The beautiful wooden yacht Cynara has been the symbolic flagship of the Riviera Group, a great treasure that the world has bestowed upon us. Our dream is to once again launch this boat in a condition as close to the original as possible, into the waters of Sagami Bay, the location of the sailing competition of the 2020 Tokyo Olympics. This dream has been with us since we began the restoration project in January, 2017, when Cynara turned 90 years of age. 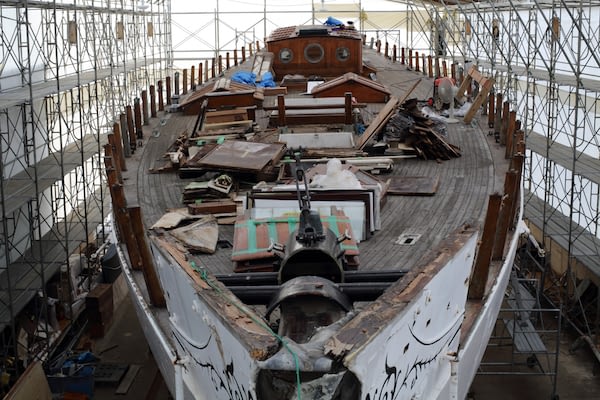 Cynara, unlike many yachts of her age in Europe and the Americas, had never undergone a serious restoration, having spent 45 of her 90 years in and around Miura, Japan. In December 2014, a plan was first devised to send Cynara to Europe to be restored and find a new life in the waters of her birth, and representatives from the UK’s Royal Yacht Squadron brought a marine surveyor over.

It was an unexpected struggle just to raise the Cynara from its mooring in the harbour onto the dock. Lifting it out of the water wasn’t easy, but moving it to where it could be studied–some 50 meters away–required a technique used for relocating old private houses. She made her way across the dock only a few centimeters at a time, on a journey which lasted several weeks.

The results of the survey suggested that some 70 percent of the materials used in the boat’s original construction could be reused after restoration. Meanwhile, in January 2015, the location of the restoration was changed. it was decided to keep the project of the Cynara in Japan, an unthinkable idea when it was first floated. 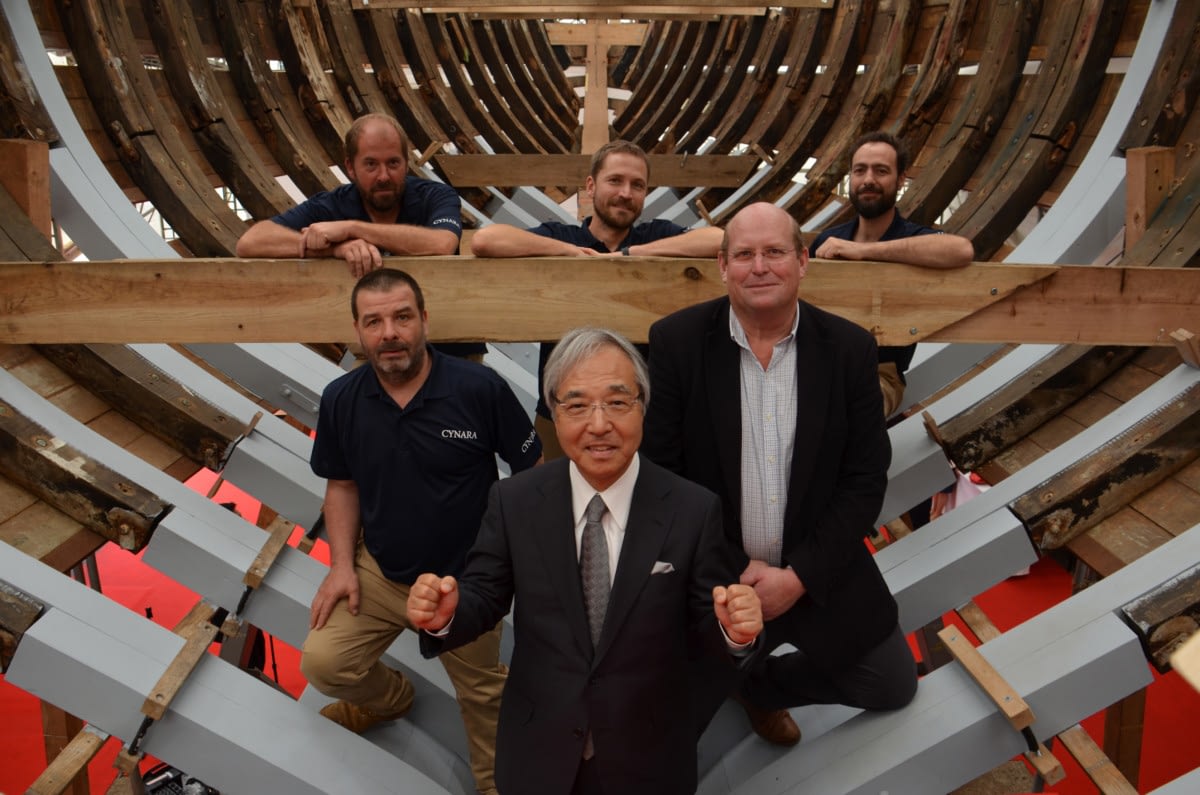 While Japan’s shipbuilding technology is world-class, it’s a different story when it comes to completely restoring a British wooden sailing ship that was built almost a century ago. Despite the challenges, the decision to keep the project in Riviera’s home port at Seabonia Marina meant inviting engineers and craftsmen specializing in ship restoration from overseas and having them work with local Japanese carpenters. This international cooperation would give the project a more educational aspect, helping pass on the unique techniques and craftsmanship used in building such yachts. Now, we’re proud to say, Riviera Seabonia Marina’s special dock is home to some of the world’s best shipwrights, coming from ten countries all over the world to share their skills. 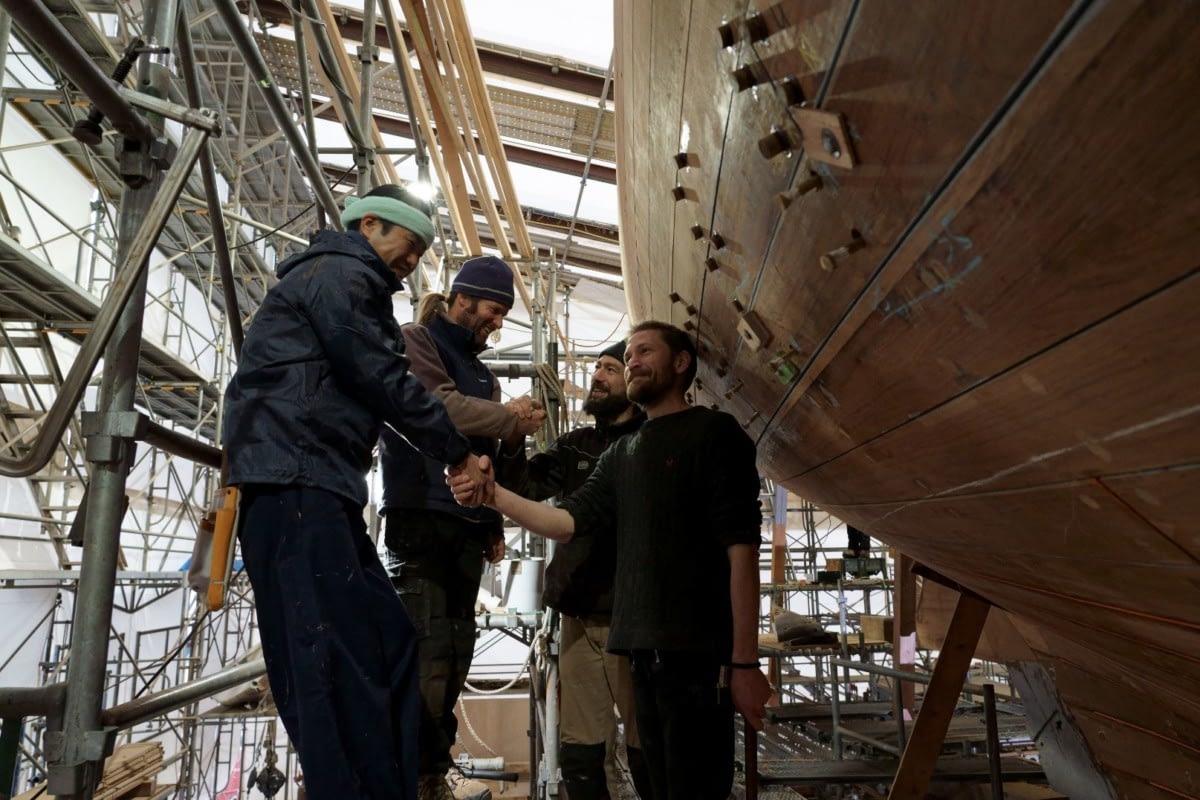 We are proud to be able to partake in the restoration of Cynara, as it is one of the most prestigious ships we’ve ever worked on. It’s a rare opportunity for craftsmen from Europe to come to the distant land of Japan and work with local engineers to restore a ship. We’re impassioned by Riviera’s ambitious vision, and have been working with the fully motivated staff. There are many differences between the Cynara’s birthplace of the UK and Japan, which add to the challenge. But we can’t forget that the craftsmen who built this ship were also putting their heads and hands together in challenging  conditions.

Cynara will once again gracefully traverse the world’s oceans, and we look forward to sharing with Japan the pride and joy that the vessel’s former craftsmen must have felt. 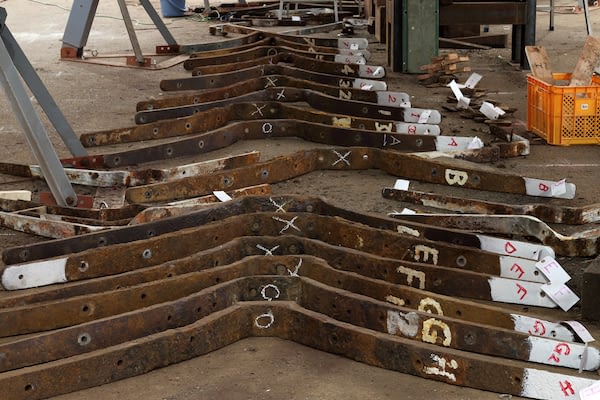 With the boat safely ensconced under a special tent on the dock, the dismantling work on Cynara began in April, 2017. After removing each part one by one, in a very specific order, pieces were marked with tape indicating their order of placement and then stored in racks. The first thing the Japanese staff at the site learned from Master Shipwright, Paul Harvey was to “always remember the four letters: P (Portside), S (Starboard Side), A (Aft), and F (Forward) and write them on every part.” As the work proceeded, the quality of the work by the original shipbuilders 90 years ago became so obvious that their pride and passion was tangible. 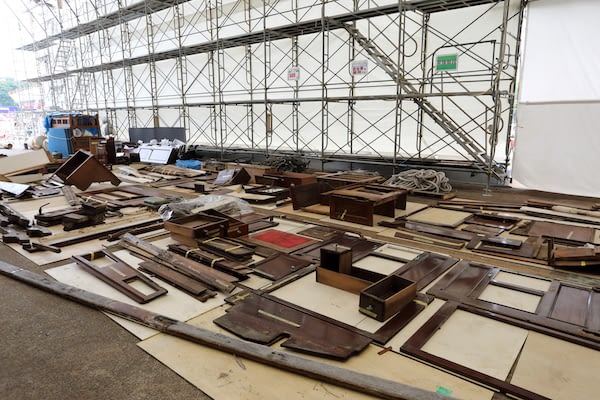 The Keel and Frames 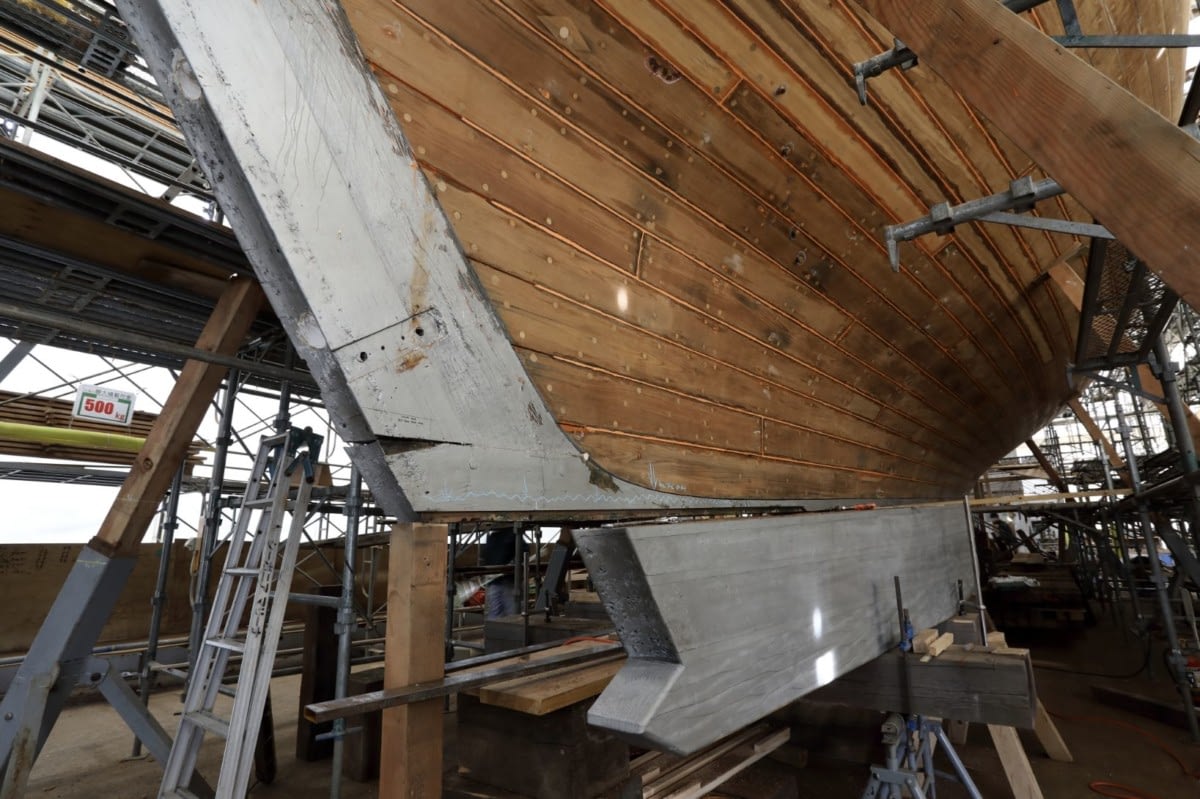 After Cynara was disassembled in the workspace, two large bronze plates of about 3 square meters in area were discovered, a repair job, it seemed, taken after she hit something with her keel ahead of the lead ballast. Clearly needing to take her back to original strength, her frames in this area were replicated with new wrought iron laminated items that were some 50 percent stronger than the originals. In addition the bronze plates were reinstalled, resulting in a very strong structure in this part of the boat, well in excess of the original design. This stage was completed in April 2018. 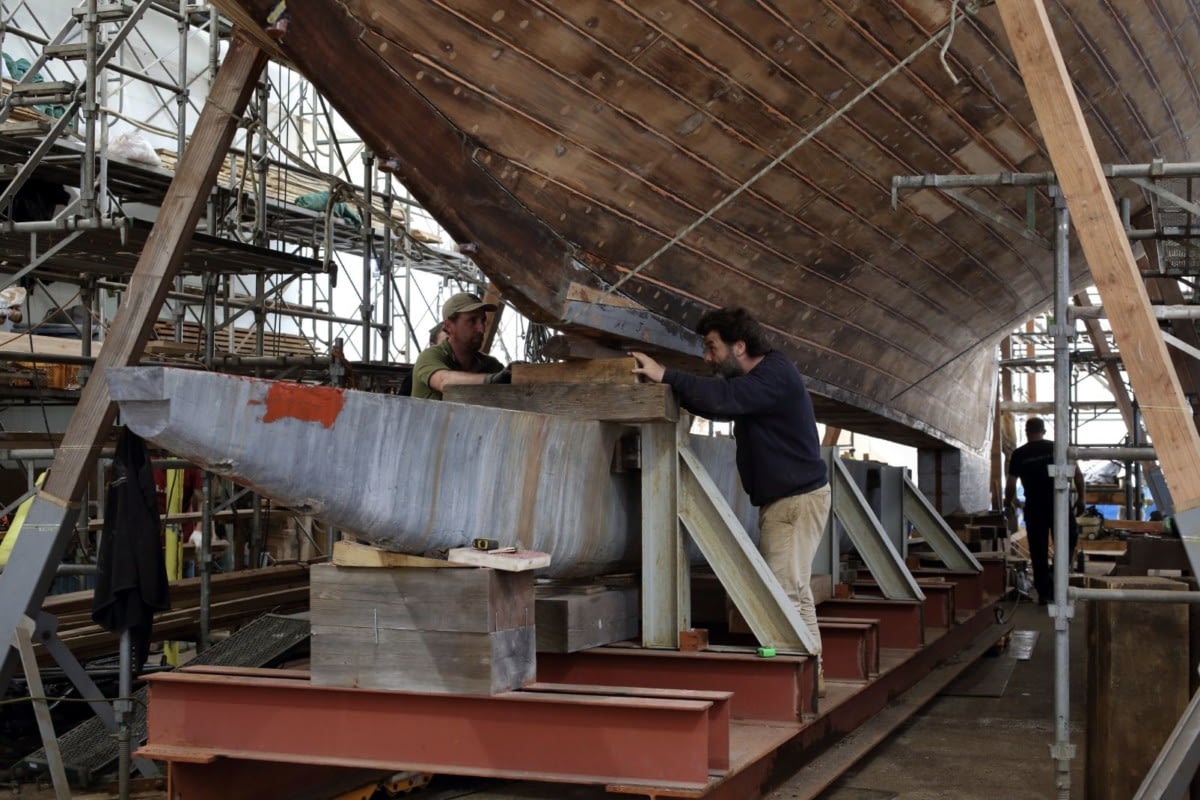 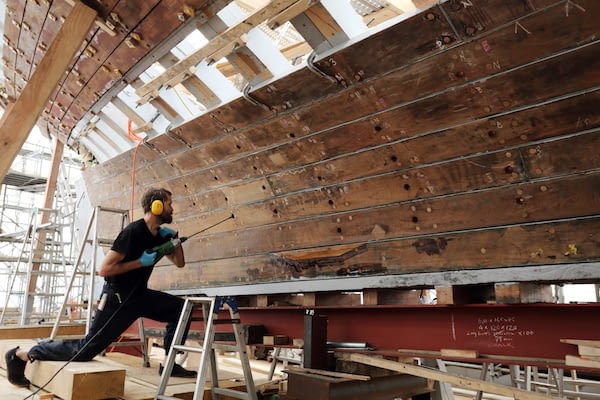 Restoration of the hull planking began soon after the dismantling with the removal of paint on the ship’s bottom. Despite the huge task, restoration leaders Paul Harvey and Ben Hobbs banned the use of power tools on this task to avoid damaging the outer planking, and a three-man team did the entire job with hand-held scrapers. The idea to minimize any damage was made knowing how difficult it is to find teak planks of the same length, which pushed the team towards maximum salvation of anything that could be reused.

The outer skin of the hull “curves, warps and bulges,” making it almost impossible to reproduce the same shape using new teak planks that are straight. Eventually, however, 92 percent of the original teak planking was used. The replacement of only one section was made from a seven-meter-long plank of teak, which was found after searching Japanese sawmills far and wide. The complicated warping necessary to make it fit was accomplished by means of a slow and deliberate steaming method.

Even for experienced craftsman, adjusting a new plant to match the others is a painstaking and uncompromising experience. After the final placement, which took place on February 2019, our persistent and dedicated documentarian photographer, Yoichi Yabe, was asked to wait until the following day to take a ceremonial photo. 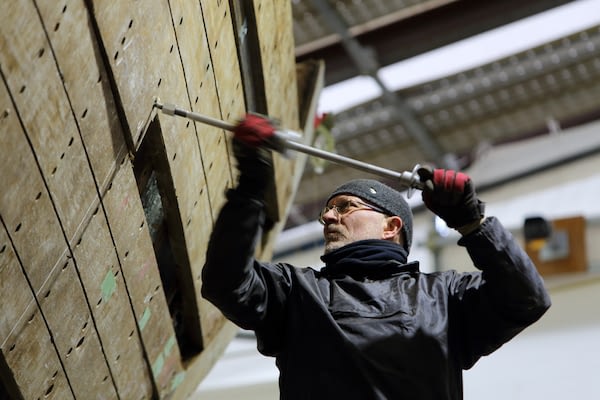 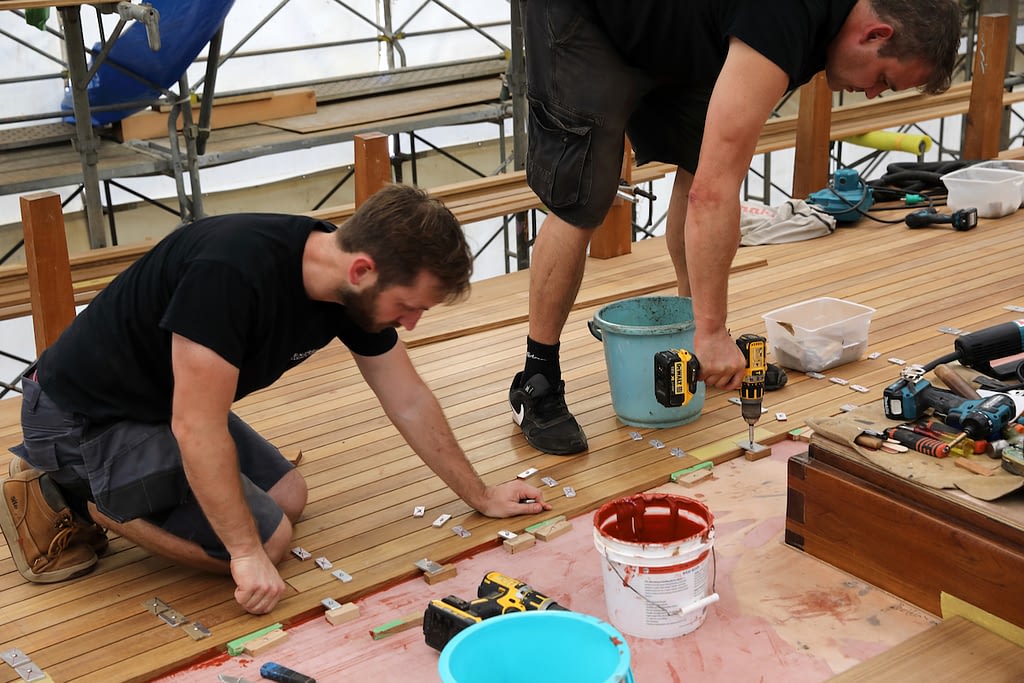 It was obvious from the start that Cynara’s original teak deck would have to be replaced, and work began to remove it in the second half of July, 2017.  It was a backbreaking job, especially in the heat of mid-summer. The teak had grown extremely stiff over the years, and had to be broken into pieces in the process.  As the deck was made of only one layer, the footing was precarious, and safety an issue.

In accordance with the plan to use as much of the original material as possible, some parts of the teak planks that were removed were used to make dowels for use in the restoration.  And even though the wood had become dry and grimy, its original brilliance could be restored simply by shaving the surface, proving the strength and flexibility of teak as a valuable building material.

After much of the structural work on Cynara had been completed, the new teak deck installation was laid between September 13 and October 18, 2019, by six expert shipwrights. The new deck is made up of three layers: a ceiling layer, a layer of plywood, and the top teak surface layer.  This design resulted in a deck that is far stronger than the original; it can be easily maintained and, if necessary, restored in the future.

Over the month of installation, the team worked long hours with extraordinary focus and dedication to ensure the deck would meet the high standards of the Cynara restoration.  The finished deck is a tribute to their efforts, one that is sure to last for at least another century. 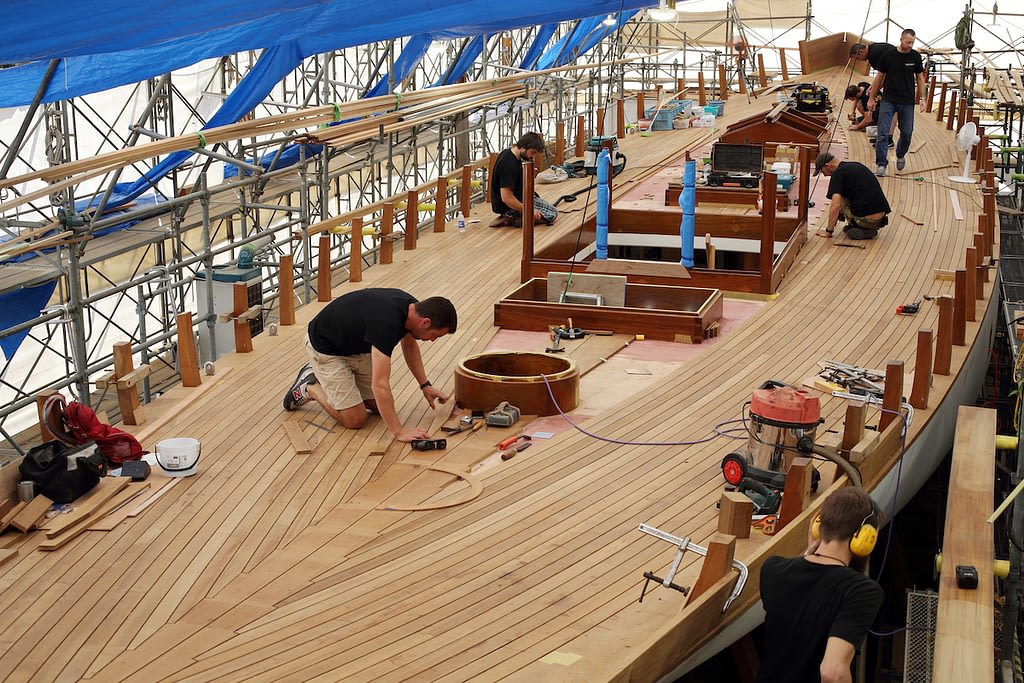