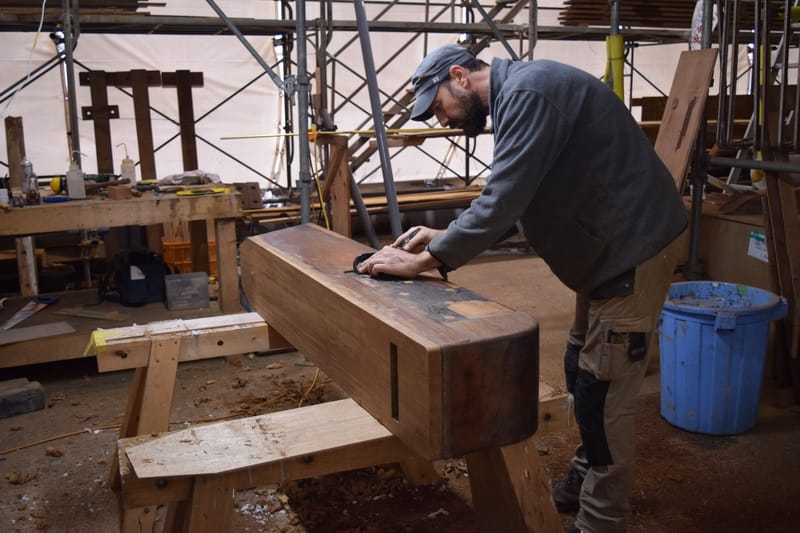 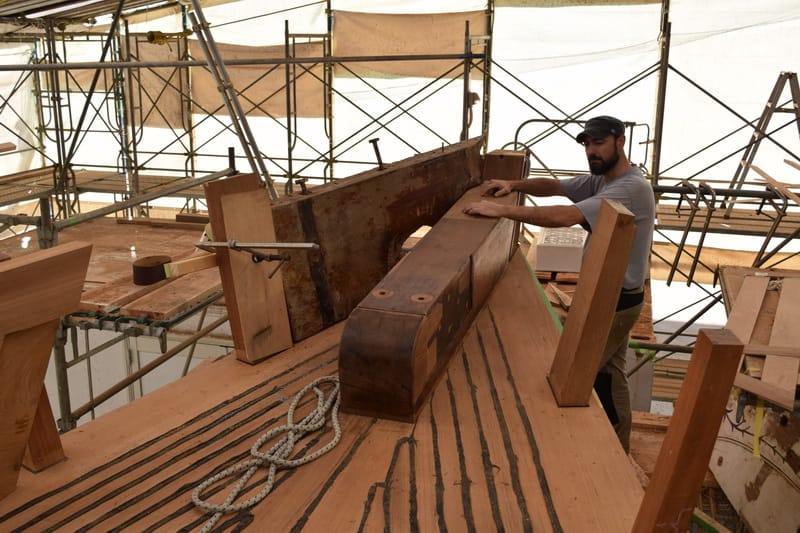 With the deck planking done, we have the entire deck as a workspace. Nico is working on the bowsprit chock, and can now put in temporary place to make sure it fits. It is a sizable piece of wood and is all original. 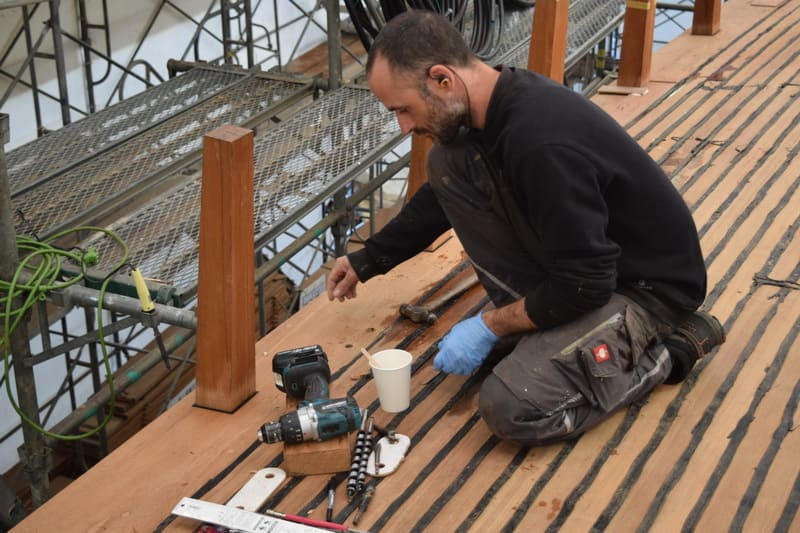 Further back, Richard is drilling and setting out deck fittings in the coverboard. 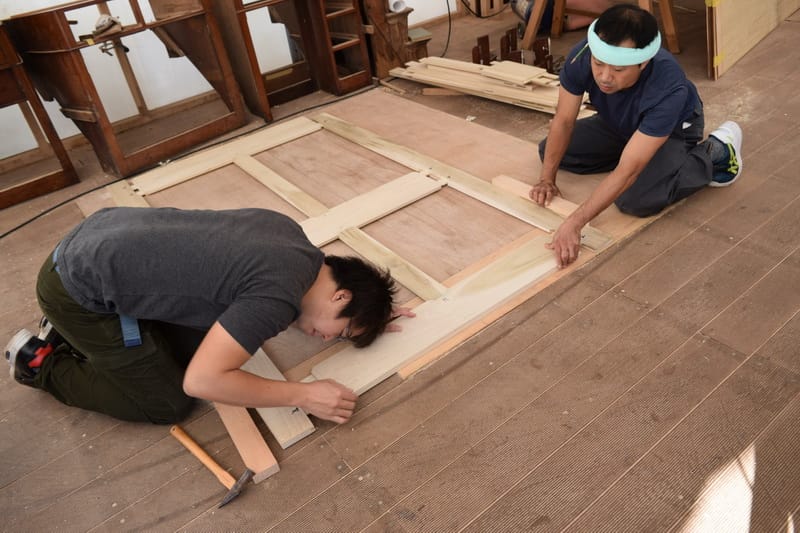 Tatsumi and Kawashima are working on the wall partitions for the interior. The wood is poplar, not often used in Japan. Paul says he chose this because it works well for painted surfaces, and because Camper and Nicholsons, who built the boat in 1927, used it in the original. 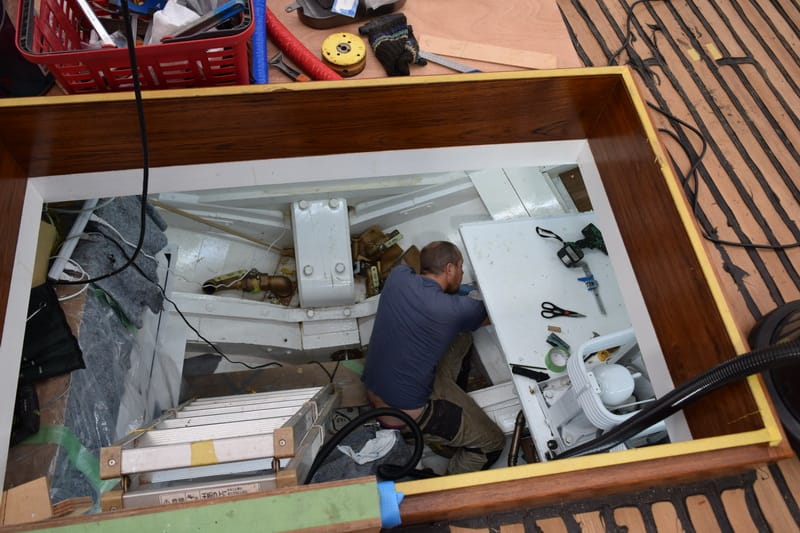 Richard, the engineer, is in his element in the engine room, and he can get possessive over his responsibilities (“This is my room,” he jokes.) It’s partly true: there is more engineering than woodwork since everything—metal tables for the generators, the engine, pumps, etc.—all have to be set up correctly for the engine to be easy to use and maintain in a limited space. 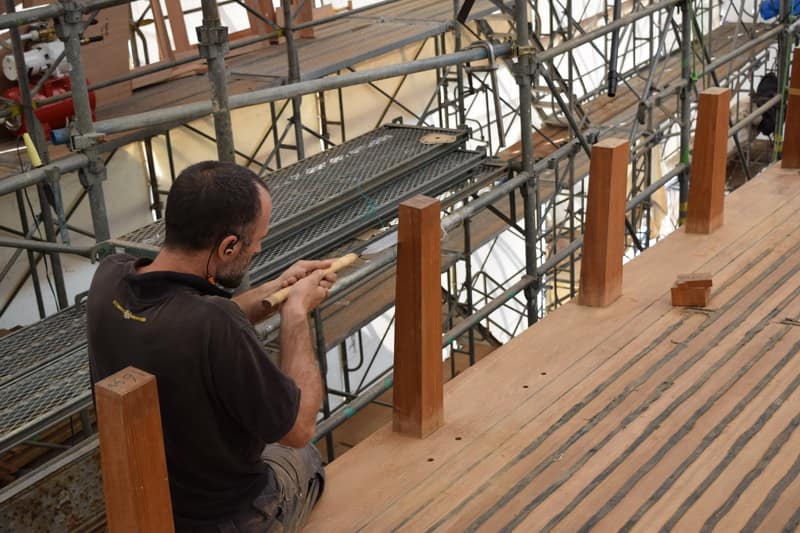 Richard the carpenter’s next step on board is to cut the top of the wooden stanchions down to the correct height (above) while another Japanese team member sands the coverboard, preparing for the first coat of varnish (below). 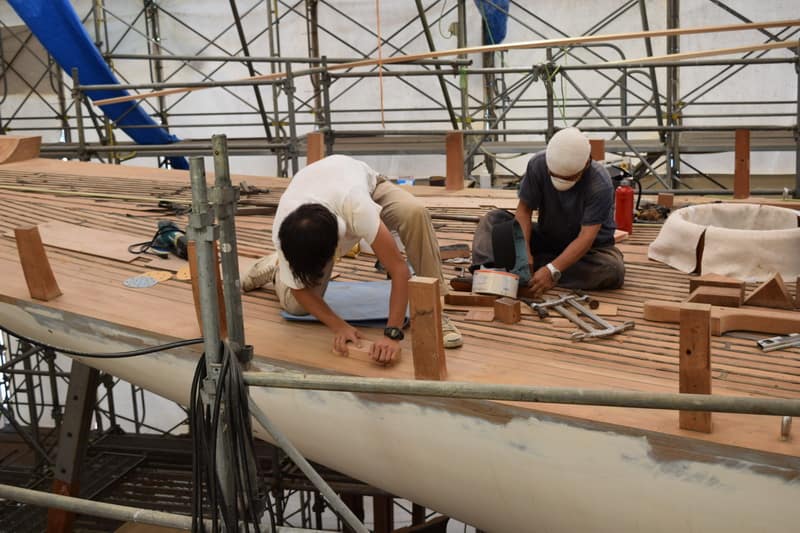 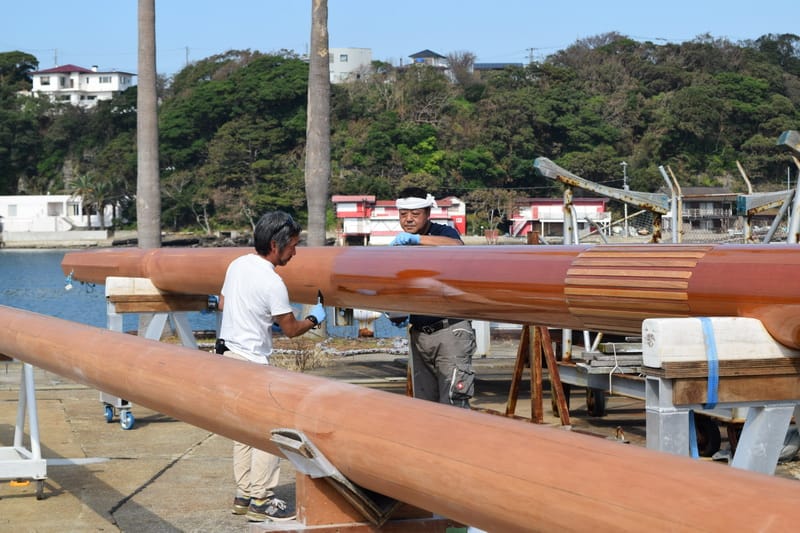 Wada has taken a central role in the varnishing of the masts, which have become much darker in tone after many coats. It is a repetitive job that requires a lot of concentration. 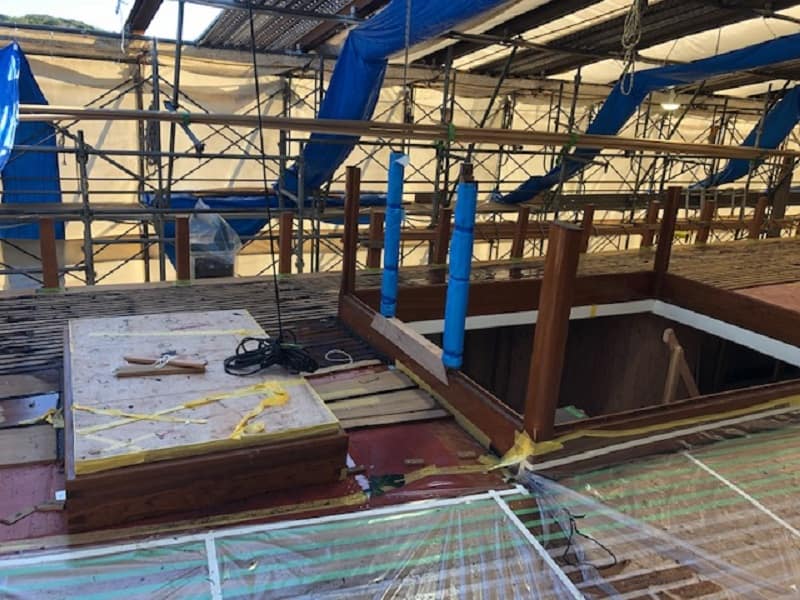 Typhoon Hagibis made landfall last night just west of us on the Izu Peninsula. It ended up being one of the largest typhoons ever recorded, with over 200,000 people ordered to evacuate, and the matches for the World Rugby Cup cancelled. It was fairly violent at our location, so we ended up being extremely lucky. Parts of the main tent blew down, and the deck has been saturated with water despite being covered with plastic sheeting. This is a major concern, as we’re in the middle of gluing the planks down. We’ll have to thoroughly dry and clean the deck before finishing the gluing.

Part of the adjacent tent where we’re doing the joinery collapsed under the weight of the water that had collected on top, but fortunately, there is no serious damage to the timber that is inside. There were a few scars and dents from wind damage, but the timber is old—with plenty of scars from its nearly 100 years of use, and there’s nothing that will be noticed.

By 10:00am the next day, everything had been restored to pre-typhoon condition, and work is being renewed in all areas of the project. 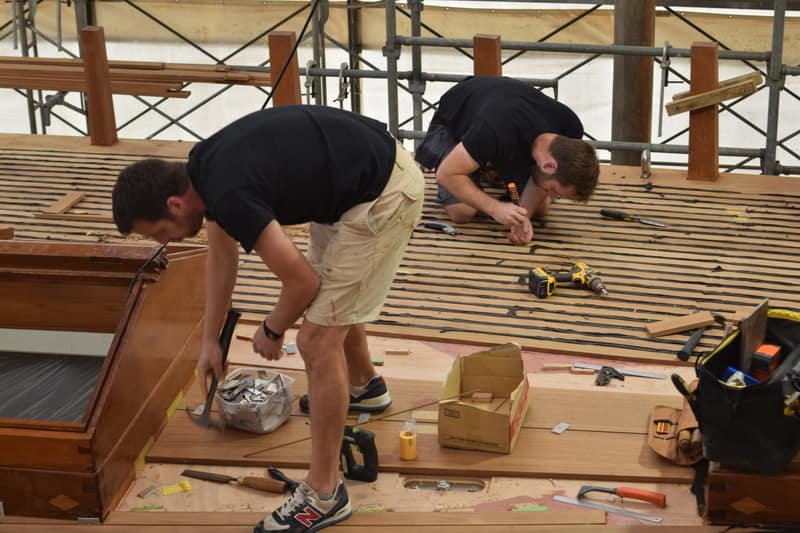 The crew from Centerline Marine is back laying the deck. Some of them have started caulking while others are still focused on the planking. They are using a liquid rubber compound in the seams to form a rubber seal between the planks. 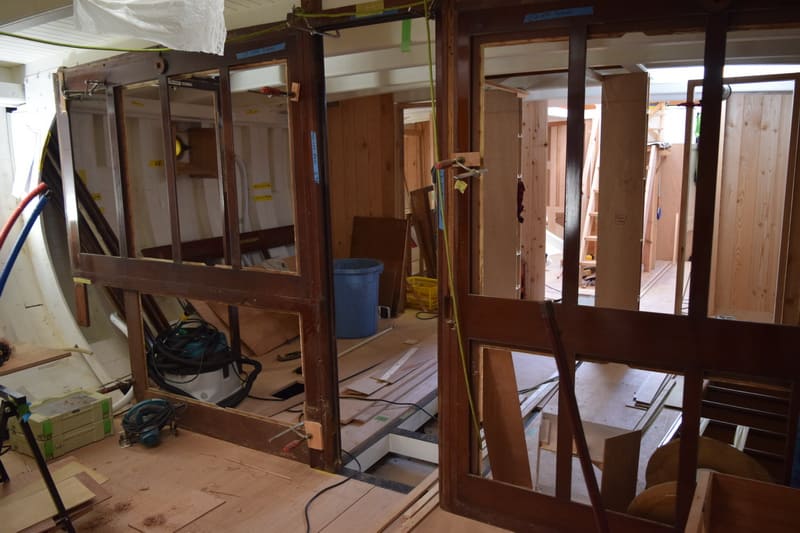 Work is continuing on the interior. Here the original bulkhead framing is being installed in the aft end of the main saloon. 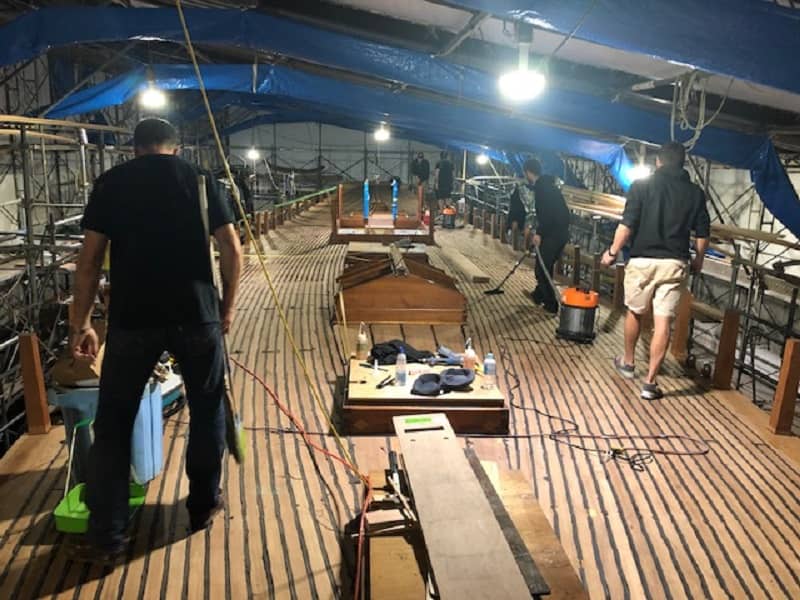 The planking and caulking of the deck is finished, and the six-man team, who have been working dawn until dusk, will leave next Monday. The height of the finished caulking actually is higher than the teak planks, but it will shrink over time. It will be left like this for at least a couple of weeks to set, harden and shrink—the longer the better. It will then be cut and sanded flush with the teak planks.

Leaving the sanding as long as possible also protects the teak, since continuing work on the deck will get it dirty. Once the teak is sanded, it must be kept clean or the final appearance of the deck will be spoiled.

According to the plan, Paul and the other members of the crew will do the final sanding around the beginning of December. 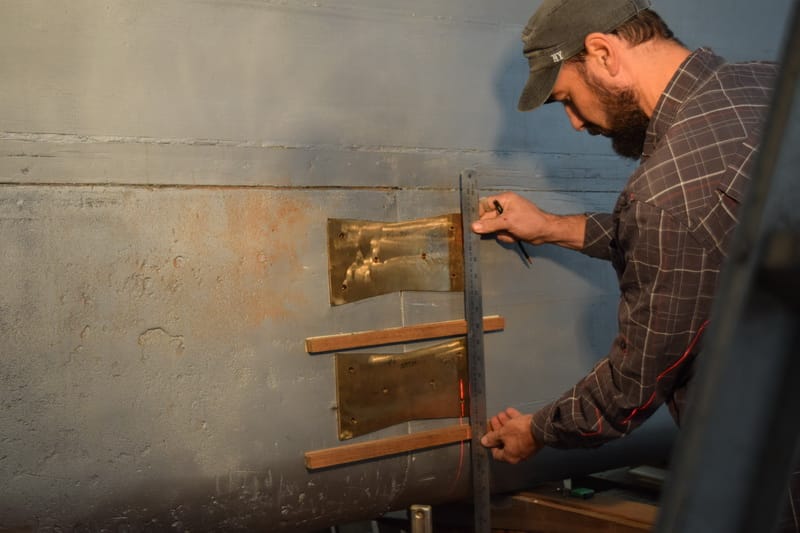 Nico is fitting two naval brass dovetail plates between the lead ballast keel and the wood false keel. The plates are riveted through the keel, which helps stop any movement between the two. Work on the rudder has begun (below) and the work on the keel must be finished before the rudder is installed. 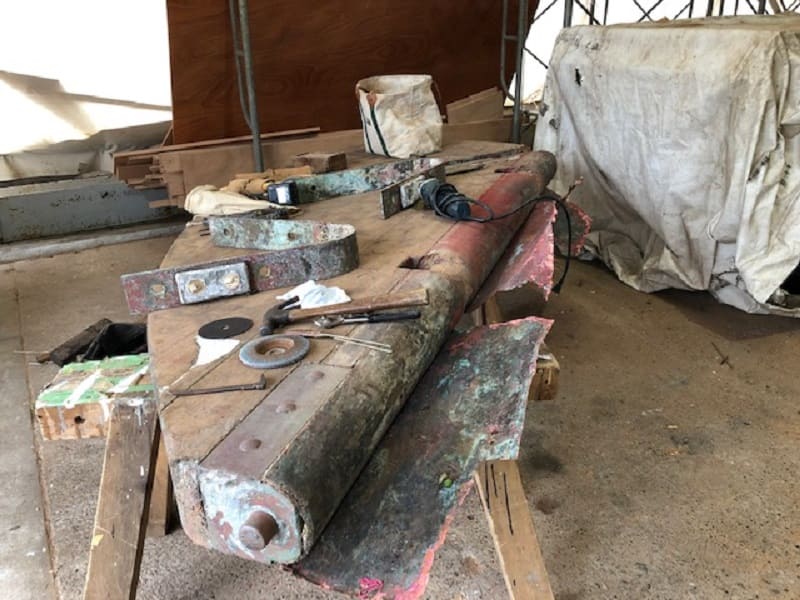 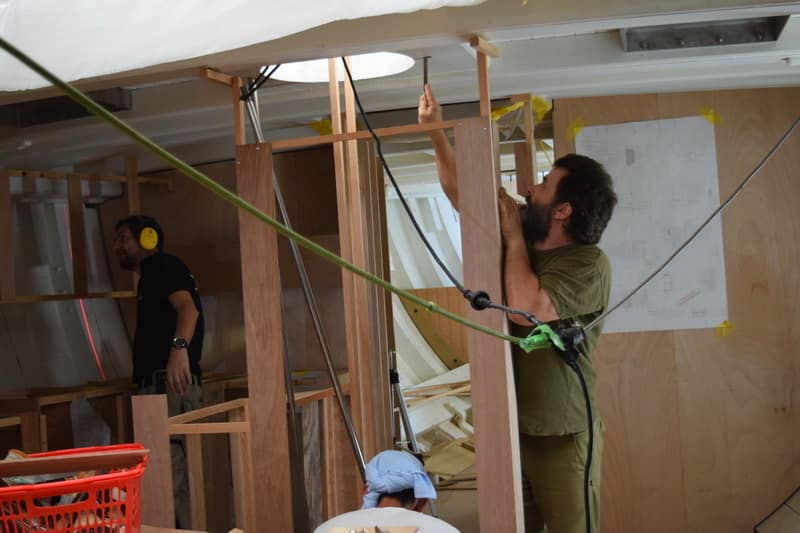 As we enter October, the temperature has fallen, which has made life a little easier for the shipwrights. But we’re still in the middle of typhoon season, and Cynara is protected only by a tent. A smaller tent stands adjacent—where work on the interior, the masts and the spars is being done. 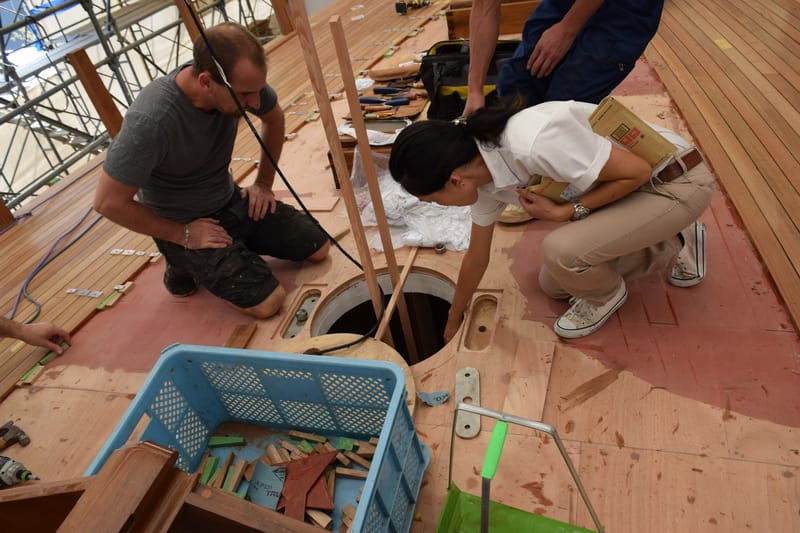 Paul and Carlos (above) are onboard in the galley area, where the mast will pass through. They’re using temporary patterns and frames to check the positions of where the bulkheads and furniture will go.

On deck, Ben is fitting the rods that connect the deck to the hull. The rods are bolted through the deck and run down alongside the mast and into the mast step, and firmly bolted to the keel. They add strength around the mast, as the blocks and rigging will be putting high loads and stresses on the deck in this area. 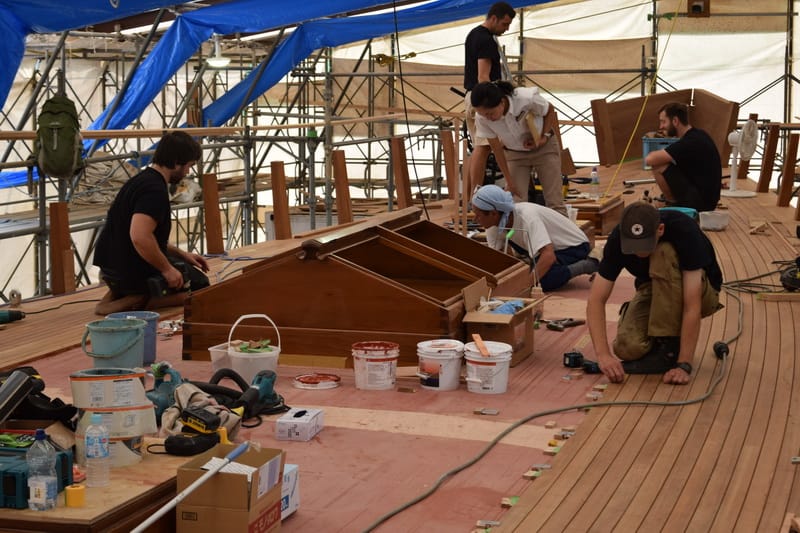 A team from Southampton in the UK called Centerline Marine was brought in to lay the teak deck planking. Teak laying is a very time-consuming process, so this allowed Riviera’s team of shipwrights to focus on other tasks. The deck beams were first covered with a plywood sub-deck, which was first “faired” to ensure there were no high spots or hollows. Then the teak planks were laid on top, one by one. Each plank was machined to include the seam for caulking before they were glued down. 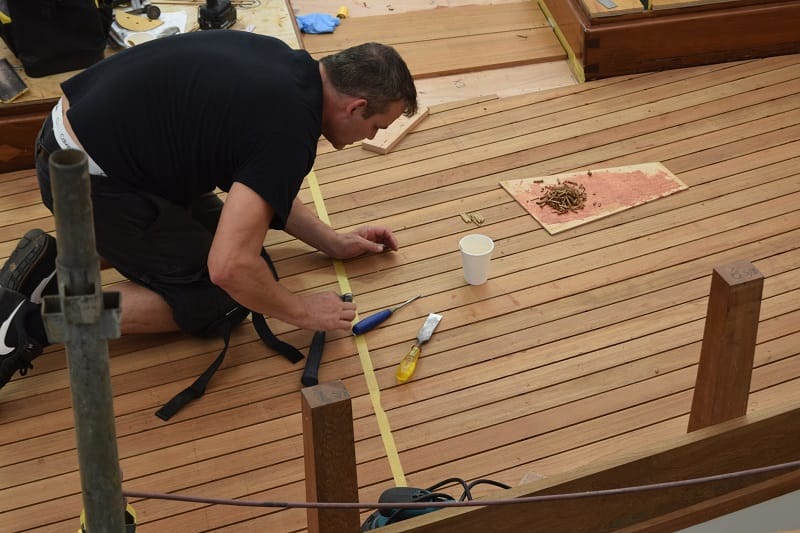 Mike, from Centerline Marine, is removing any extra glue from the caulking seams. He also has to cut the butt joints between each plank end. 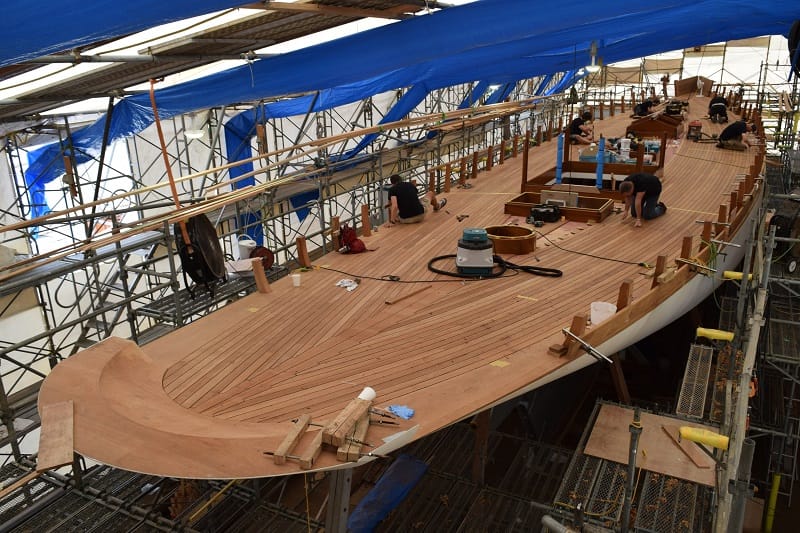 You can see from this photo that the planking is almost complete. The caulking between the planks is the next part of the process. 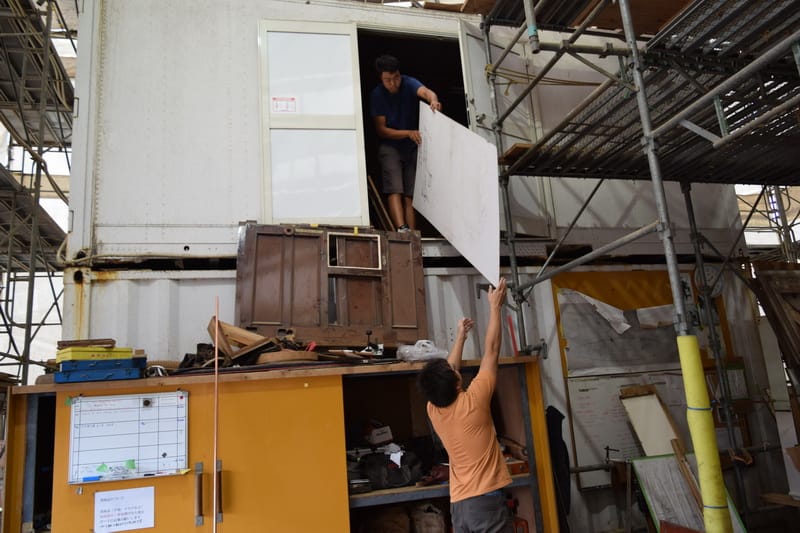 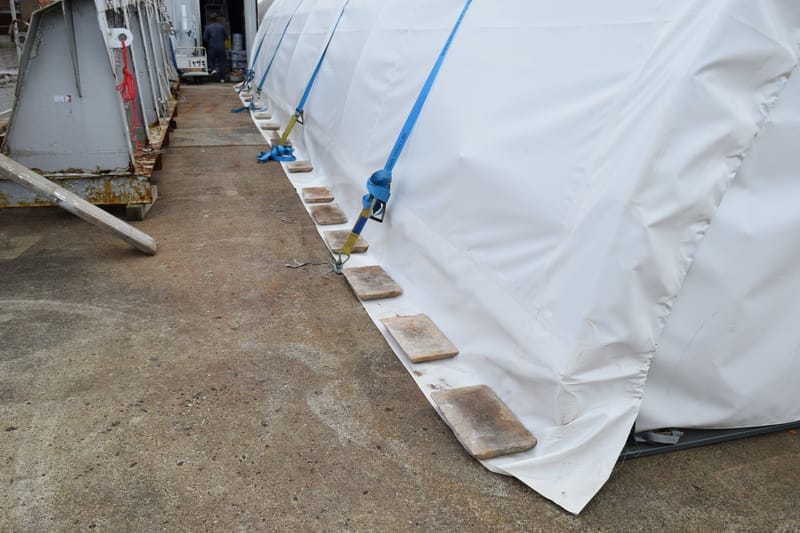 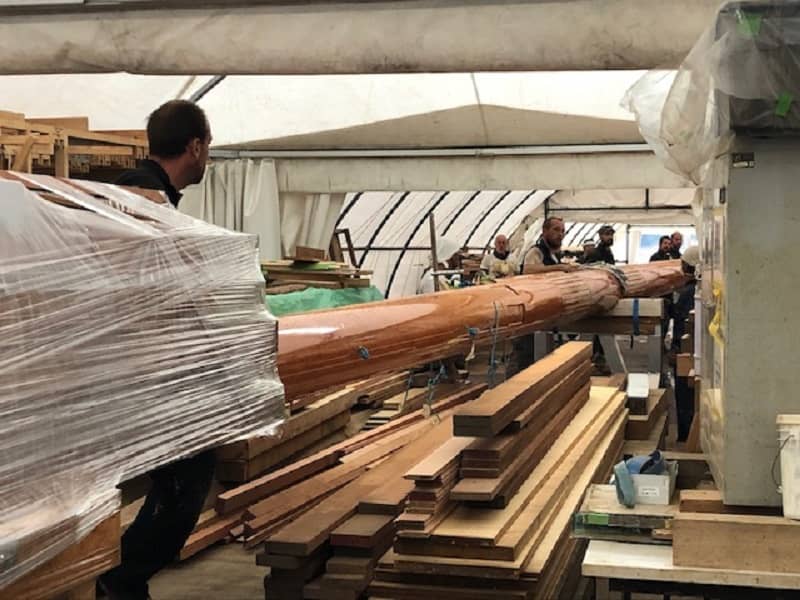 Work had to come to a halt in order to prepare for Typhoon Hagibis (Typhoon 19, as it’s called in Japan). We are storing all the important interior fittings, lashing the masts down (above), storing other parts in elevated containers (top) and taking other measures (middle) to protect the tents from the wind. According to weather reports, the typhoon is scheduled to come ashore very close to our location about October 12.