Our project was published in Classic Boat July 2021. Click below for more details.

Cynara featured in the June issue of Classic Boat magazine

The June issue of Classic Boat magazine featured Cynara on the cover and in a 7-page, full-color article. This came after the magazine named the restored boat as the winner of a “Classic Boat Award 2021.” 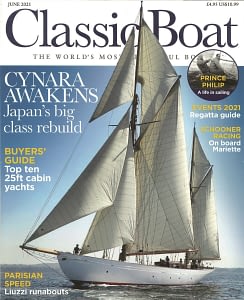 Published in Classic Boat MAY 2021

Our project was published in Classic Boat MAY 2021. Click below for more details.

We are proud to announce that CYNARA was named the winner in her category of the Classic Boat Awards 2021. The awards are given by Classic Boat magazine, and the winners were announced at a digital ceremony held on Thursday, April 15. CYNARA was named winner in the category, “Restored Sailing Vessel over 40 feet (12.2 meters),” and the award was accepted by Riviera’s Chairman Noboru Watanabe.

The inclinometer, barometer and chronometer have been installed in the deckhouse over the steps down to the passageway.

The inclinometer was on the boat, though it is likely not from the era of the 1927 launch. It was given a new face and the nickel plating was restored.

The barometer was probably an addition by one of the early owners—which one and when is not clear. It was also restored.

The chronometer was purchased at an antique shop in the UK to match Cynara’s interior. It is thought to have been made around 1910, which would make it older than the boat itself.

The legs for the deck tables in the varnishing tent. The centers of the tables are hinged lengthwise and are situated directly above the skylight. The shorter legs are for supporting the middle of the table.

Paul has finished installing the benches in the crew’s quarters, and is now working on the pipe cots. The cots will eventually be rigged with lines and pulleys to fold them away when not in use to allow seating at the table (to be installed later).

Kawashima is almost finished with the drawers in the captain’s cabin.

Hashimoto is fitting a mahogany kickboard under the galley units . . .

. . . and a molded border for the vent under the sink.

The rungs of the crew ladder were wrapped in rope to add grip and comfort before the ladder was installed (below).

An air conditioning duct has been routed around the mast and into the galley.

Paul just guided the refrigerator down the hatch. It has since been completely fitted, wired and is now operational.

Hashimoto is fitting the galley door frame columns. As with the other frames, these columns hold the light switches and are useful to hide the wiring.

Tatsumi has made a start on the remaining main doors. The doors for the crew, captain’s cabin and crew shower doors have to be made since the doors that we removed were not in restorable condition. None of them were original, and probably dated from a 1950s refit.

Pascal is wrapping up the plumbing work for the crew shower.