Nikki Wellings has come from her base in Italy to do all the traditional leatherwork that goes into Cynara’s rigging and other areas. There’s quite a bit that needs to be done, from the gaff saddles on the masts to the holders for the winch handles to the inside of the gammon iron, and to the biggest job of all—covering a large number of the boat’s blocks to prevent them from damaging the masts, decks, etc. as they move about.

Nikki, an avowed sailor who has been doing leatherwork for classic boats since 2006, is presently making the covering for the topsail tack jiggers, which swing back and forth over the bowsprit. She works in chromed cow-hide, cutting, punching and sewing the moistened leather, leaving a perfect opening that shows the emblem of Cynara and her original construction date that’s embedded in the wooden block (see photo). If the leather is taken care of, she says, it should last years, despite the salt spray and the battering blocks take.

The leatherwork, the rigging and a lot of the detailed carpentry that’s going into the interior and deck finishing takes place in a low tent next to Cynara. At one end, Keiji is finishing up the mount for the compass. The base was irreparable, so he had to make a new one, but he’s been able to restore the pieces that make up the circular mount. When finished it will hold the compass that was removed at the dismantlement stage, which is now waiting in the office.

In Cynara’s tent, preparations are underway to move her out, so that she can soon be rolled out into the open, and lifted by crane to be launched. A team of workers are welding, stacking support materials, and preparing a trolley to roll her along in a few days’ time. 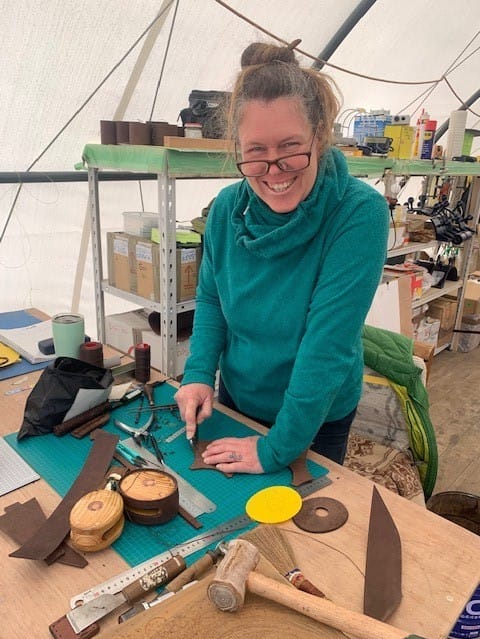 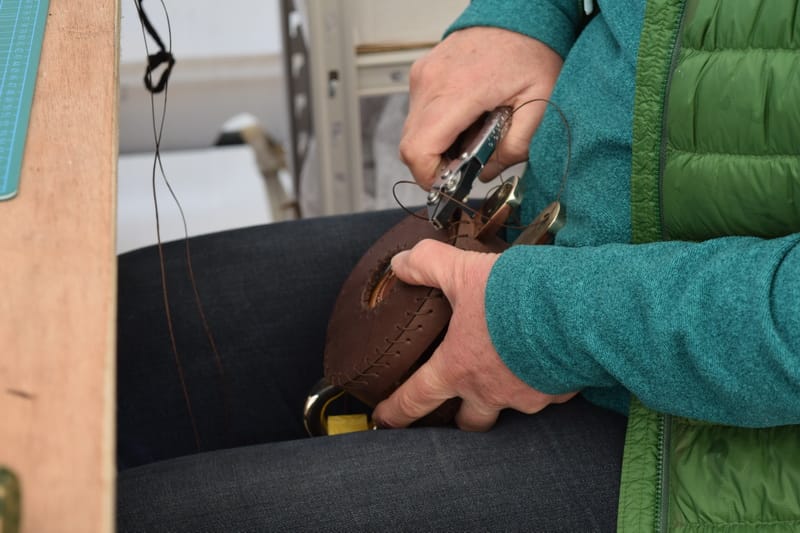 Nikki’s empire (top), where she plies the tools of her trade (above) to make protective leather covers for the blocks and other parts of the boat. 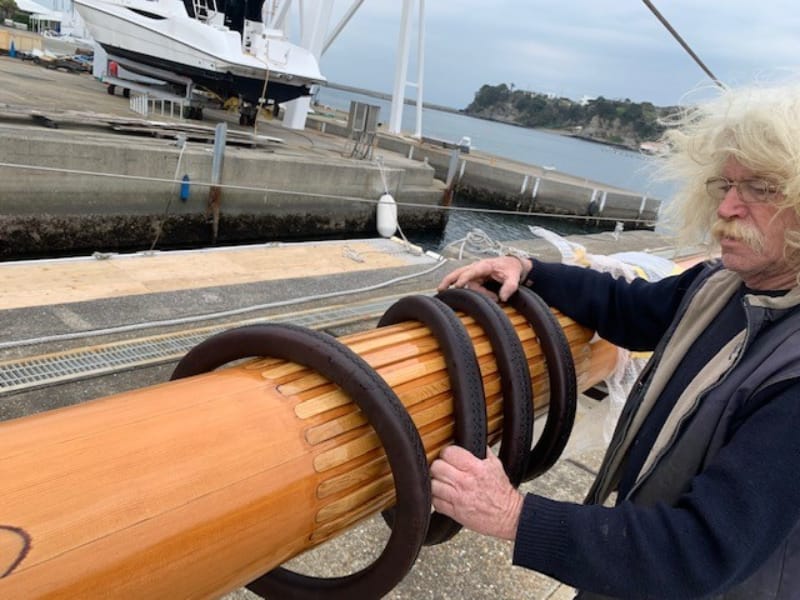 Nikki’s leatherwork is also seen on the mast hoops being checked out by lead rigger Chuck. Unlike modern yachts, which have tracks on the mast for the mainsail to slide up and down, a classic yacht employs sliding hoops, which are covered with leather to slide easily. 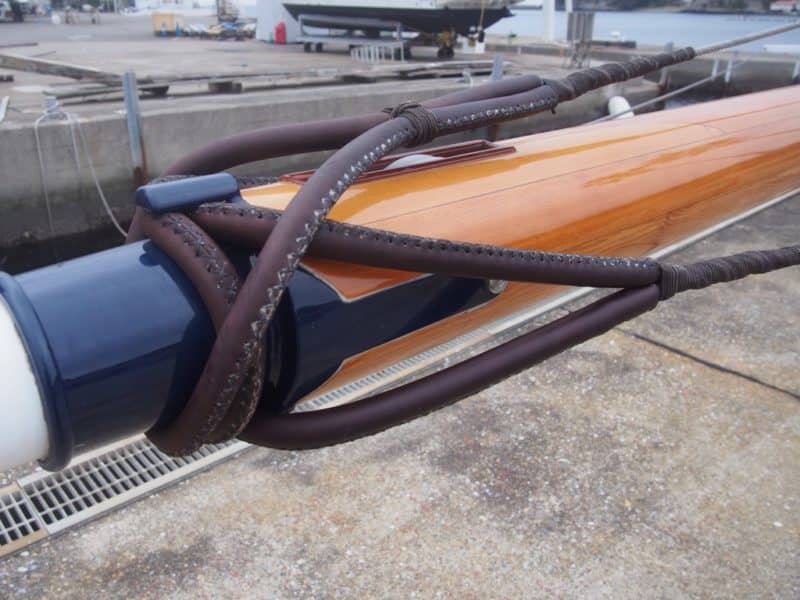 Leather also has a place on the topmast shrouds. Even at this high point on the mast, where few people will see it, Nikki’s leatherwork is exquisite. 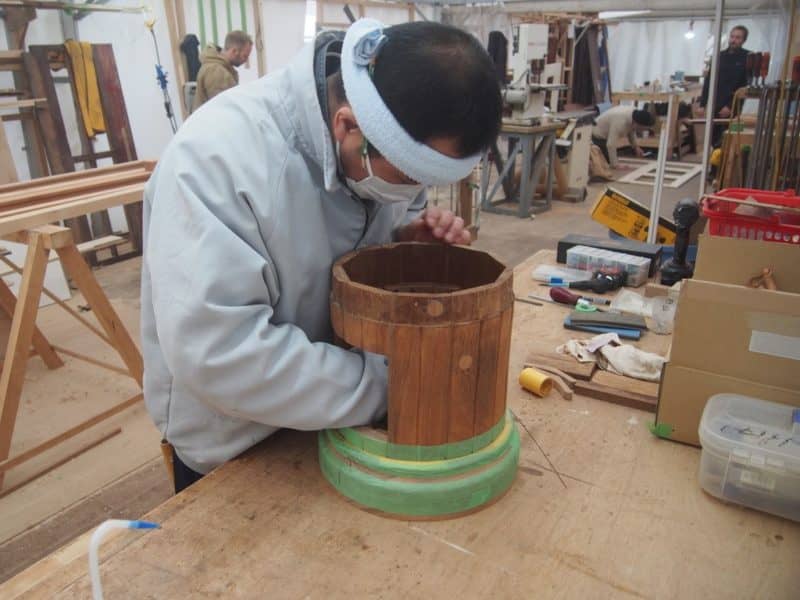 Kawashima is restoring the mount (above) for the compass (below). 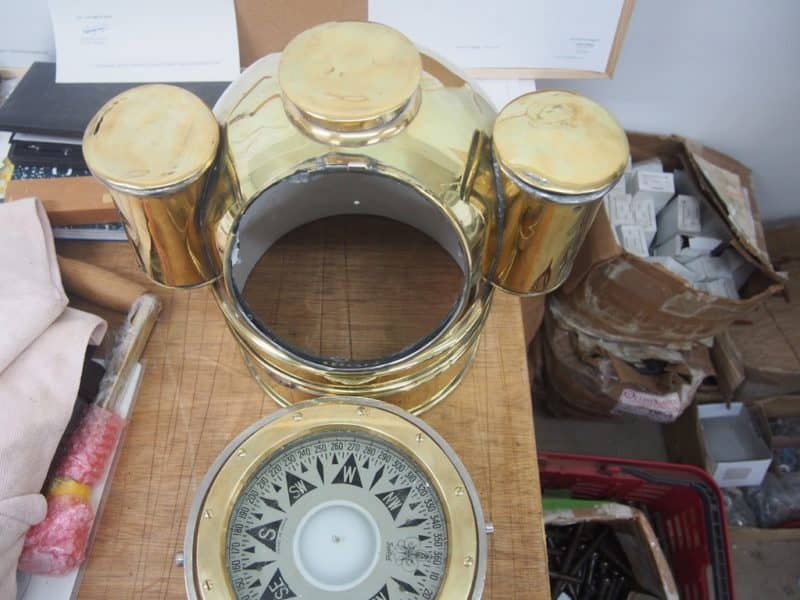