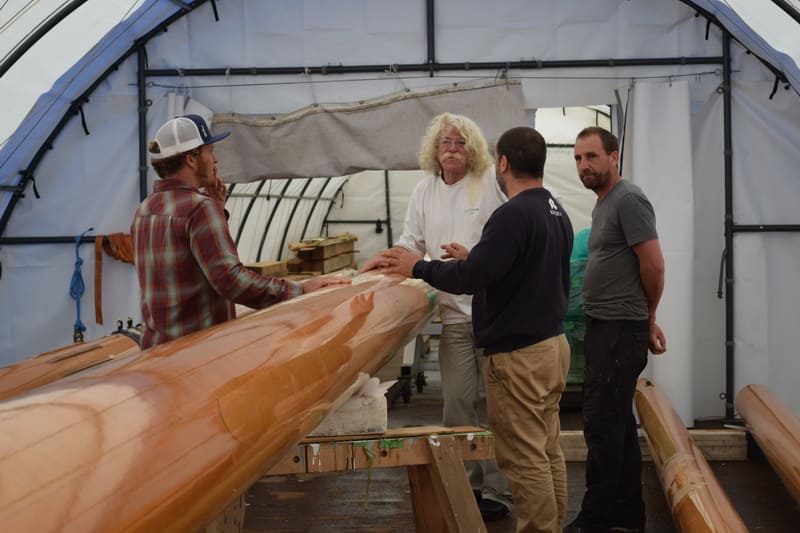 Chuck began work today, as did his assistant Nat. Paul and Ben brought them up to speed on the restoration. 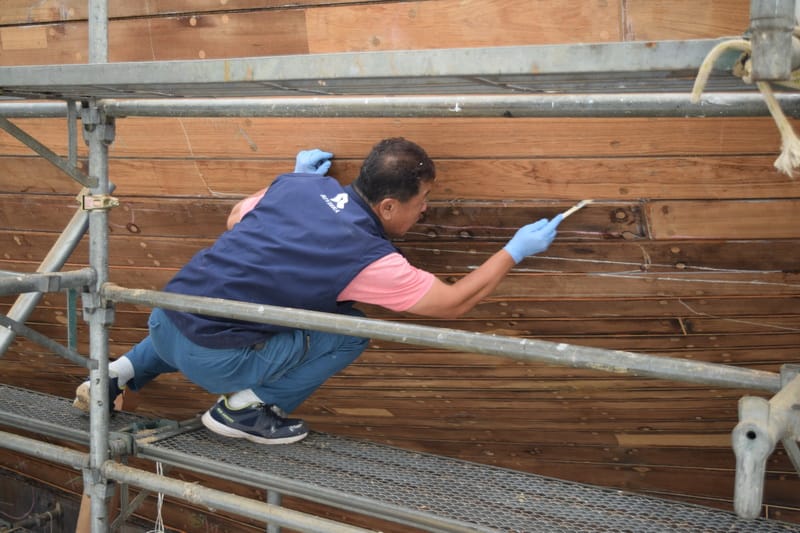 The seams between the planks are being cleaned before being painted with a primer. 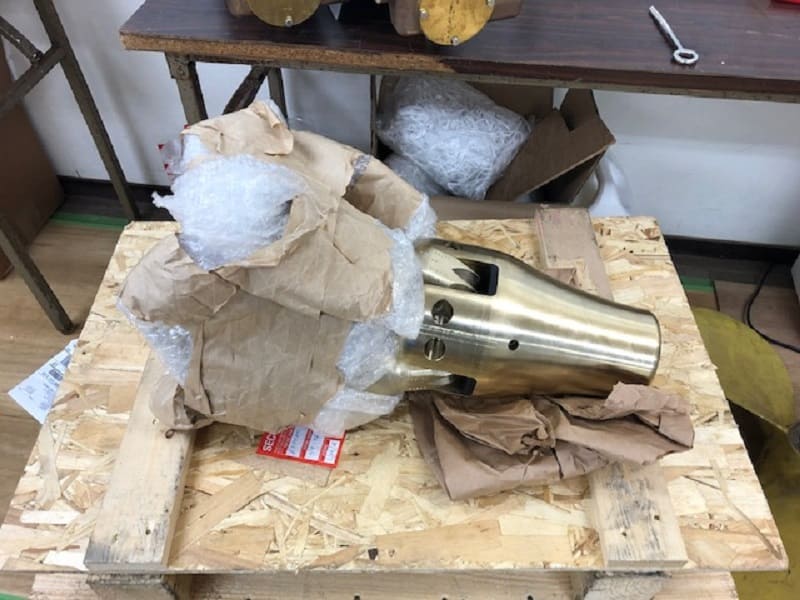 The propeller also arrived today. It has folding blades that swivel flat when Cynara is under sail, which minimizes drag. Her previous propeller was “old style,” with fixed blades.

Despite it being the middle of the rainy season, the weather was fine, and it seemed to lift the spirits of everyone. Nat made a workbench, recycling the material from the jig that Lewis used to drill the propeller shaft hole. 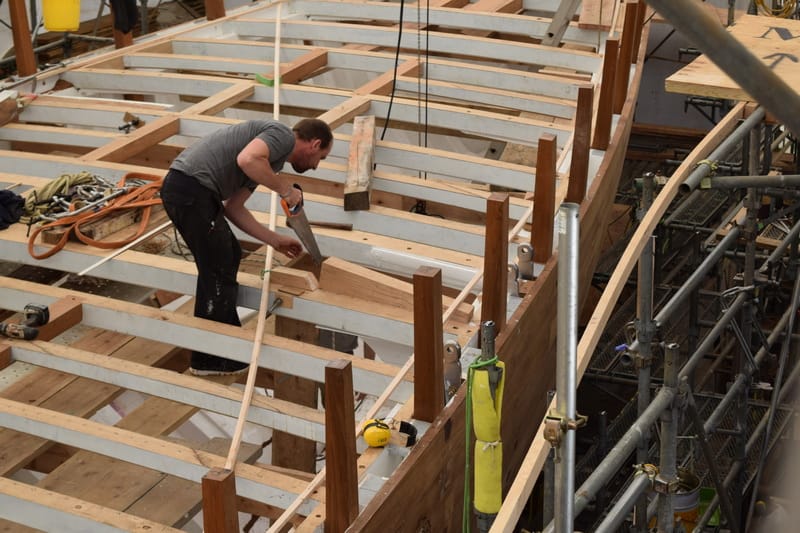 Not all the bulkheads land directly on a beam, so Ben is cutting packers to fill the space between them. A bolt will tie them together. 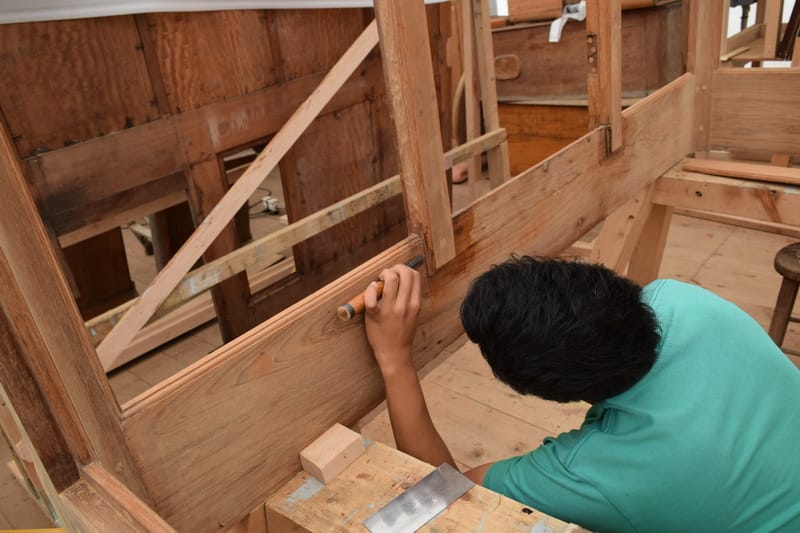 Masa working on the main deckhouse. 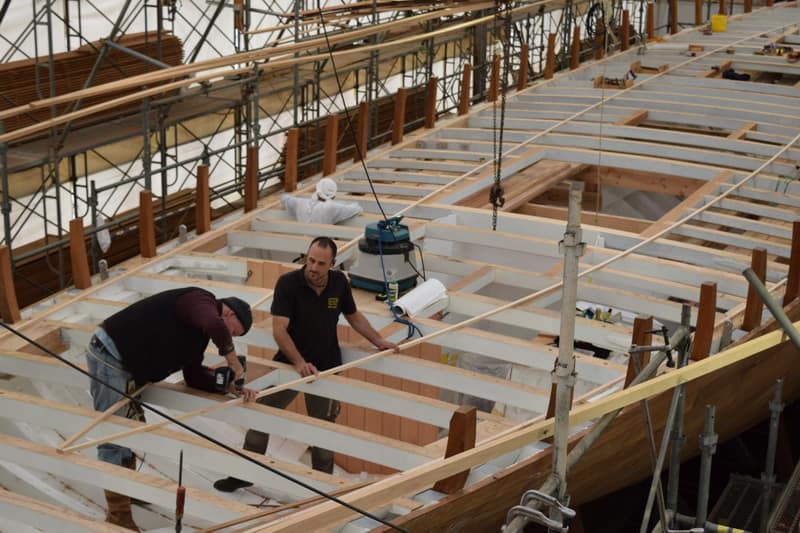 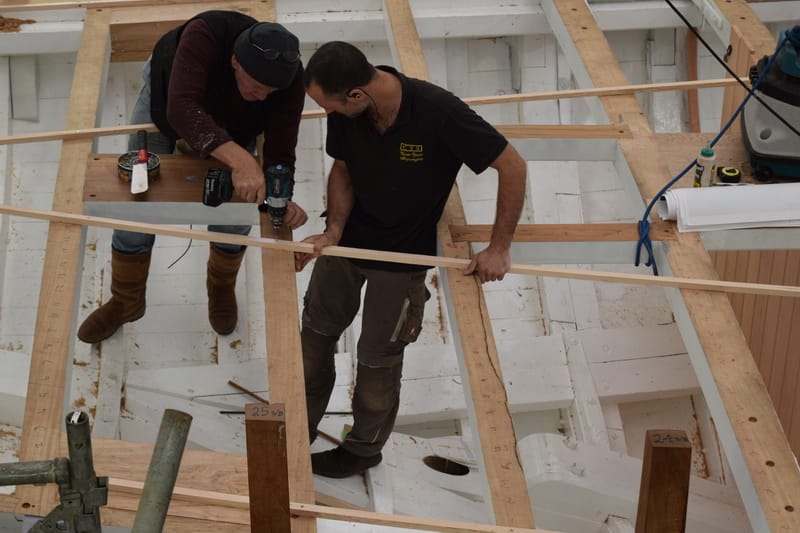 Richard and Michael are setting out the deck planking. We have to establish fair, symmetrical lines along the length of the deck to ensure that both the deck planking and the king planks (the planks running fore and aft at the center of the deck) are symmetrical. This also helps set the king plank widths. We can only make adjustments at this point, not after we start laying the deck planking. Also, because we’re making a composite deck, the cedar planking on the underside of the plywood must mimic the teak planking that goes on top. We use the data to fix the planks under the plywood on the same lines as the teak planks. 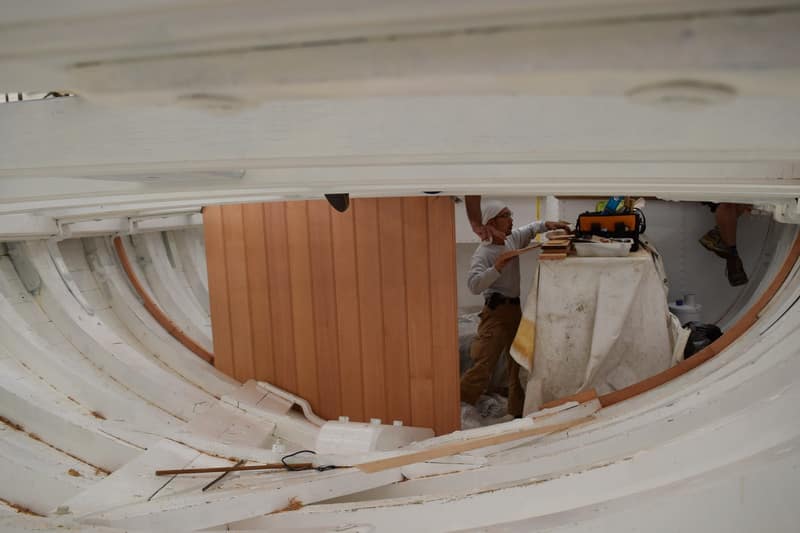 The bulkhead on the forward end of the engine room is steel, but the aft end has a wooden bulkhead that Paul is installing (above). 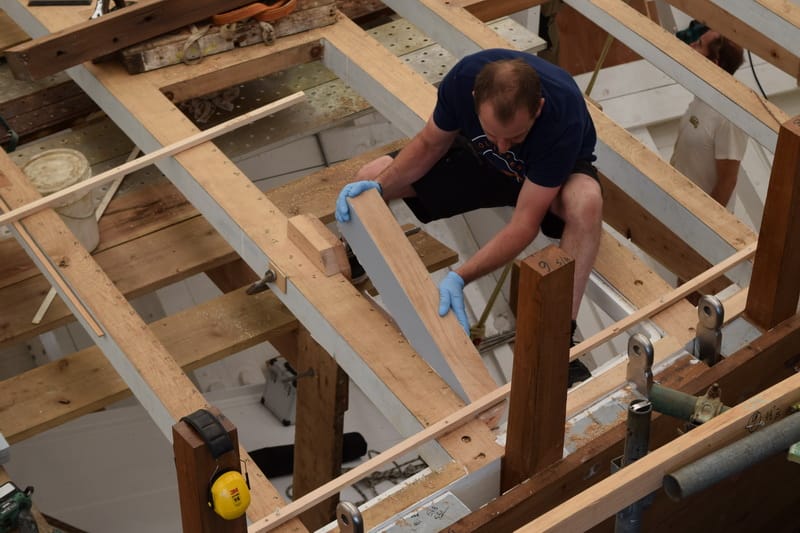 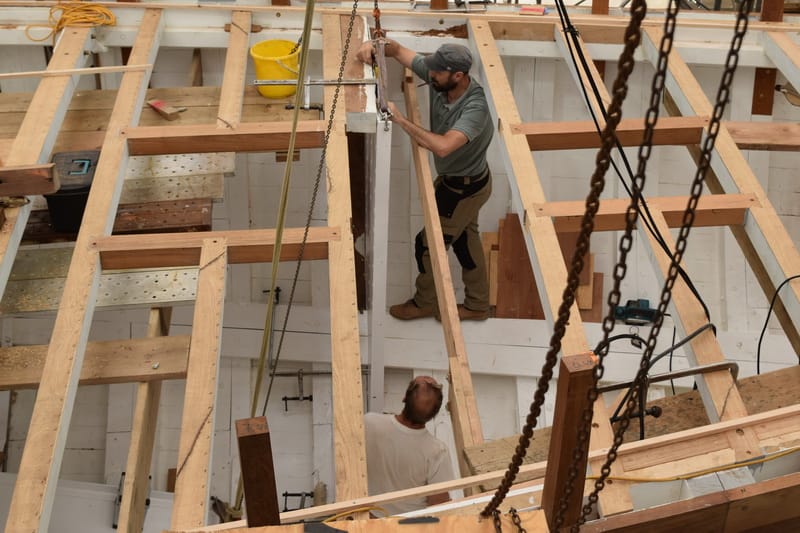 . . . while Nico is bolting the bulkhead in place after the packers are in. 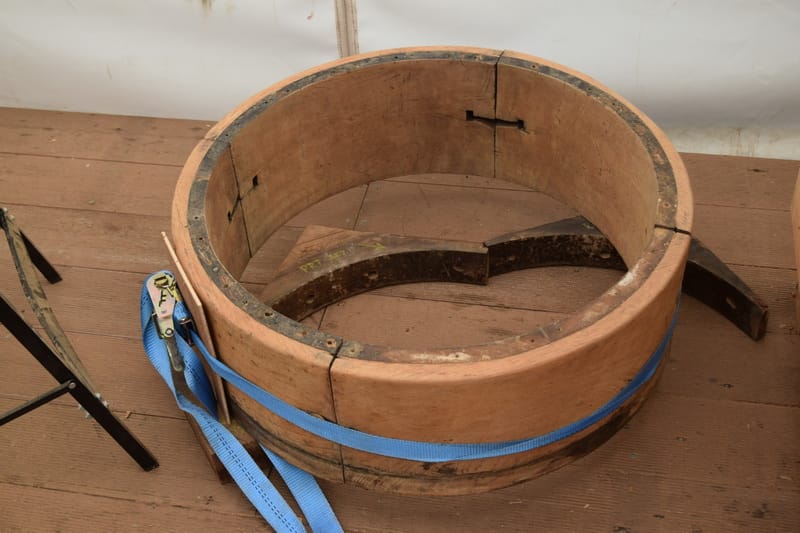 The old sail locker hatch. At first we thought we could salvage it, but the steel fasteners created issues that would have taken too much time to remedy. 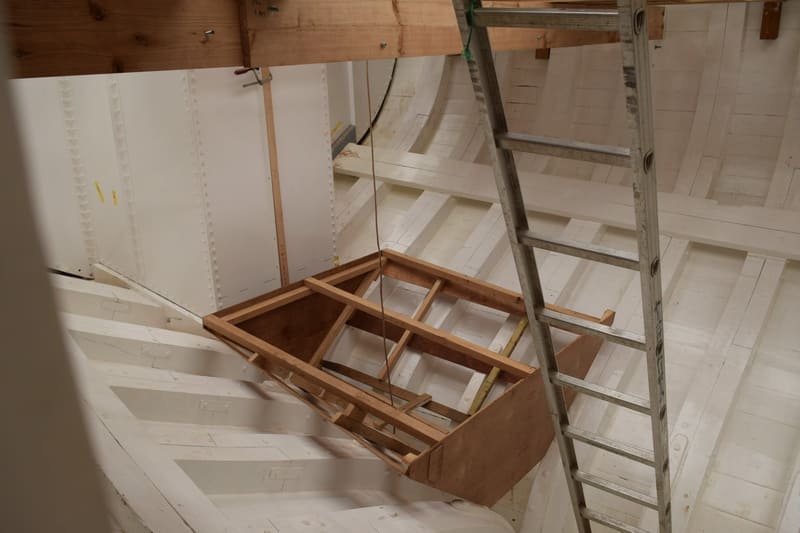 The mock-up for the tank was finished and put into place to check the fit. 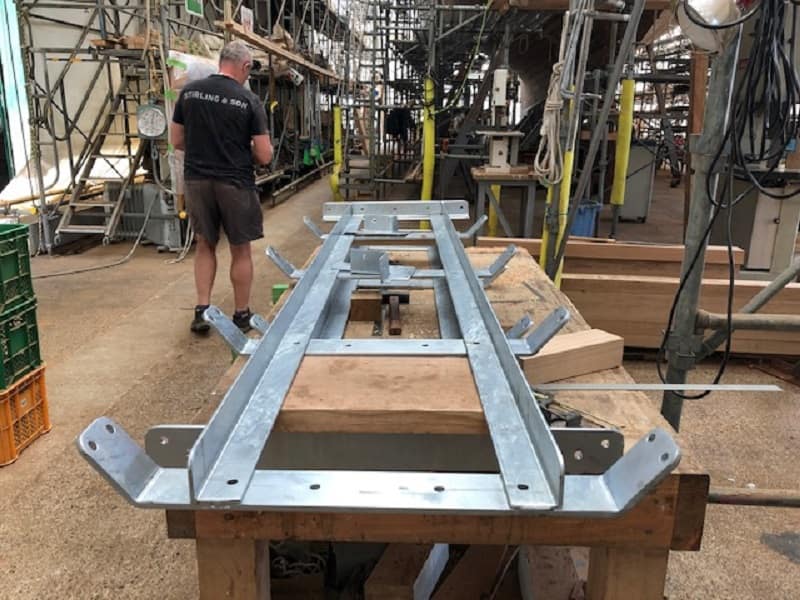 This steel frame will be bolted over the ballast to keep it in place. The tanks fit on top.