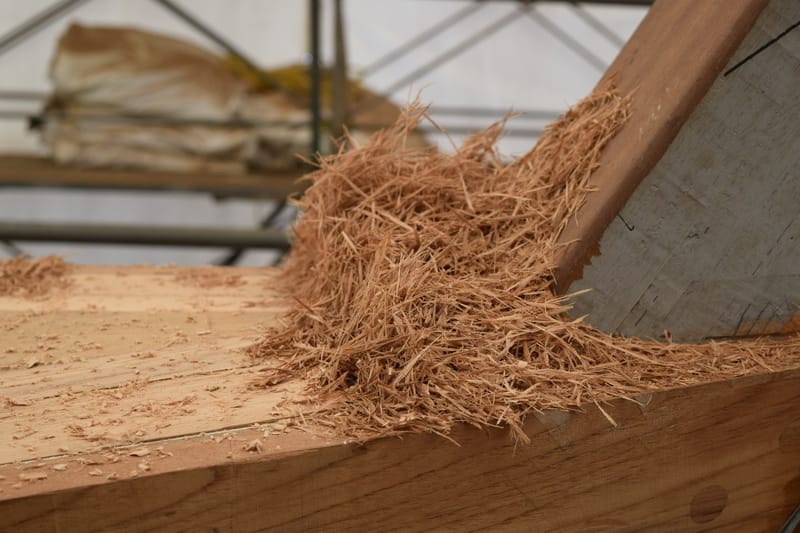 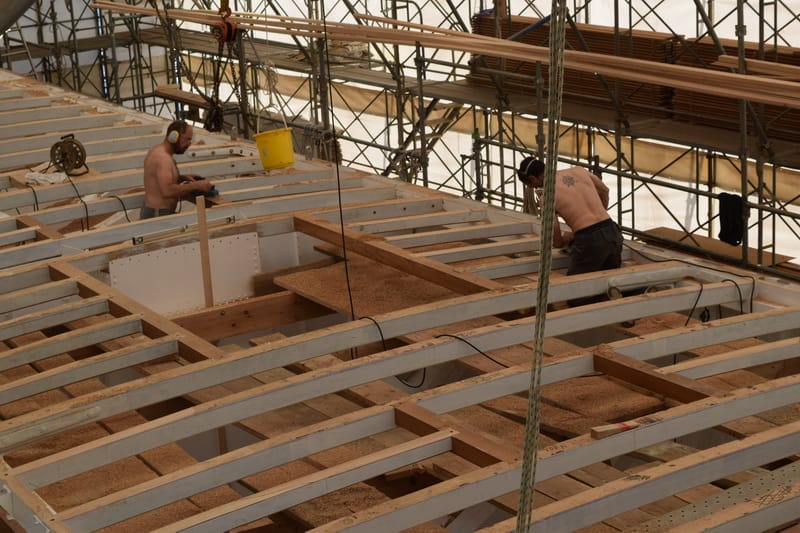 Richard and Lewis are fairing the beams to make sure they are all level with each other and follow the curve of the deck as they should. The dust was flying, so everyone was wearing masks today.

We discussed the upcoming schedule for the installation of generators, tanks, and lead ballast that have to be handled by crane, and decided to install them on Tuesday, June 4 instead of May 28. We’ve just been informed that the steering gear, windlass, and portholes have arrived at the port of Tokyo, and customs clearance will begin tomorrow. 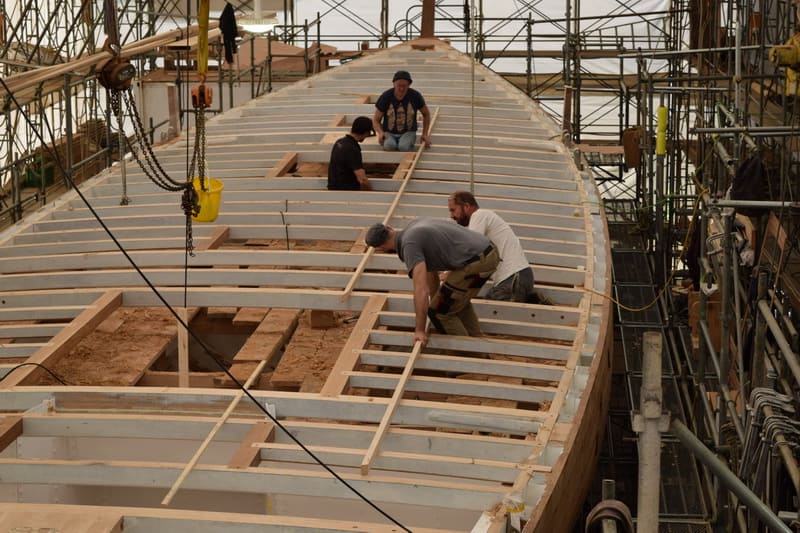 The deck beam fairing was largely completed yesterday, but some fine tuning was being done today. Paul and Lewis were pleased that the curvature of the beam after the fairing matched the blueprint perfectly. 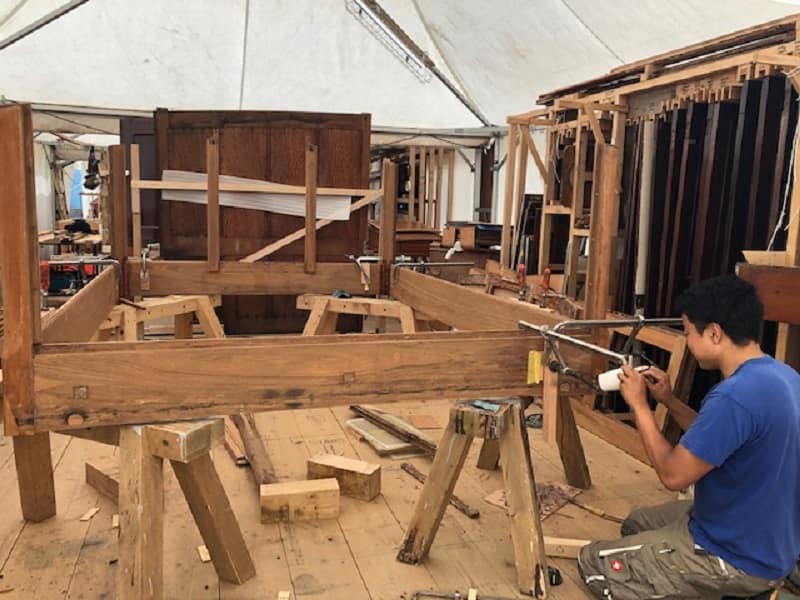 Most of the activity is on board, but Hashimoto is still working on the main deckhouse in the interior restoration tent next door. 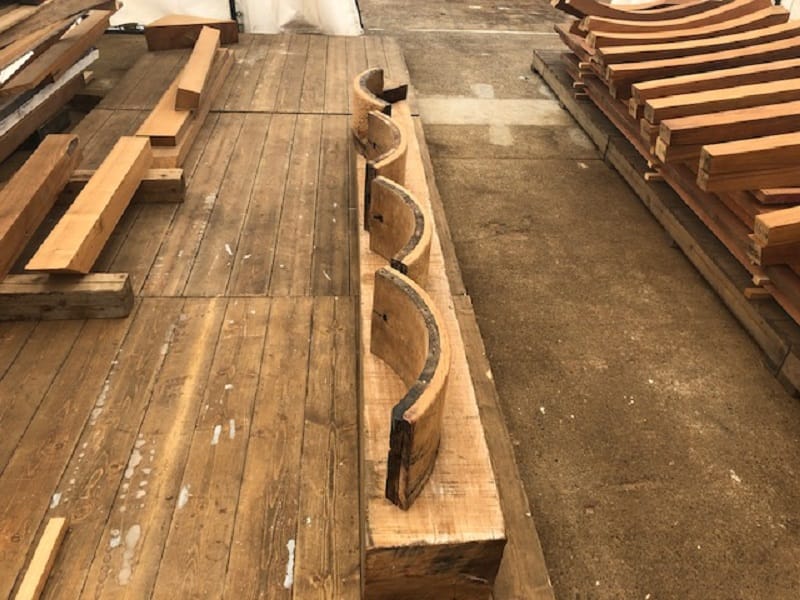 These are the parts of the old circular sail locker hatch that we bought teak for the other day. 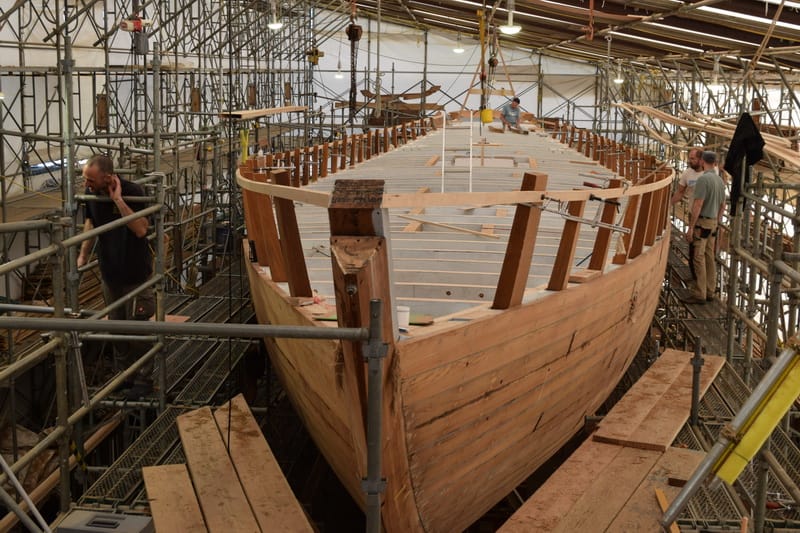 The stanchions are in and a baton has been stretched around the tops to check if they’re all in line with each other and follow the curve. 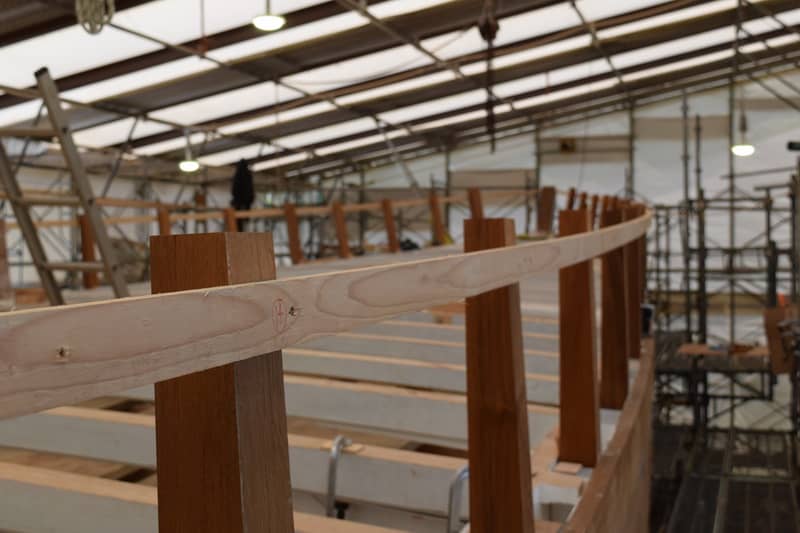 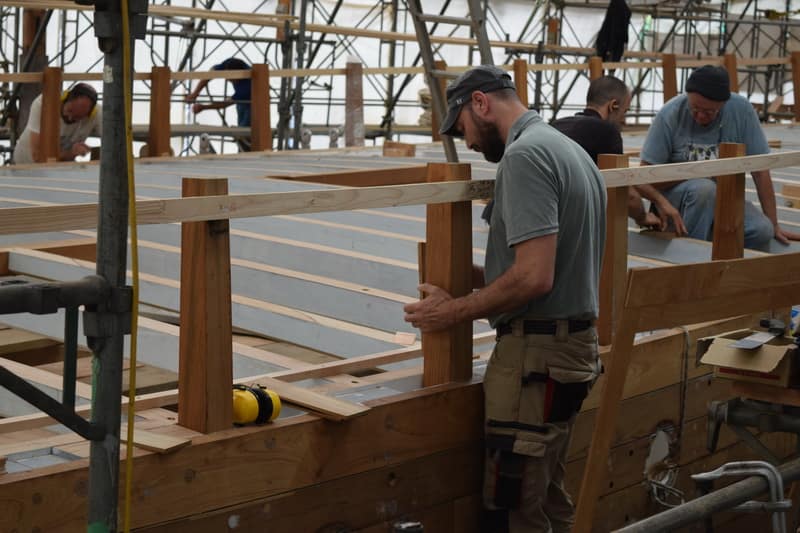 Lewis and Nico are working on the stanchions. Richard and Michael are in the background, setting out the deck in preparation for the installation of the subdeck. 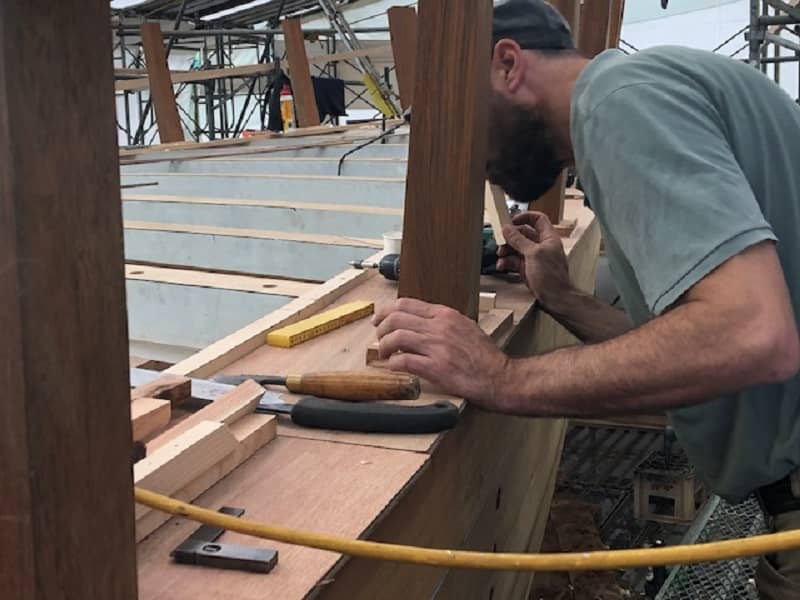 Nico and Lewis are making a pattern for the coverboard, the wide plank that runs around the perimeter of the deck. We need a form because the coverboard is curved and needs to fit closely around the stanchions. So we use plywood to find the curve and cut holes to fit the stanchions through. The pieces of wood (below) are glued around the base to show their true position before the plywood is removed and used for precise measurement of the coverboard. 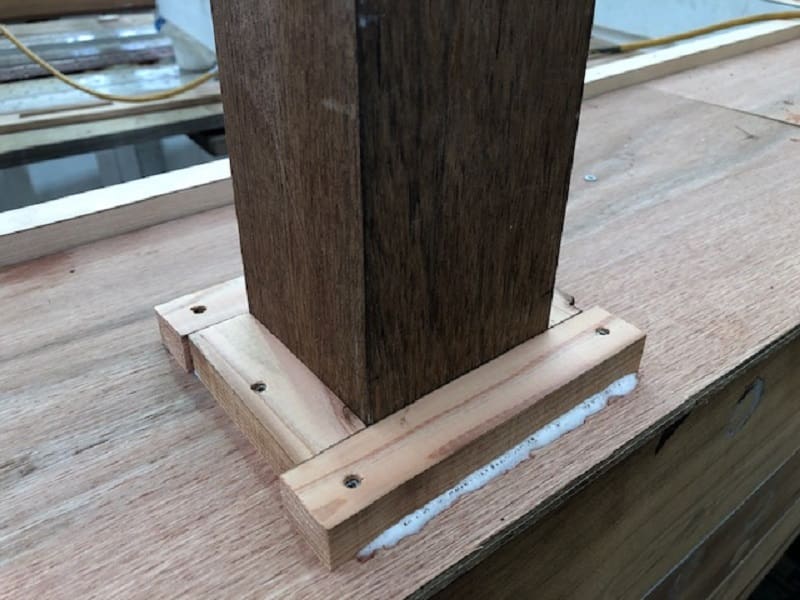 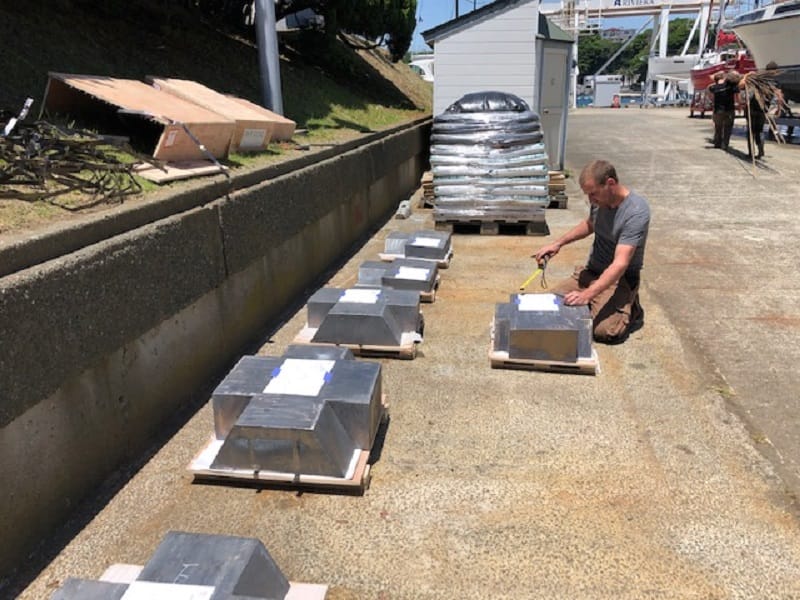 The interior lead ballast pieces that were cast to fit the bottom of the bilge have arrived, and Ben checked to make sure they all matched the forms. 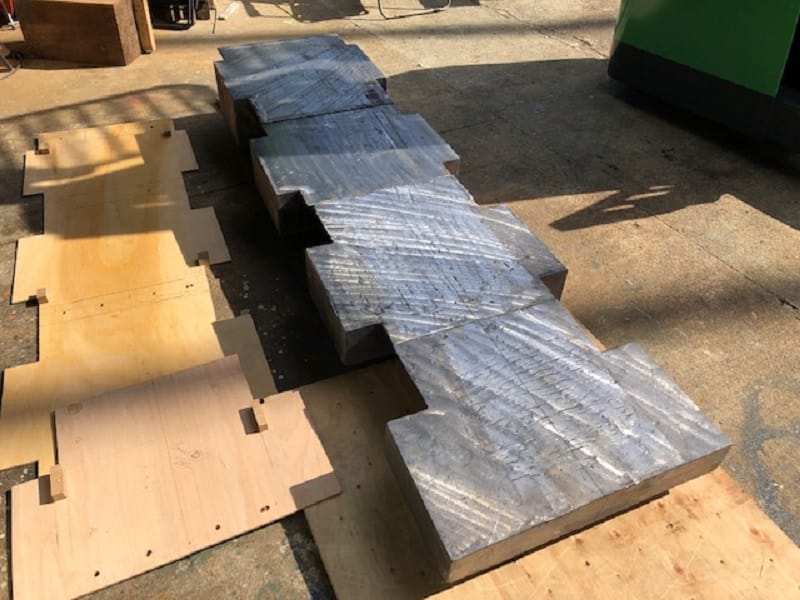 There are seven pieces in all, with a gross tonnage of 3.3 tons. They will be installed under the tanks. 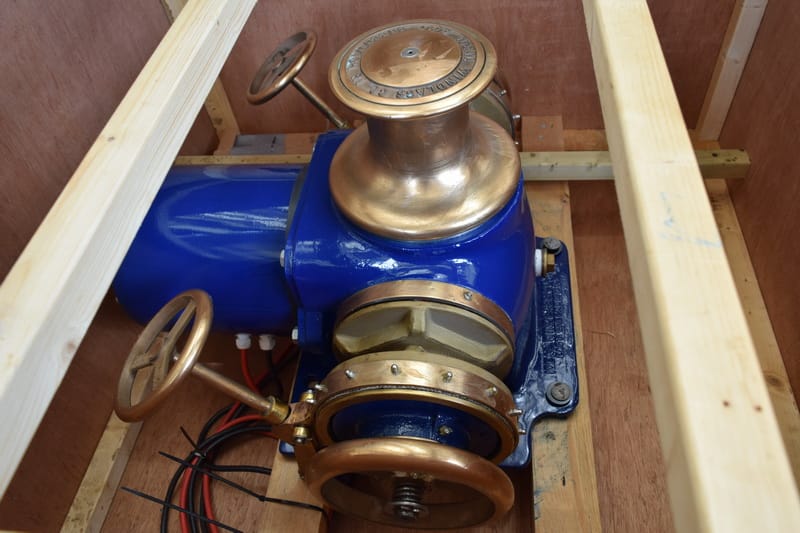 More restored hardware has arrived. The U.S.-made windlass dates from the seventies, after Cynara arrived in Japan. 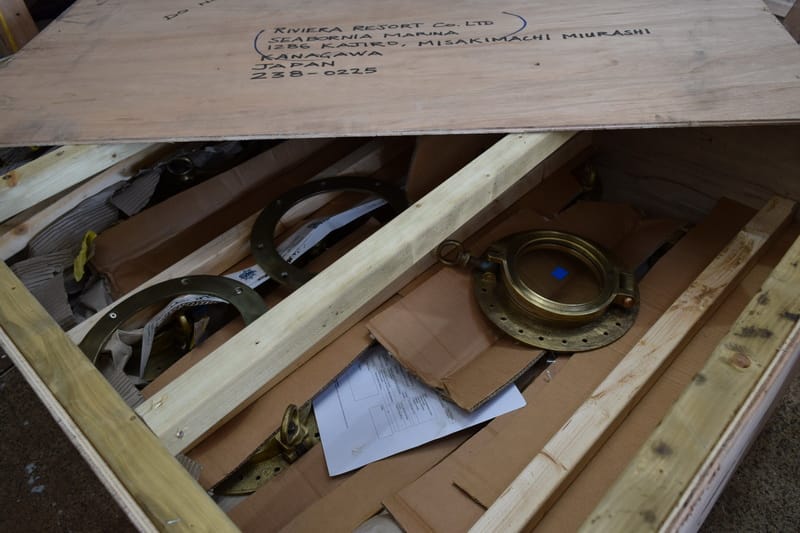 The restored portholes date from the original construction. 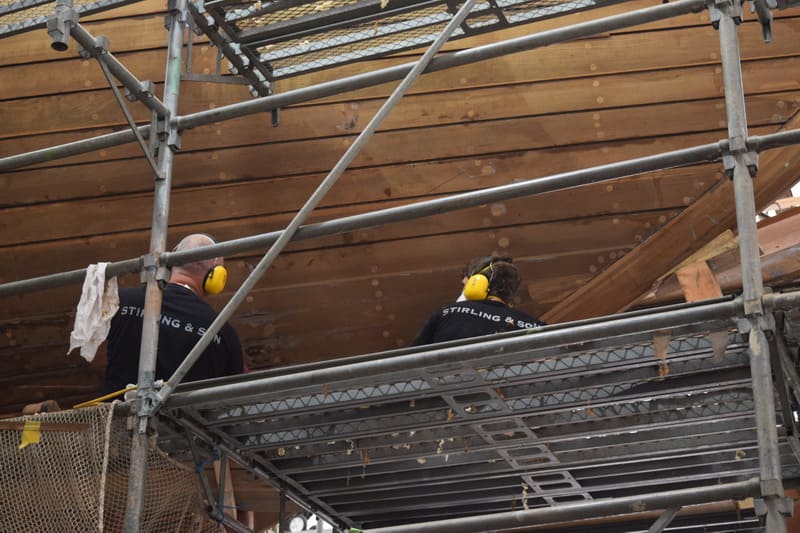 Meanwhile, Ian and Leo are working on the hull caulking.