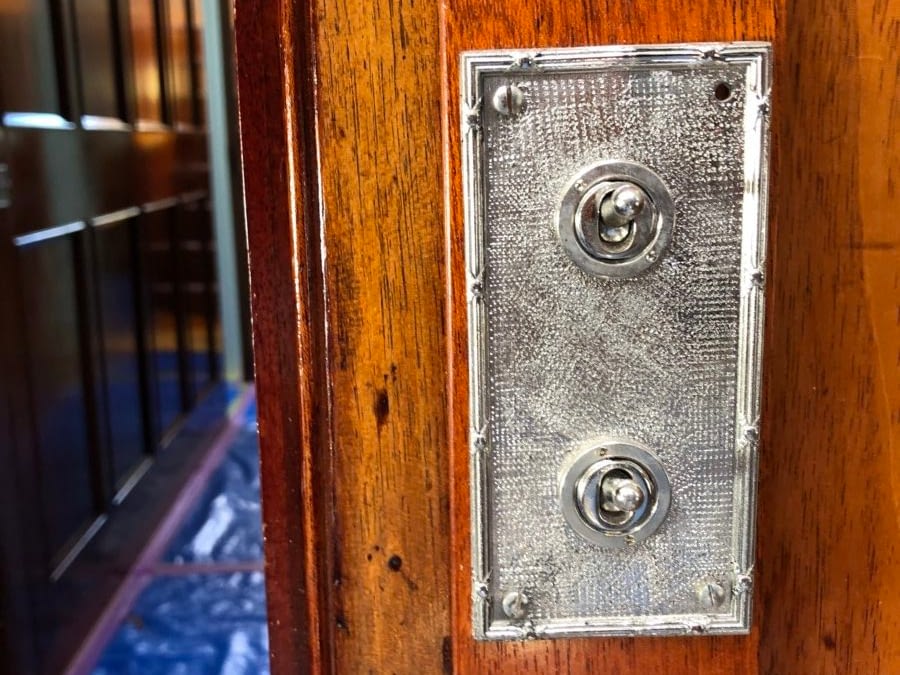 The nickel-plated light switches have been restored and temporarily installed so that the lights can be used during work hours. When everything is done, they’ll be fitted with the correct nickel-plated screws that are less obtrusive. 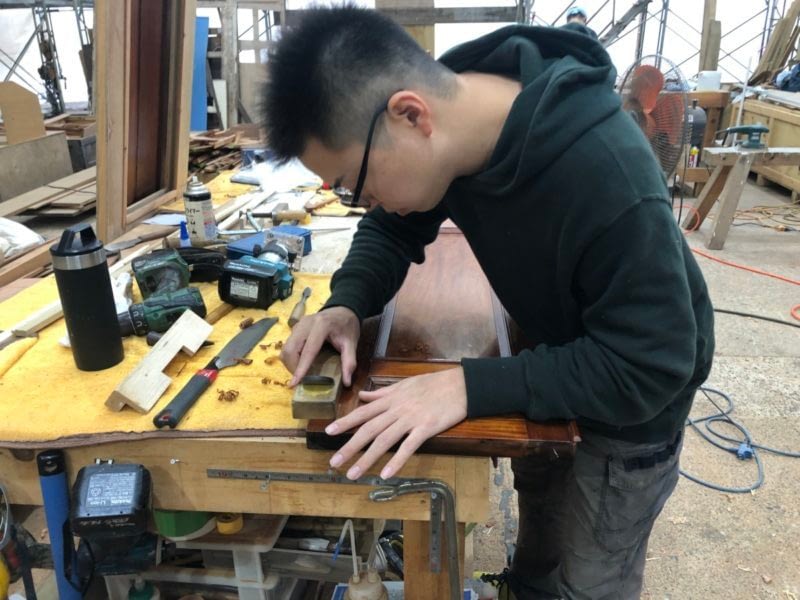 Tatsumi (above) attaches a hinge to one of the original locker doors, for the hanging locker in the owner’s cabin. The decorative holes are there to allow ventilation inside the locker (below). After attaching the hinge, he hung it in the cabin (bottom). 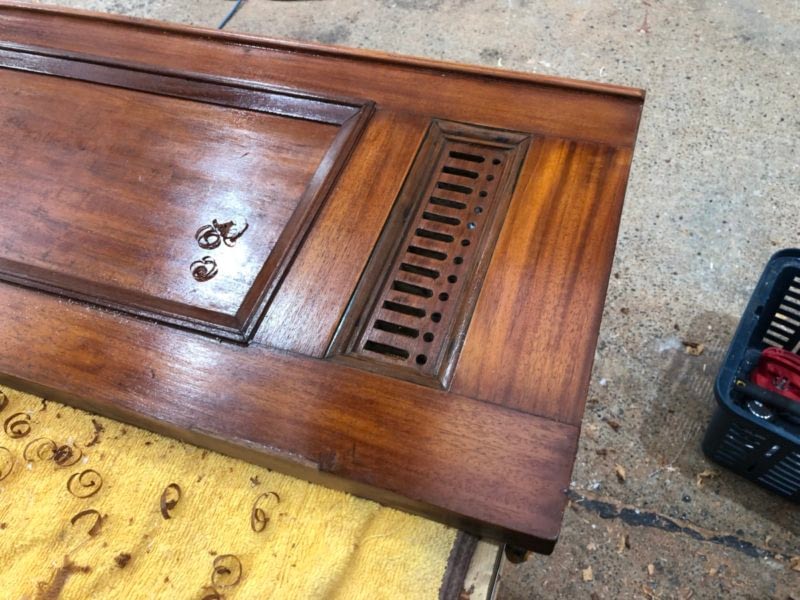 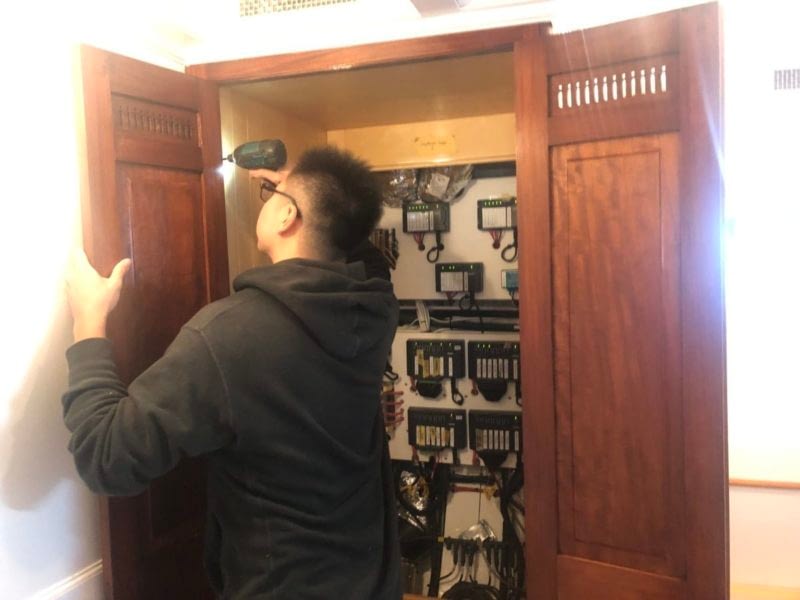 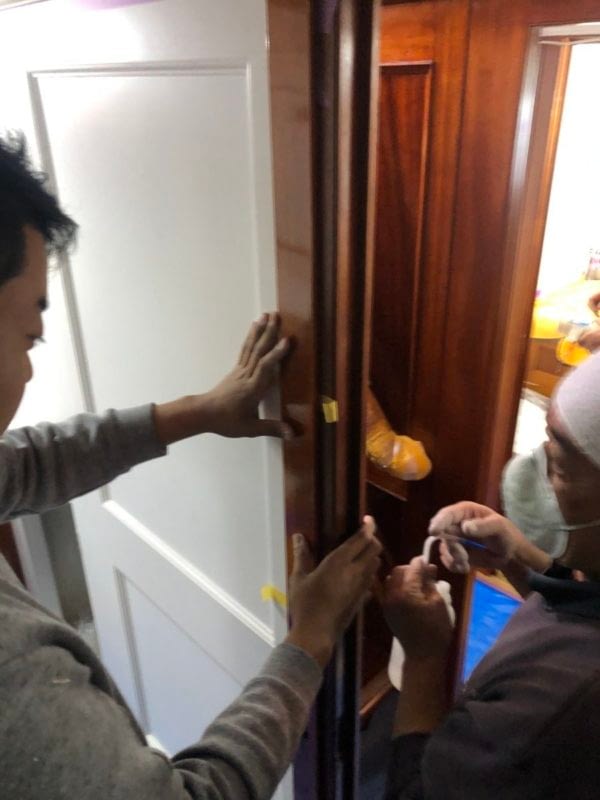 Hashimoto is installing the columns on the cabin side of the door frames and fitting light switches with the wiring hidden in the columns. 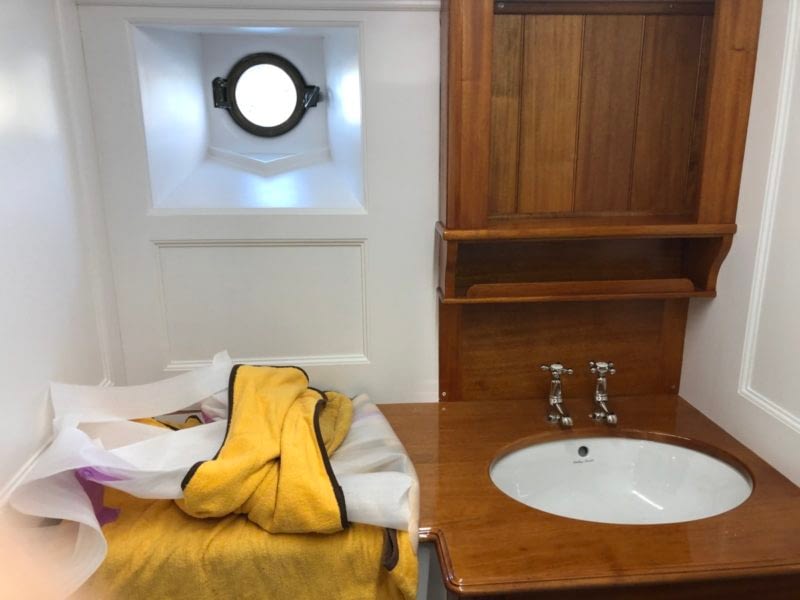 Paul has been building the washroom vanity units (above) and installing the shower hardware and trays (below), as well as making and fitting the pattresses for the light fixtures (bottom) and moldings that cover the wiring, and fitting the nickel-plated mesh to the air conditioning vents and bilge vent frames. 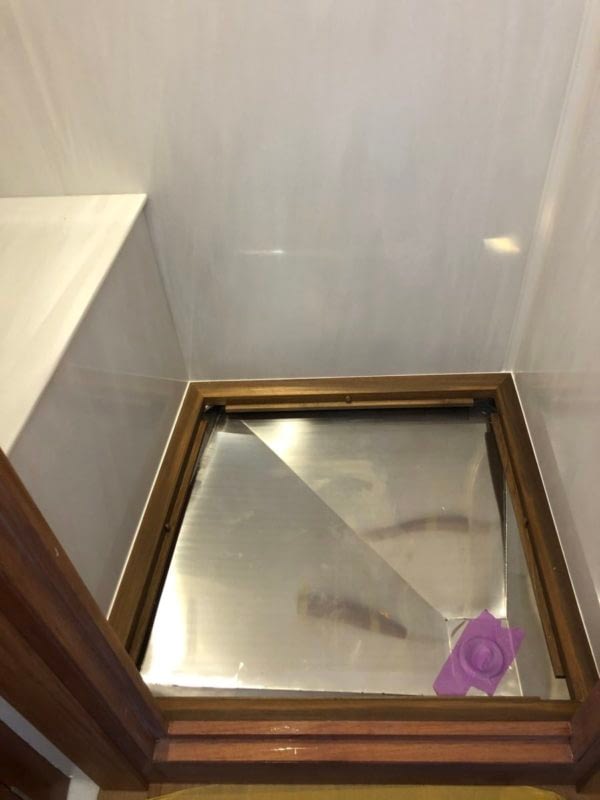 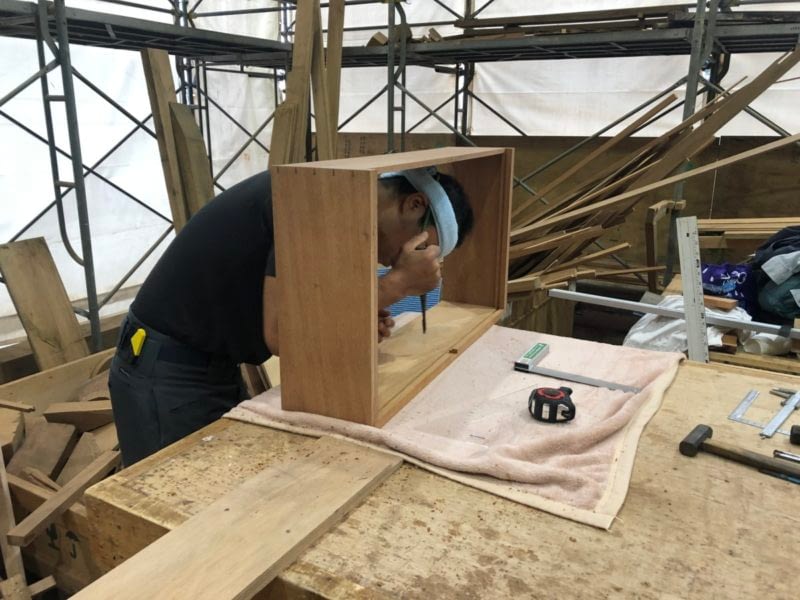 Kawashima is fitting the handles on the new drawers made for the aft guest cabins. 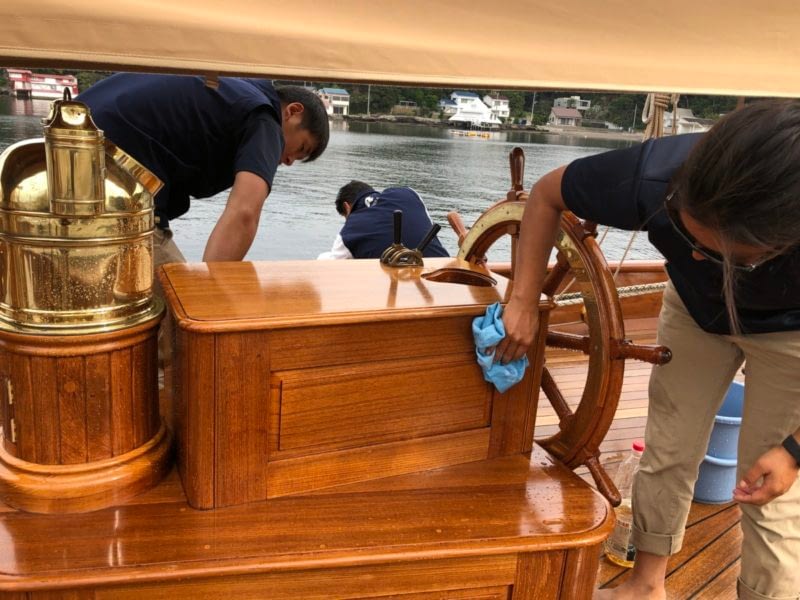 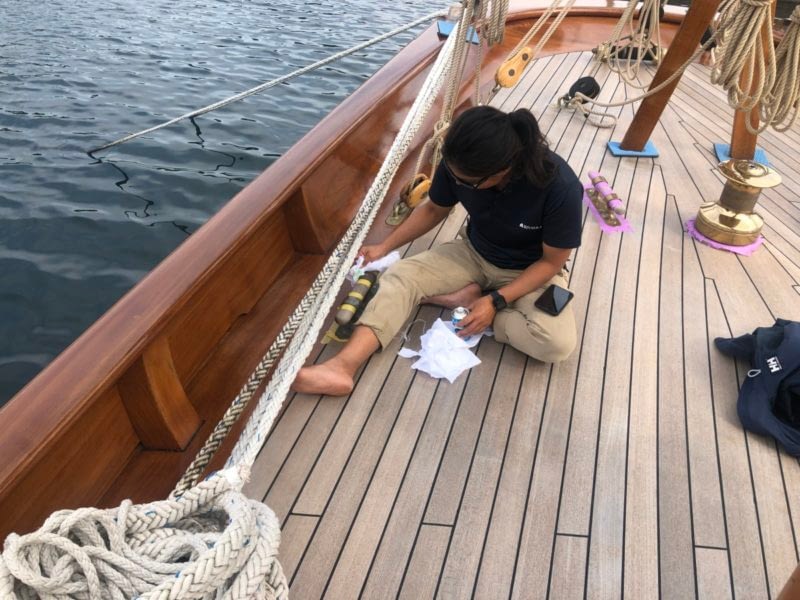 Members of the crew came to polish and prepare Cynara for a day of sailing. 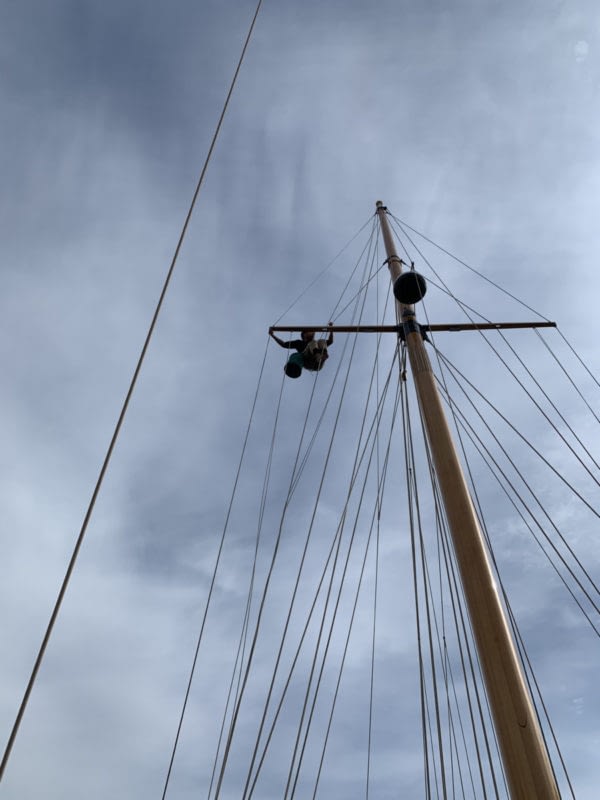 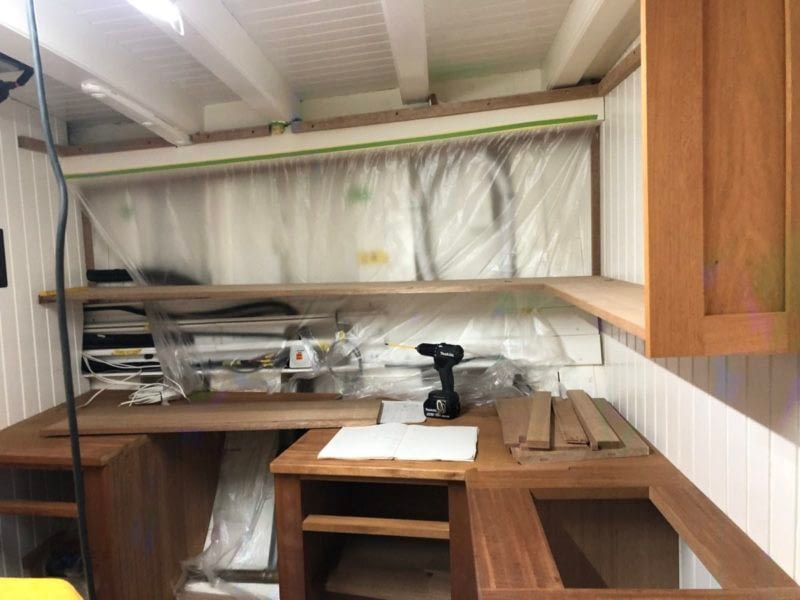 Work has started on the galley (above and below). 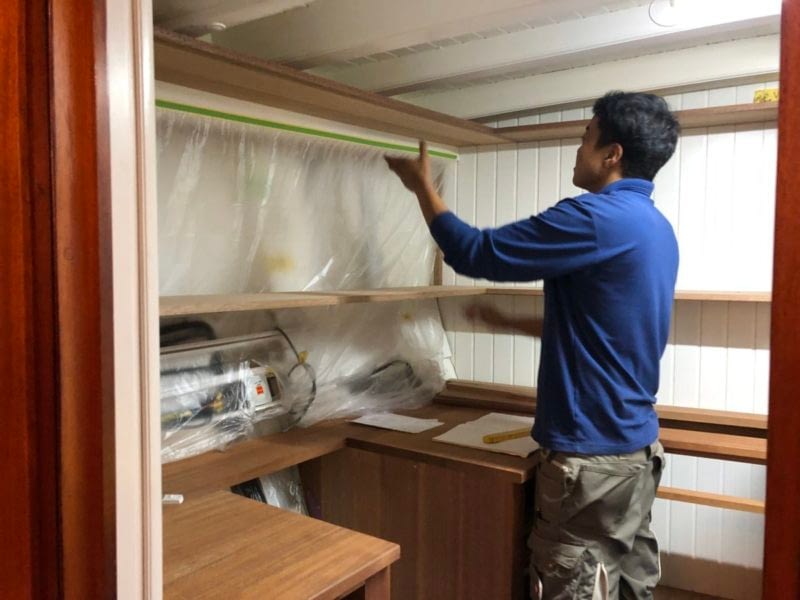 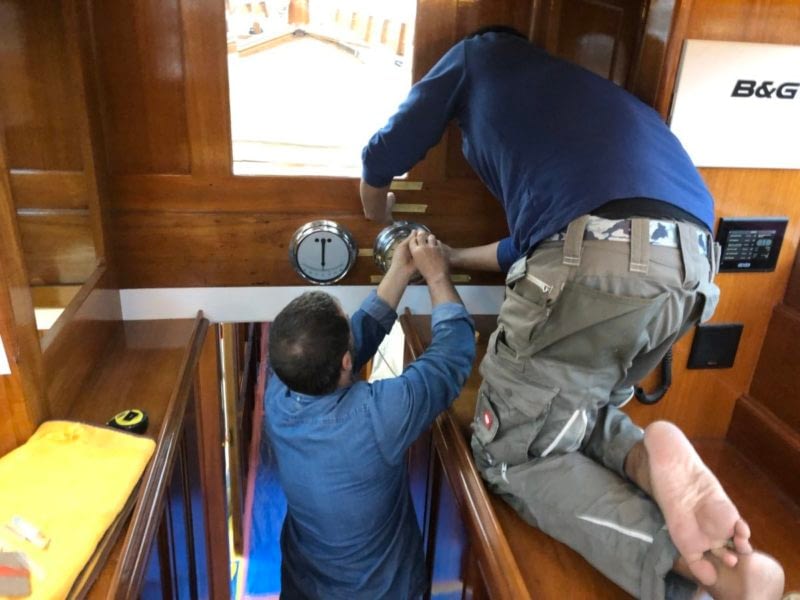 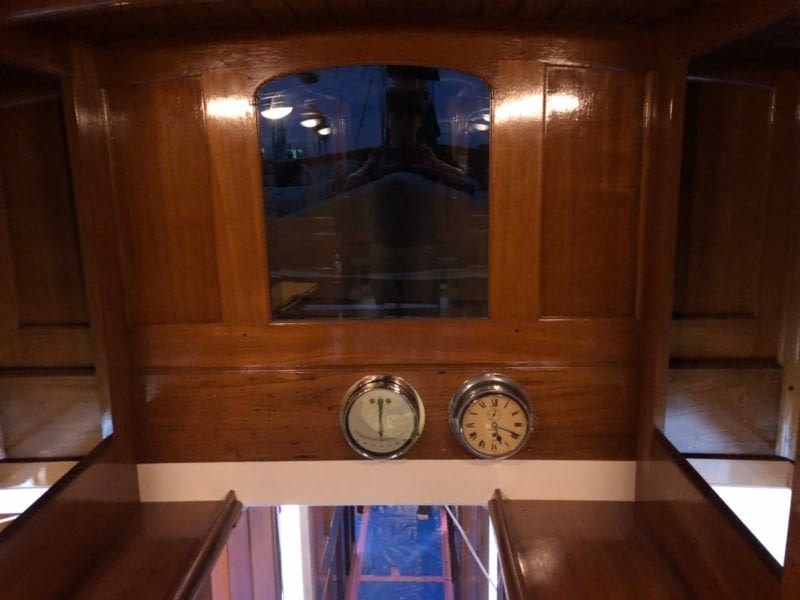 Two of the period instruments have been mounted facing aft at the forward end of the deckhouse. The one on the left is an inclinometer, which indicates the angle of the heel—how much the ship is leaning to port or starboard. It was on Cynara when we dismantled her, and though we don’t know if it dates back to the launch, it is fairly old. On the right is a ship’s clock dating from 1911.

The space on the left is for the barometer, which is currently being restored and will be fitted soon. Like the inclinometer, we don’t know it exact origins. 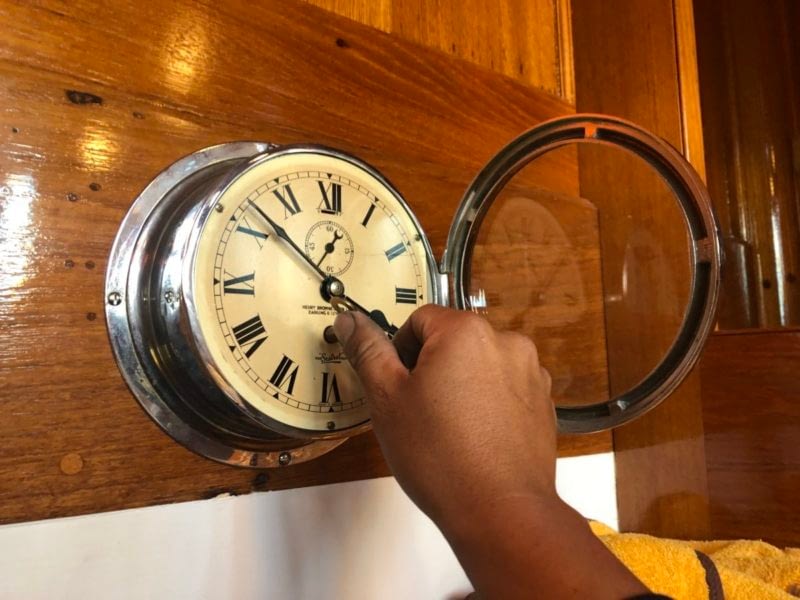 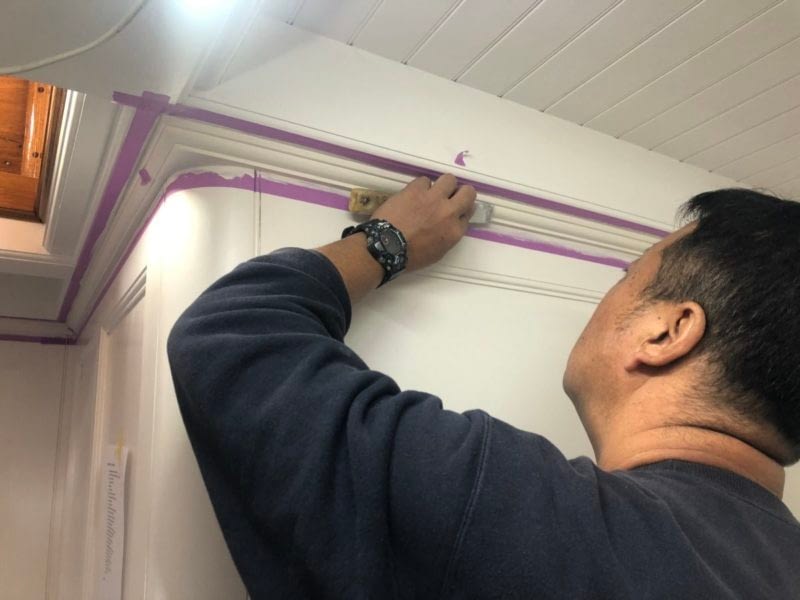 Wada is concentrating on finishing some of the cabin details, such as the molding that runs around the top of the cabin bulkheads. 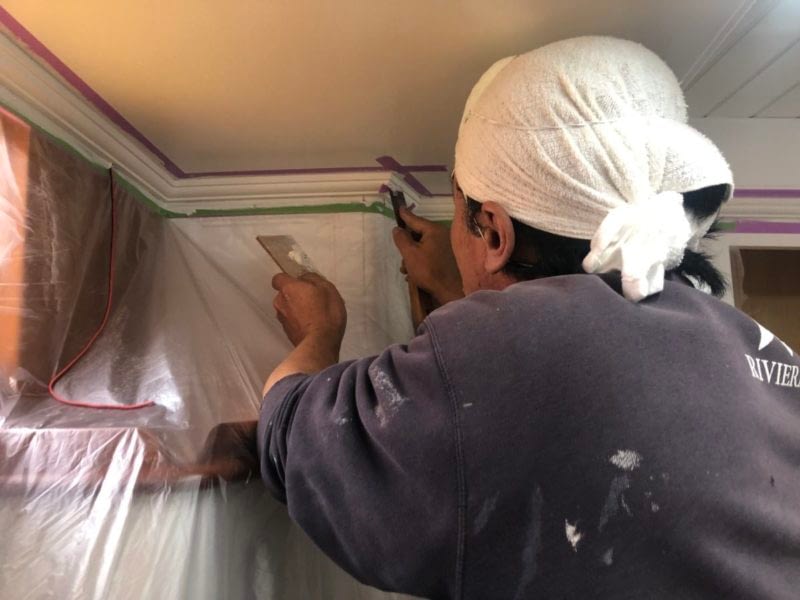 The molding is not easy to paint, as there are many difficult to reach areas. 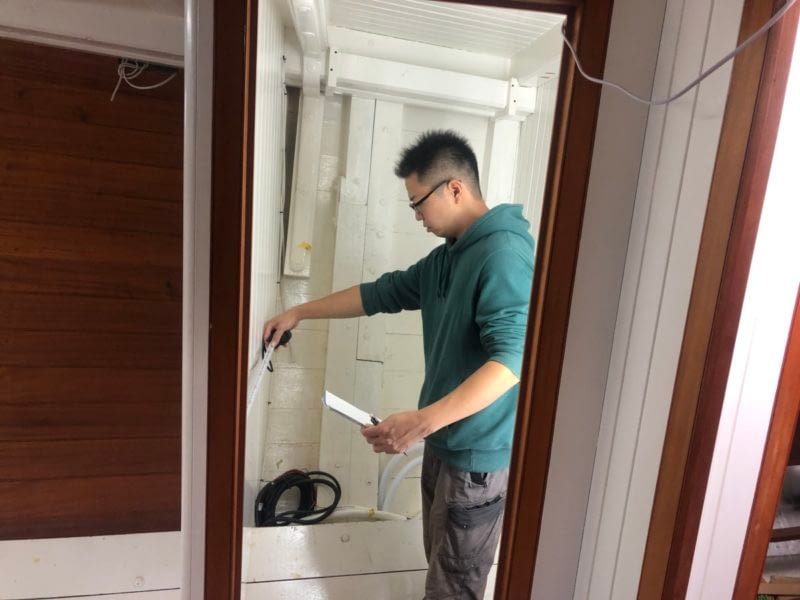 Tatsumi began measuring and planning the frames for the washstand and lockers in the crew area. 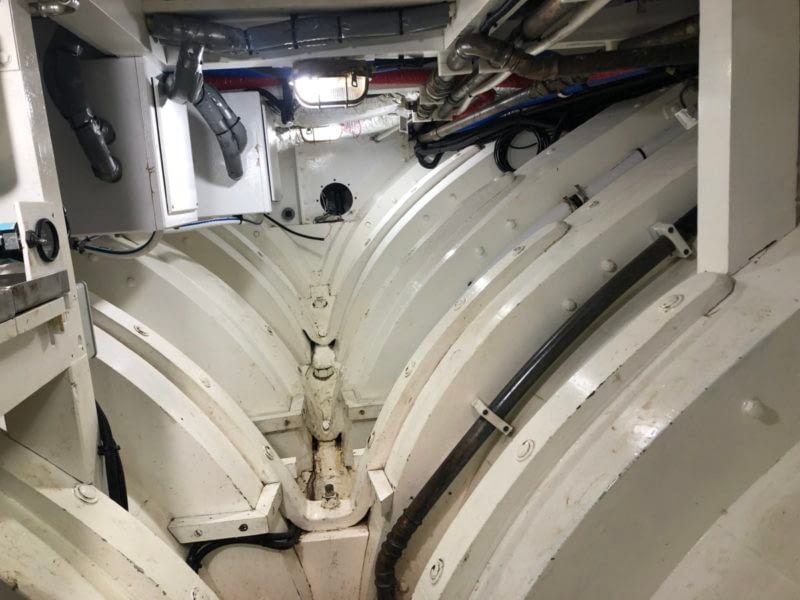 Sawdust and shavings from the work above can block the pumps, so the bilge must be kept clean while the work continues. 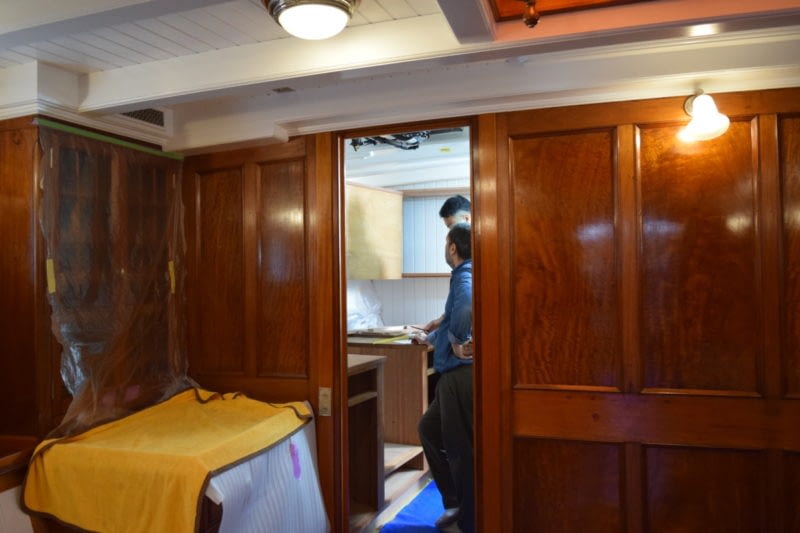 Hashimoto and Paul are discussing the access for the electricity and plumbing in the galley. 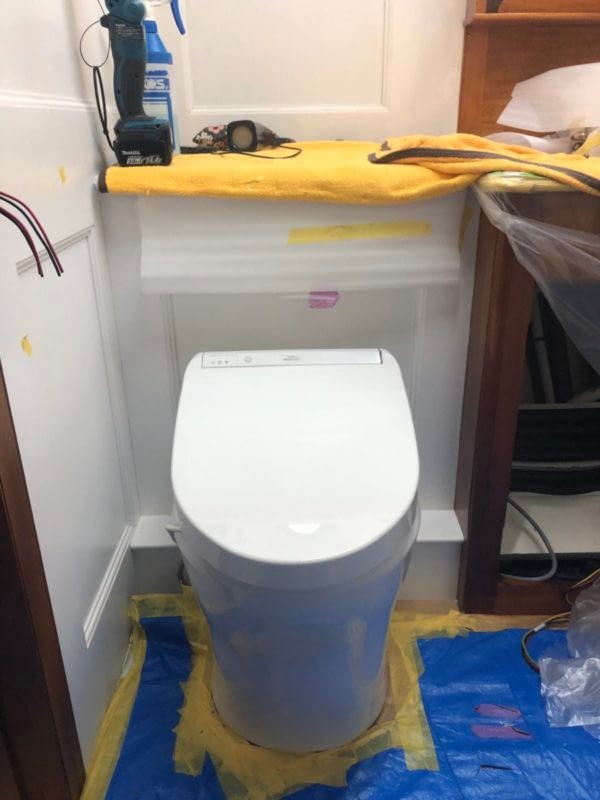 Pascal has finished installing three of the toilets—there’s one more in the crew quarters—and as well as the necessary plumbing. The job was a complex one, consisting of two systems so that the ship meets both Japanese and European requirements. 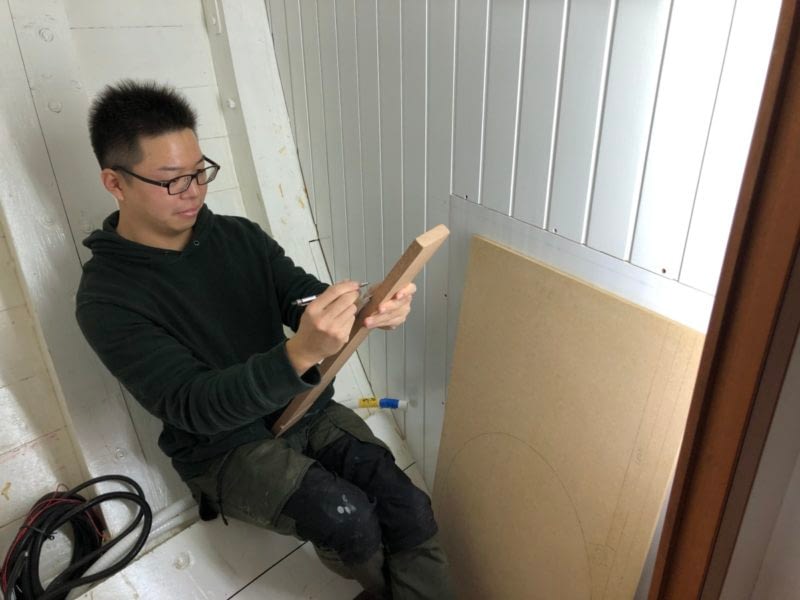 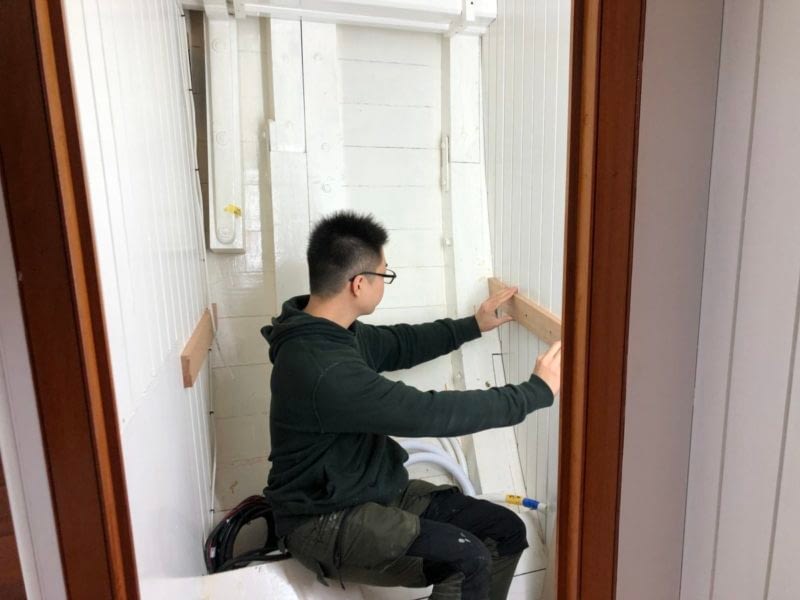 Tatsumi continues to work on the crew’s shower room. It’s compact, but will accommodate a sink, shower, toilet, and room for storage. 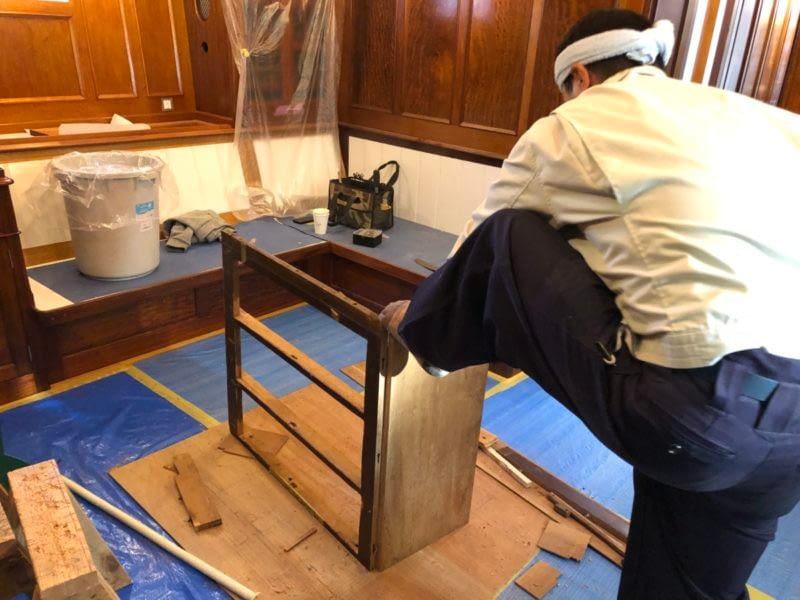 Kawashima has finished making the drawers and is now working on the desk for the captain’s quarters. 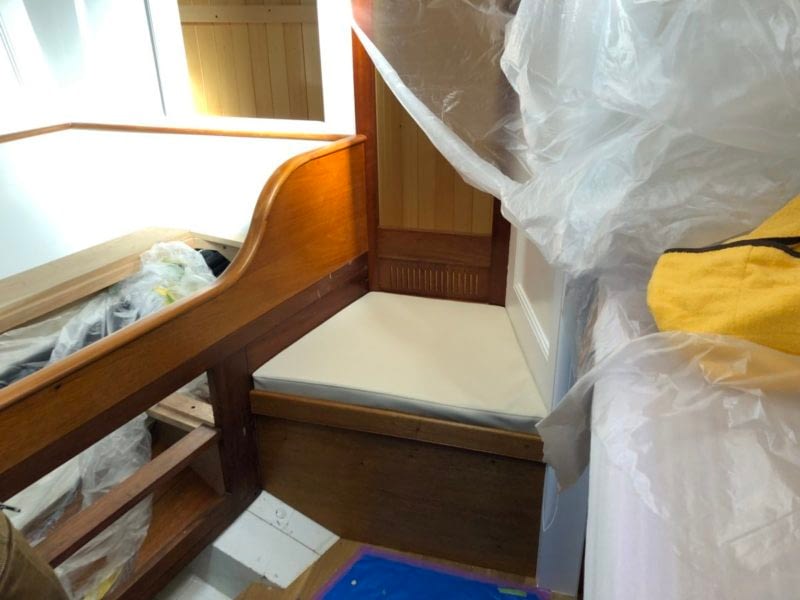 The cushions for the seats in the aft guest cabins were delivered today. The cabins are looking more complete every day.