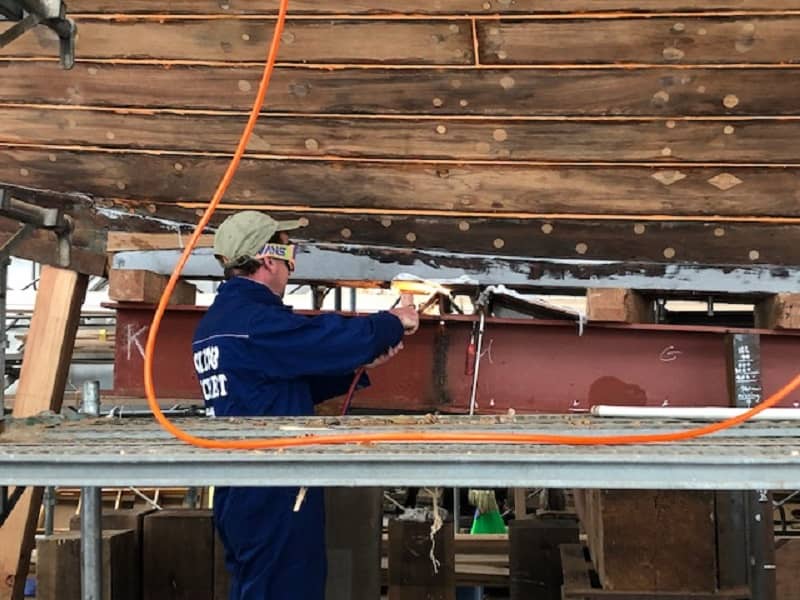 It is time to start preparing for reattaching the ballast to the keel. Above, some of the blocking that elevated the keel over the H-beam strong back is being removed to allow access to the underside of the keel. 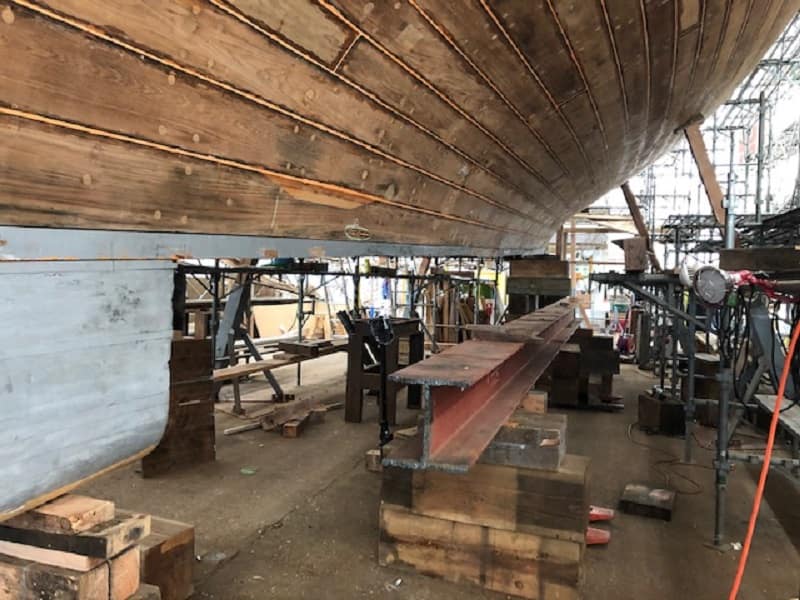 Paul, Daniel and Demetri removed the strongback from under the keel. It has been used to keep the keel straight and at the correct angle while we’ve been working on the planks and frames. We hope to install the ballast later this month. 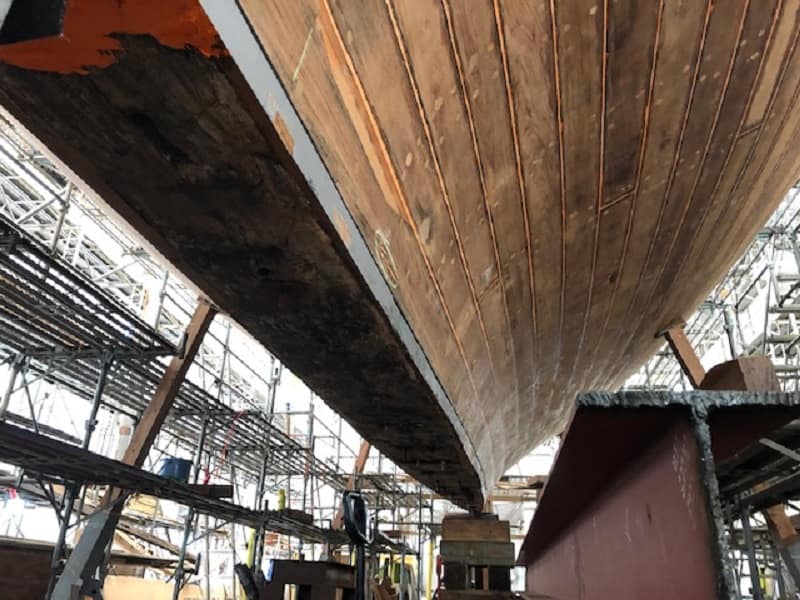 The keel is being supported with blocks while repairs to the underside of the keel are carried out. With the planks and frames in place, now the boat has enough strength to support itself to some degree. 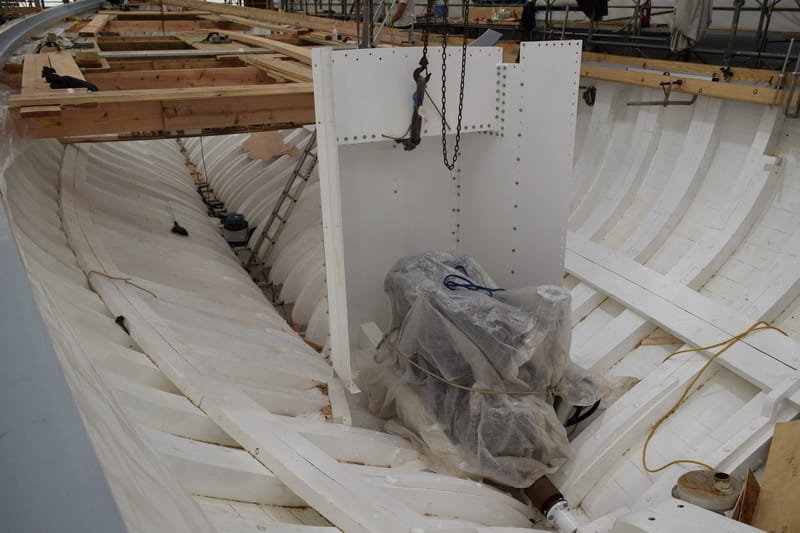 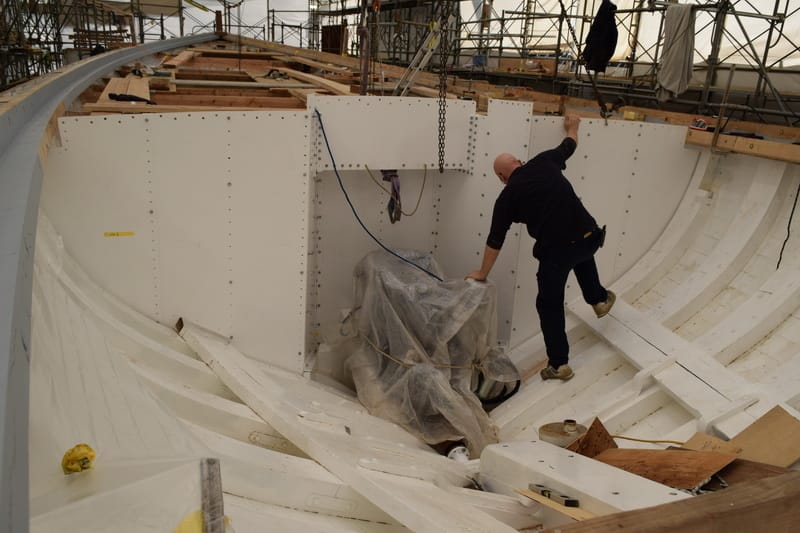 The bulkhead that goes in front of the engine was completed today by Sawamura Iron Works, and we tested to make sure it fits before we install it. 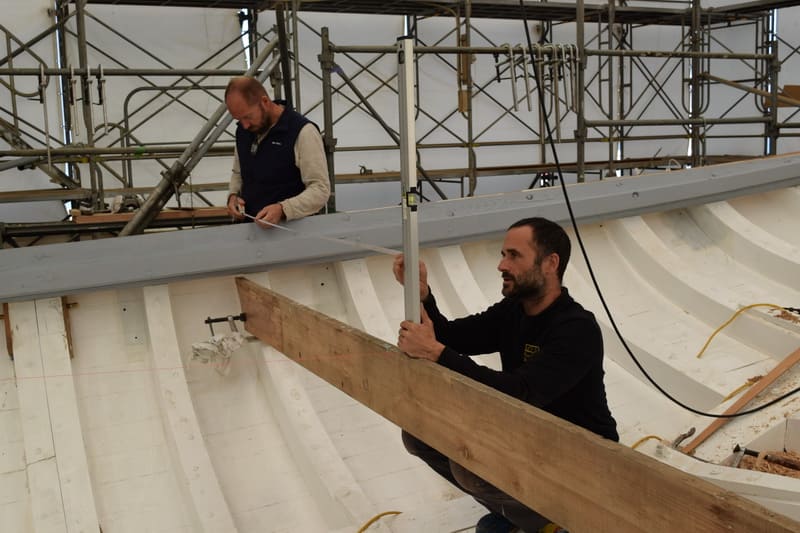 Richard and Lewis are using string and a spirit level to set out the deck beam positions. 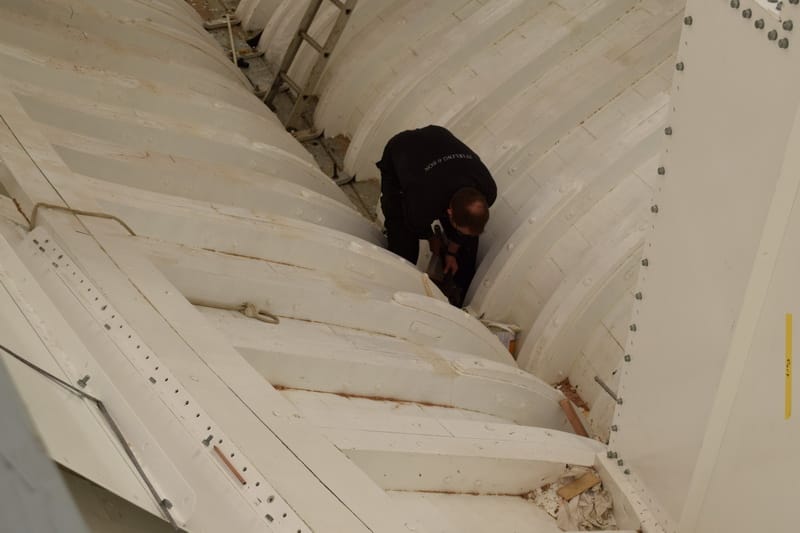 Daniel is tightening some of bolts that hold down the iron floors. These were inaccessible with the strongback blocking in place. 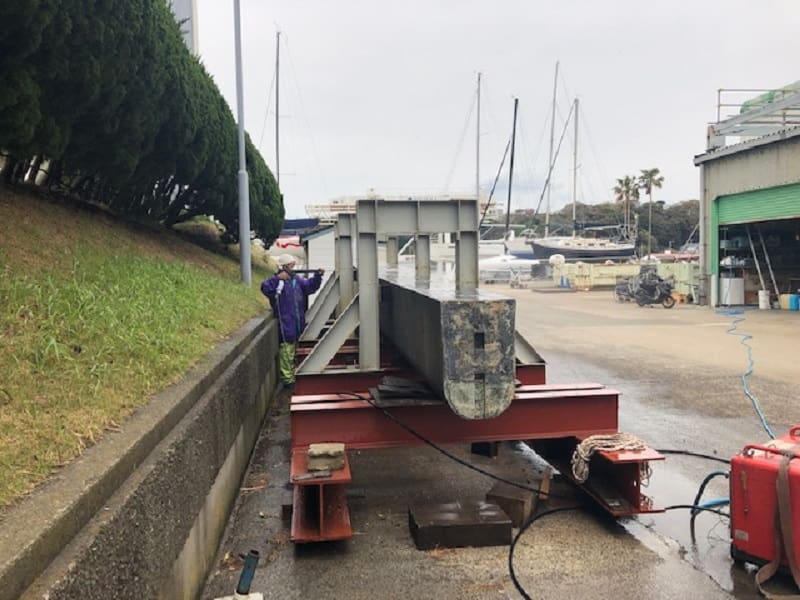 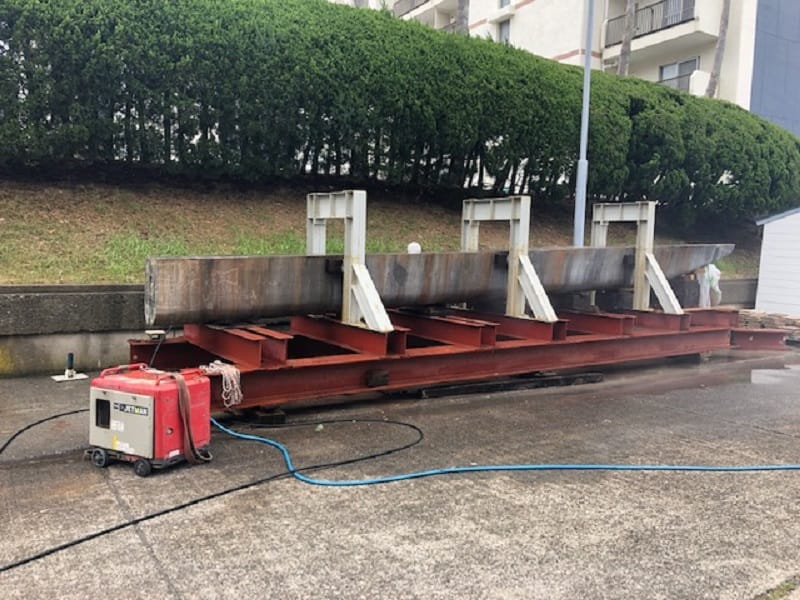 The lead ballast is being cleaned with a high-pressure washer today to remove accumulated dirt before being moved into the tent and fixed to the keel. 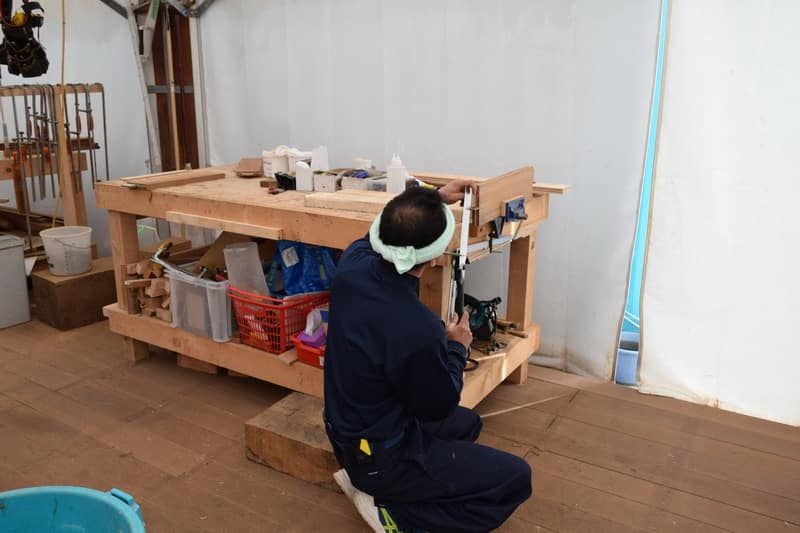 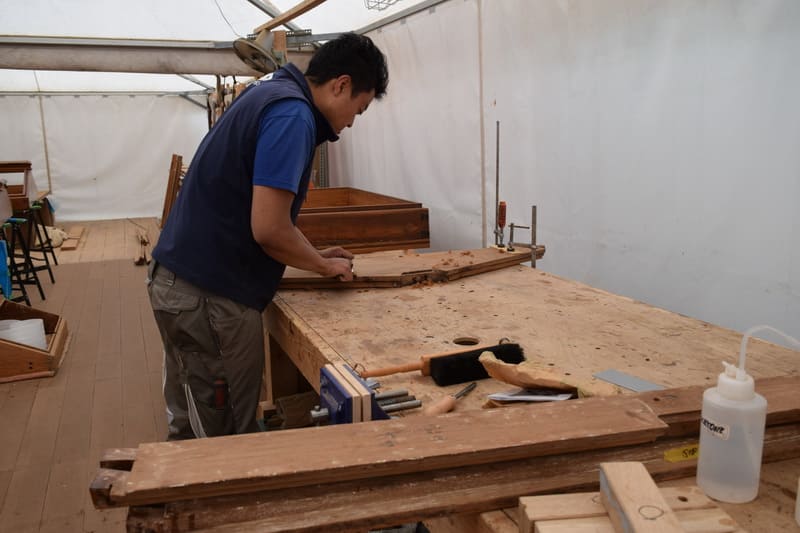 Kawashima and Hashimoto continue working on the various deck structures.

The deck caulking for the teak deck arrived today from the American company, Teak Decking Systems. We also discussed air conditioner pumps with our domestic supplier, Marine Elec, and calculated the flow rates for two compressors. 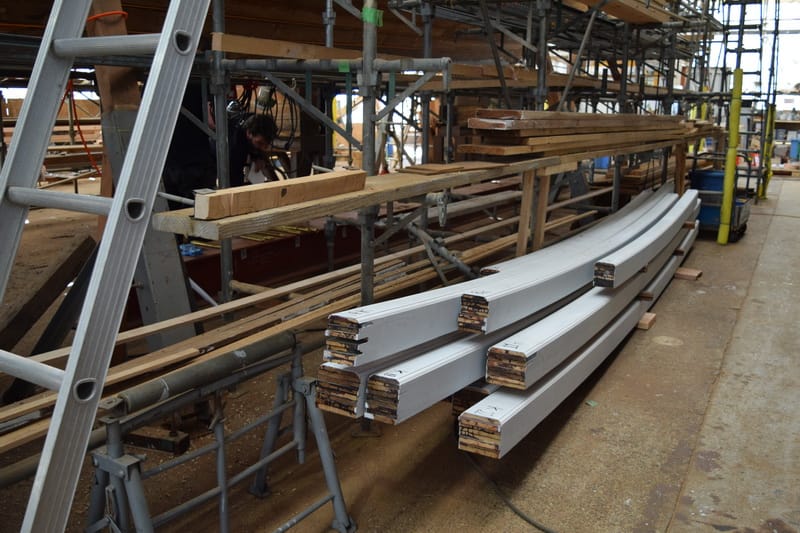 The deck beams have been placed near their final positions. 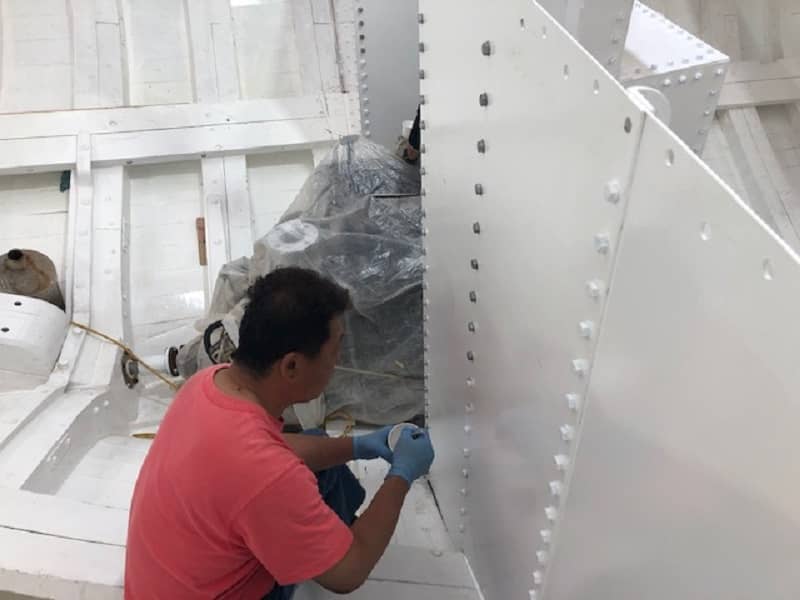 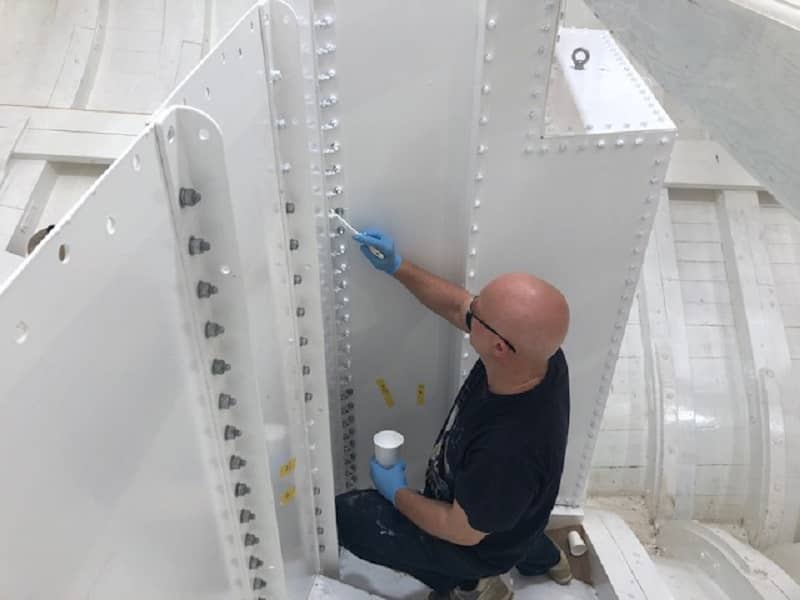 A Japanese team is working on painting the bolts of the engine compartment bulkhead.

This bulkhead is made of 9 parts, weighing over 300 kg in total.

Paul said he hoped to start moving the lead ballast into the tent by next Wednesday. 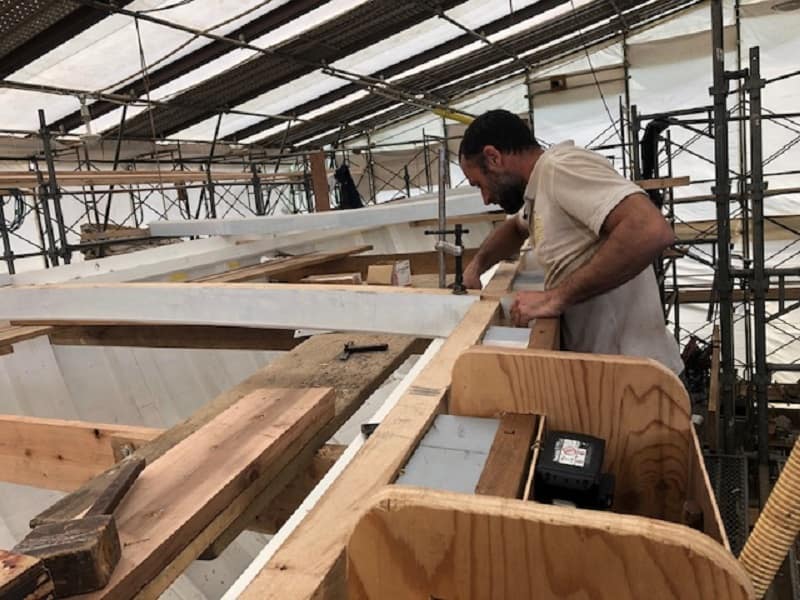 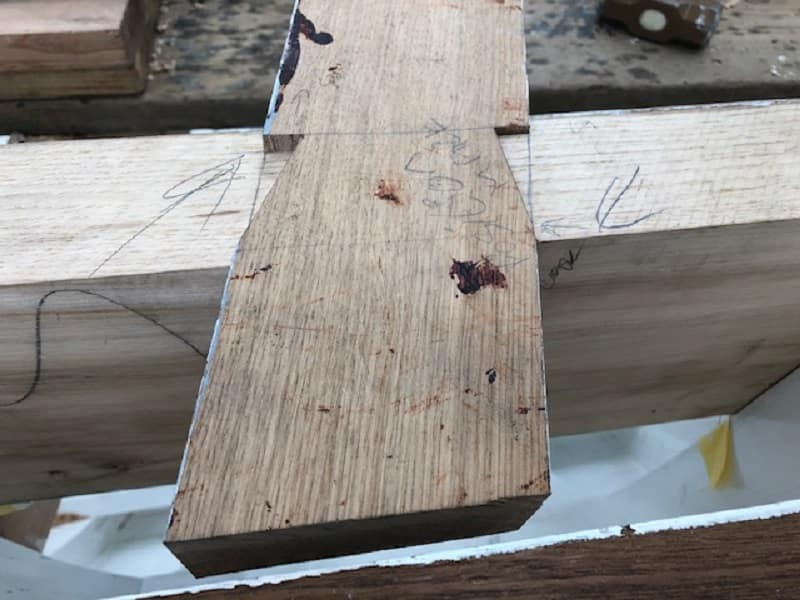 Today Lewis and Richard started to fit the beams starting from the near the bow, right on schedule. 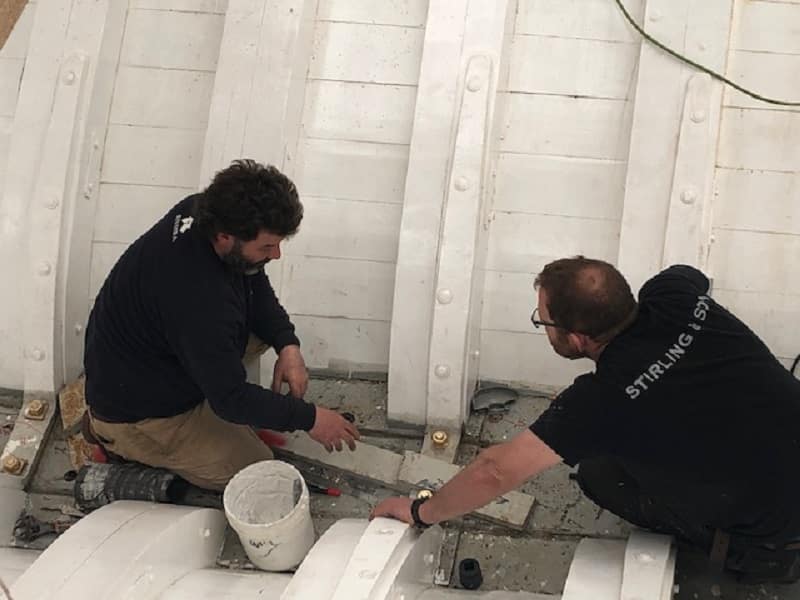 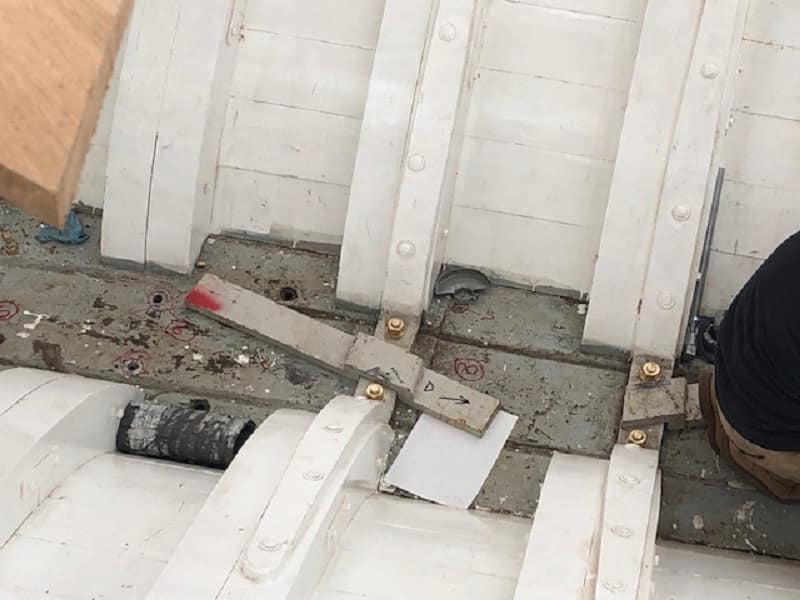 Paul and Daniel are preparing for the ballast installation scheduled for next week. Today the bottom of the ship was being cleaned, and the wrought iron clips inside the bottom of the ship are being mounted. By connecting the keel bolts with these large iron straps over the floor, the whole assembly is strengthened.

Above: This is what the frames looked like in October 2017, before everything was taken part. Everything is new except for the hull planking and the wooden keel. 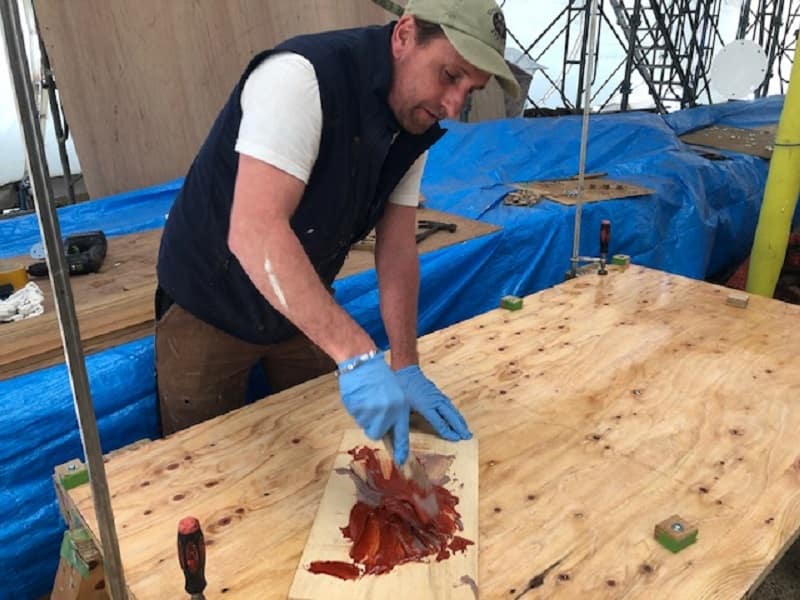 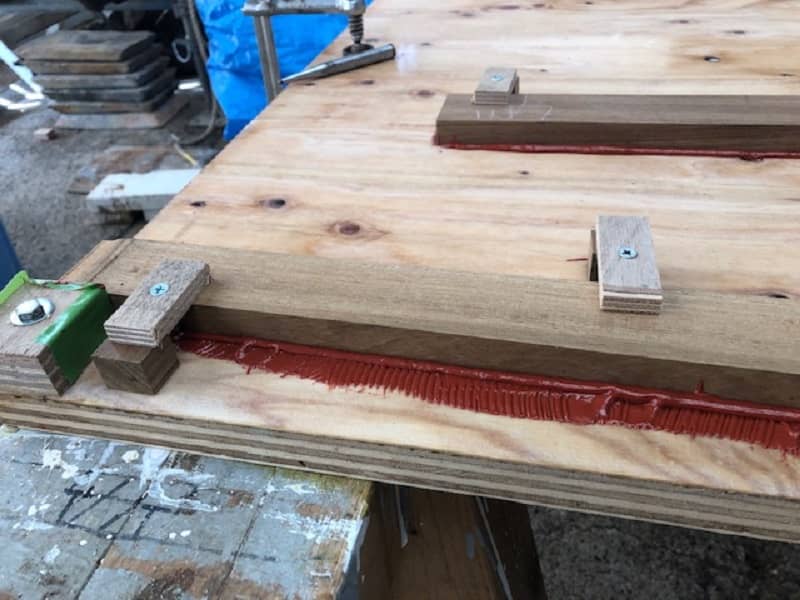 Ben did some trial work with the epoxy for the teak deck that arrived yesterday. He was working with a variety of shapes to examine the effectiveness of the adhesive. 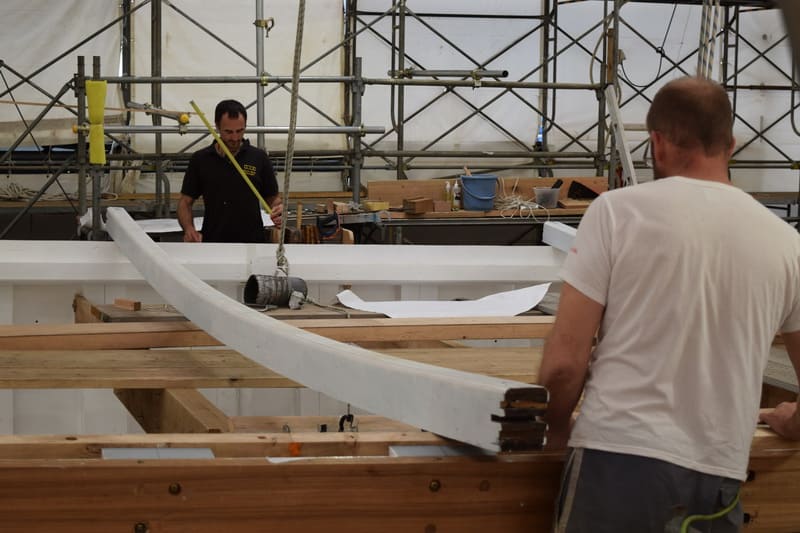 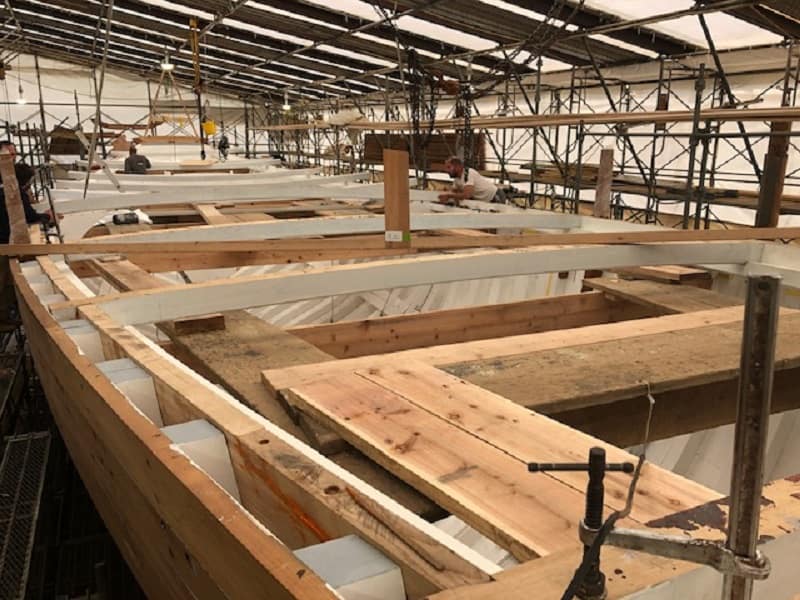 Lewis and Richard are continuing to install the beams. They are concentrating on the main beams first—beams that go around the masts or hatch openings, and those that can’t be moved from the drawn positions. Once they finish these, they can set out the other beams and fill in the gaps. 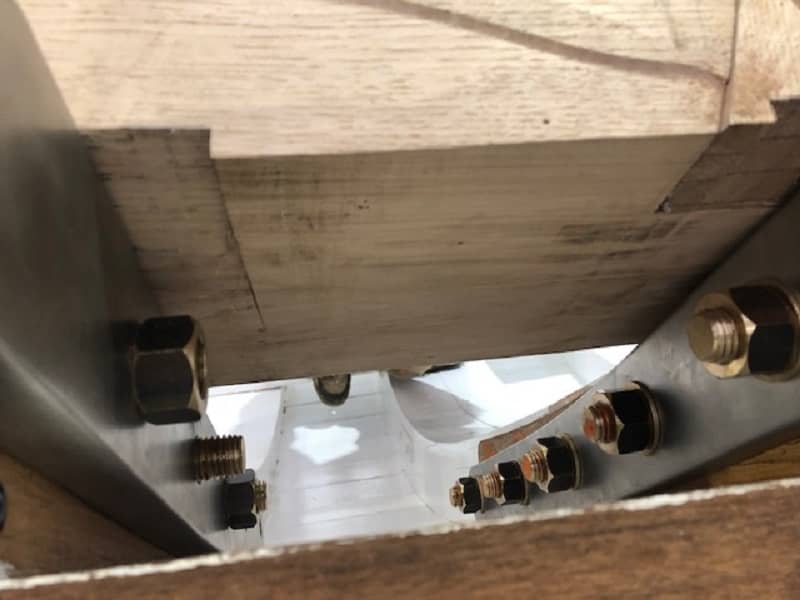 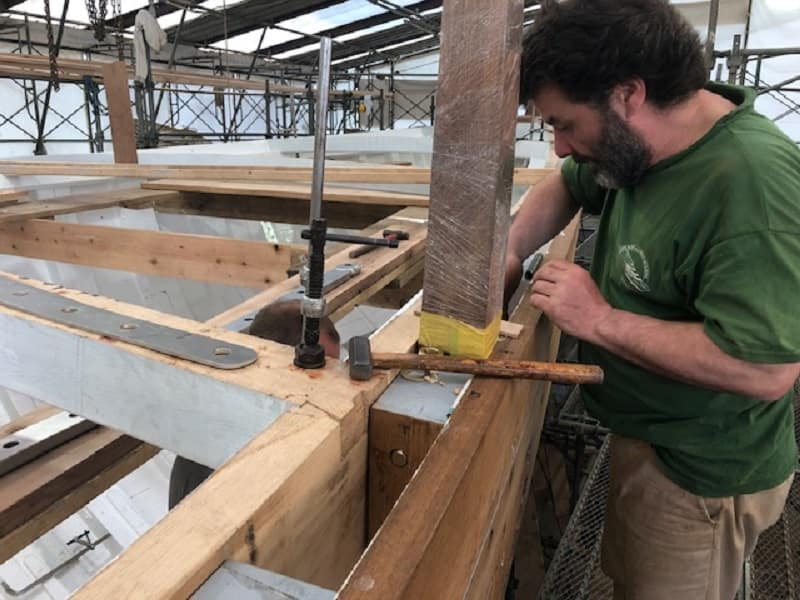 Paul and Graham are installing the chain plates for the wires that support the masts. Paul has been waiting for these to arrive, and when they came in, he started putting them in right away. 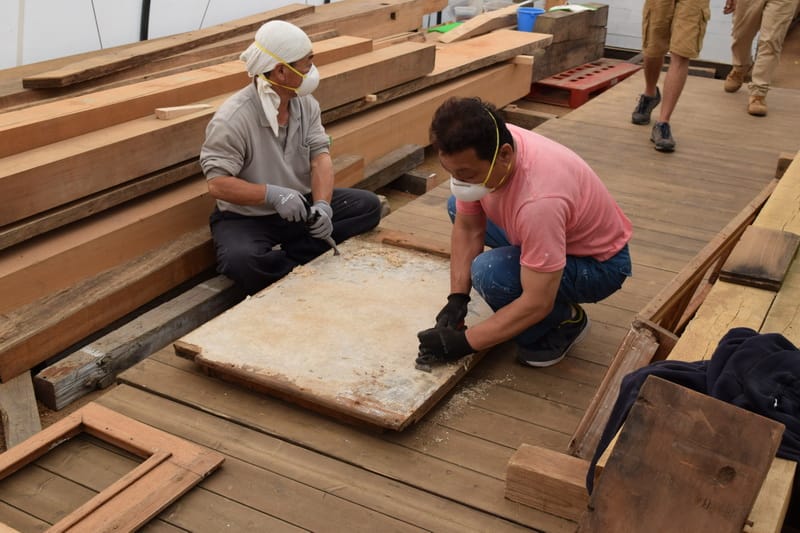 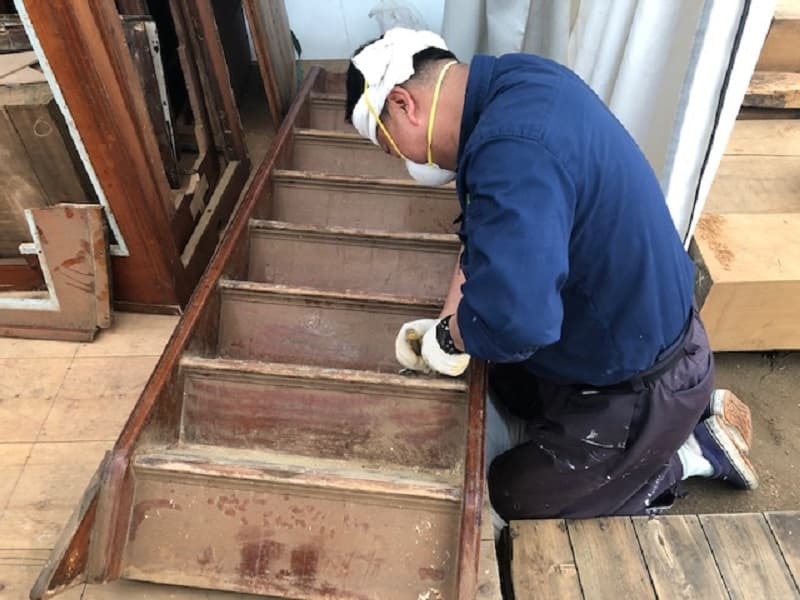 The old paint and varnish has to be stripped from all the deck structures as well as the main staircase to find the location of screws, which are hidden by years of dirt and old varnish.