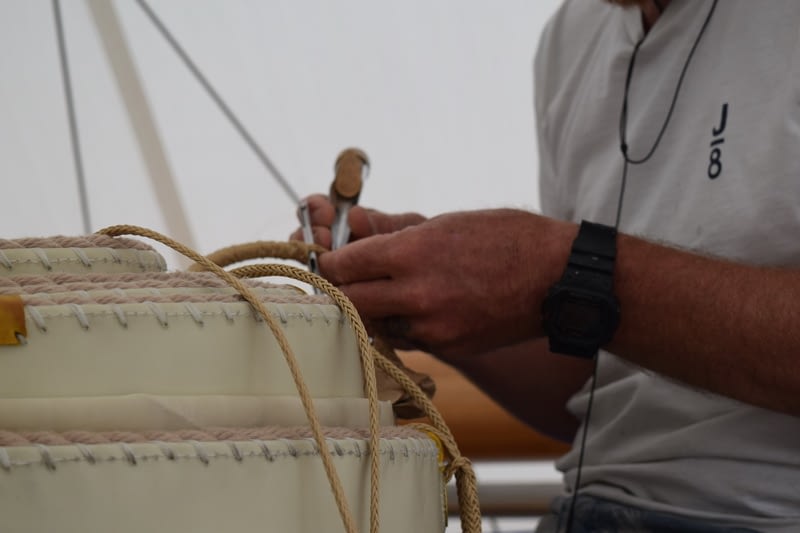 Nat is reinforcing the main sail (above and below). The plan for setting up the main sail calls for a day with no rain and little wind, so the riggers are watching the weather patterns very closely. 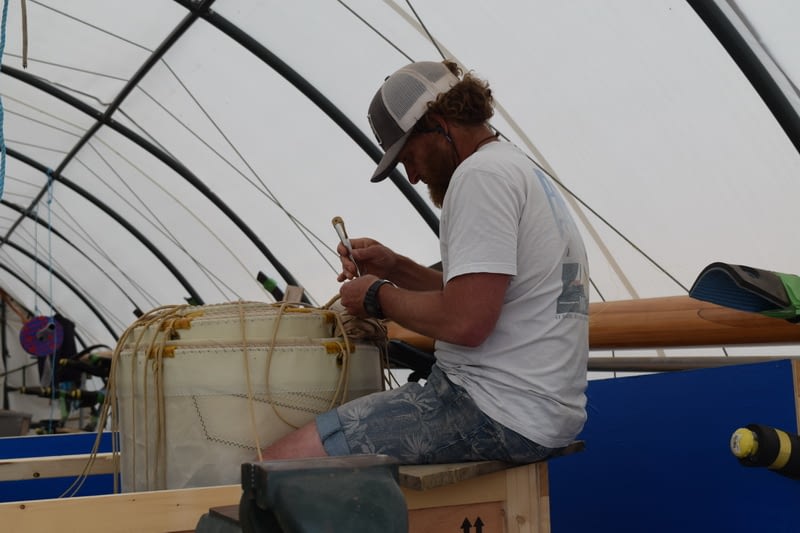 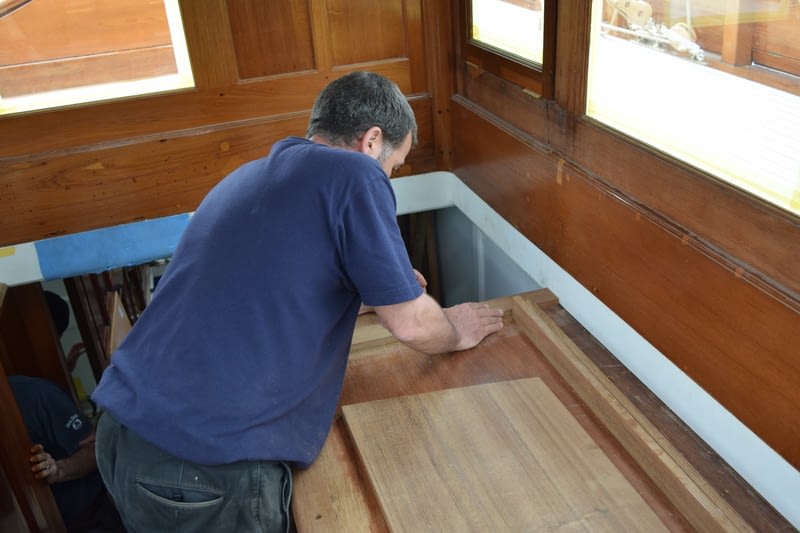 Paul is building a hollow panel that will take the wiring for the navigation electronics. The panel will separate the navigation area from a light and ventilation box in the cabin below. 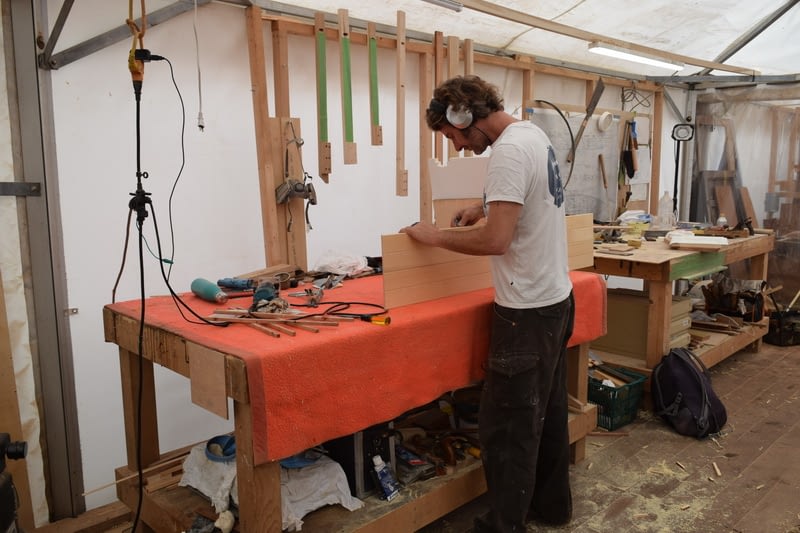 Billy is making removable panels that will hide the electrical panels that have been installed in the backs of cabinets. The breakers and other parts of control systems are hidden, but have to be accessible for maintenance. 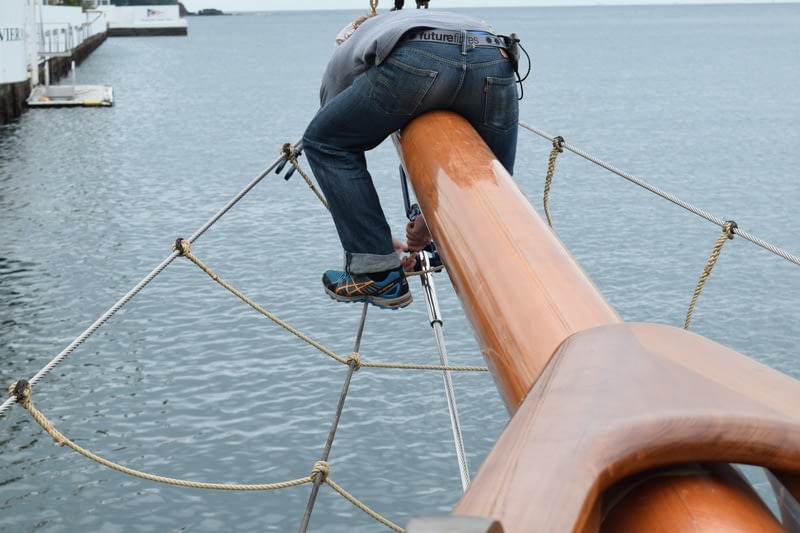 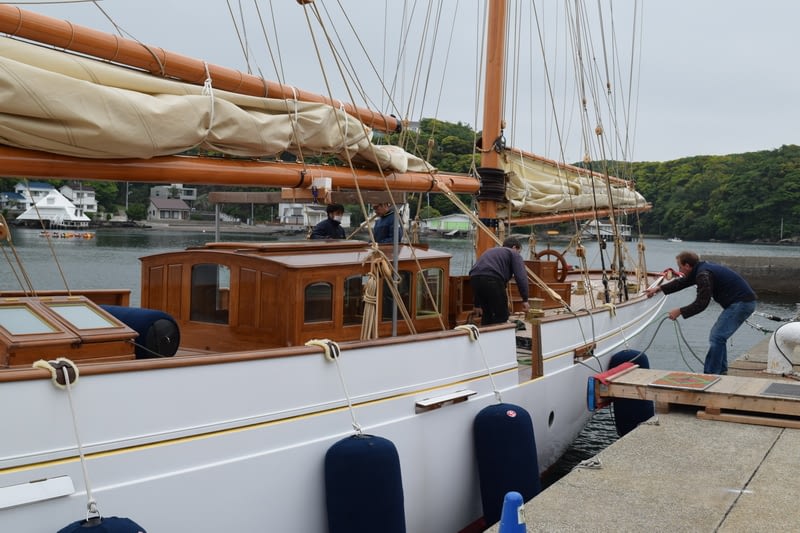 Today Cynara left the quay for the first time, on a short trip around Koajiro Bay to check the engine, rudder, and drive train. Chuck and Nat completed their rigging work in the morning (top), while Paul and Ben were checking everything up until the last minute (above). The engine trials today included running the engine at low, medium, and high revolutions to check oil temperatures and ensure there are no issues with the system as a whole. This is done in forward and reverse to check that the propeller is feathering correctly. Some basic turning maneuvers were done to check that the rudder and steering mechanisms are all working as expected. 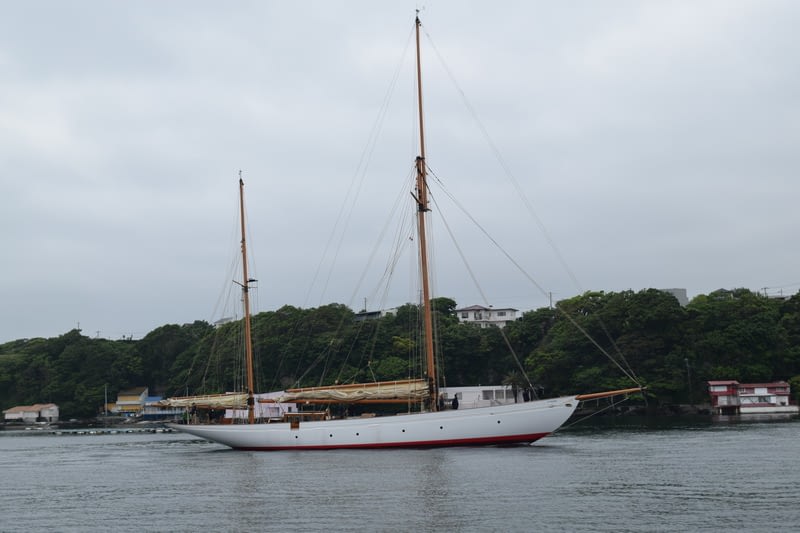 It was the first time she’s been untethered to land since the restoration began, and it was a beautiful sight. It was a great opportunity for the helmsman to get the “feel” of the boat and to take notes on her turning circles, hull speed and different engine revolutions. 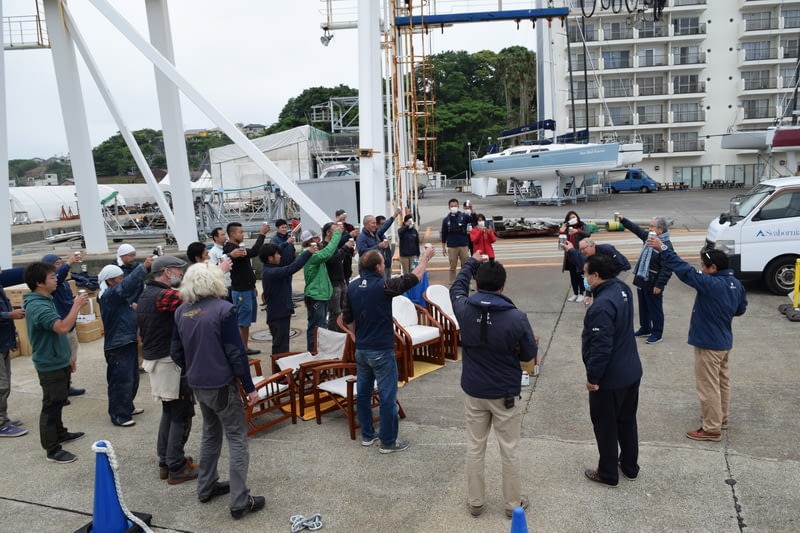 The trip was a big success, with no issues. The boat performed well and everything ran smoothly. Some of the team had joking said that it was traditional for lots of beer to be drunk after a sea trial. (in Europe, the crews find many excuses to drink beer on the dock after tying up, stowing the rig, and a wash down. It’s not so much a tradition as a habit.) Mr. Watanabe surprised everyone by bringing several cases of beer and leading a toast to the success of the trial. 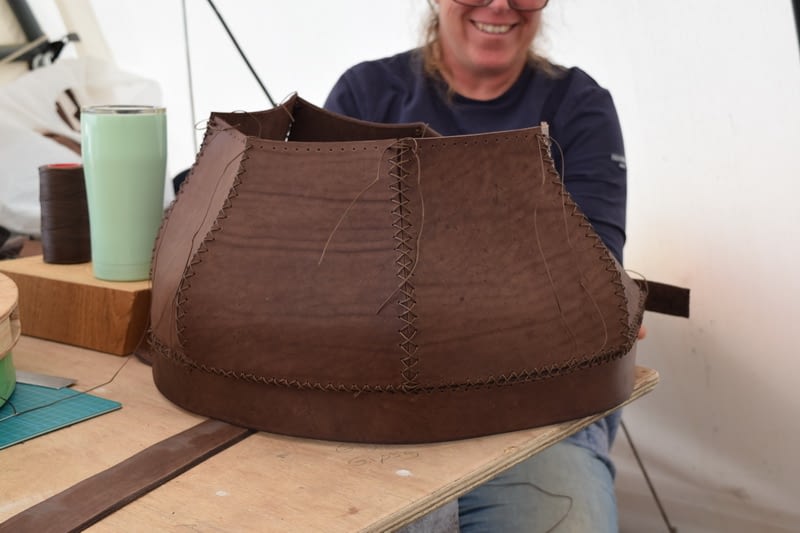 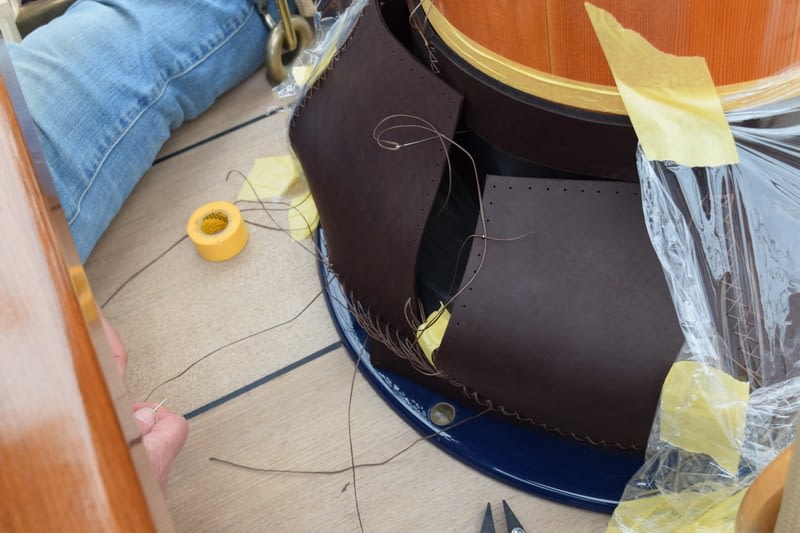 Nikki is putting the final touches on the leather boot that goes around the mast base, covering the wedges that hold the mast in the deck. This is the kind of detail—a touch of natural elegance—that is making Cynara a quality restoration. 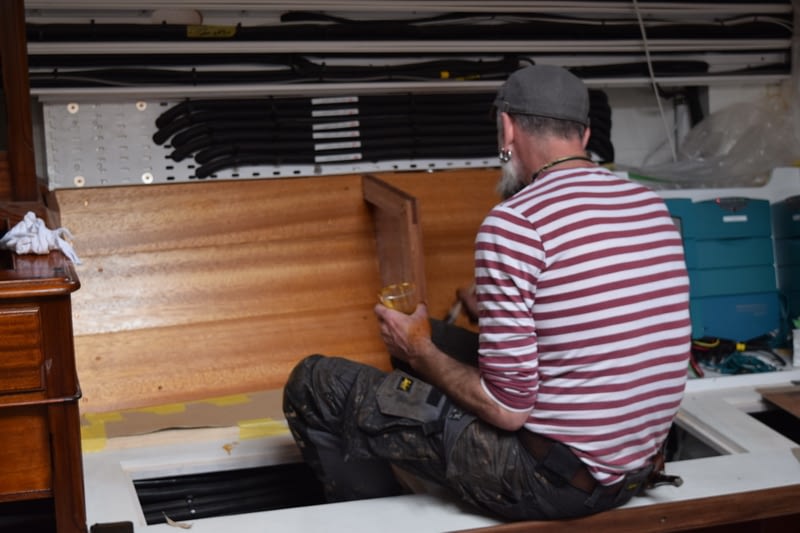 John is shellacking some of the interior furniture. Many interior parts can be shellacked in the work tent and then installed. But there are quite a number of parts that can only be shellacked after installation, and the limited space adds difficulty to the task. 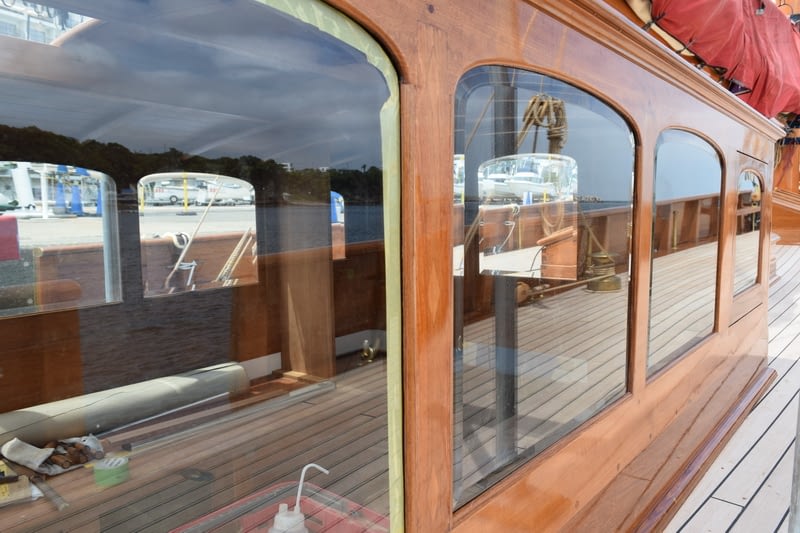 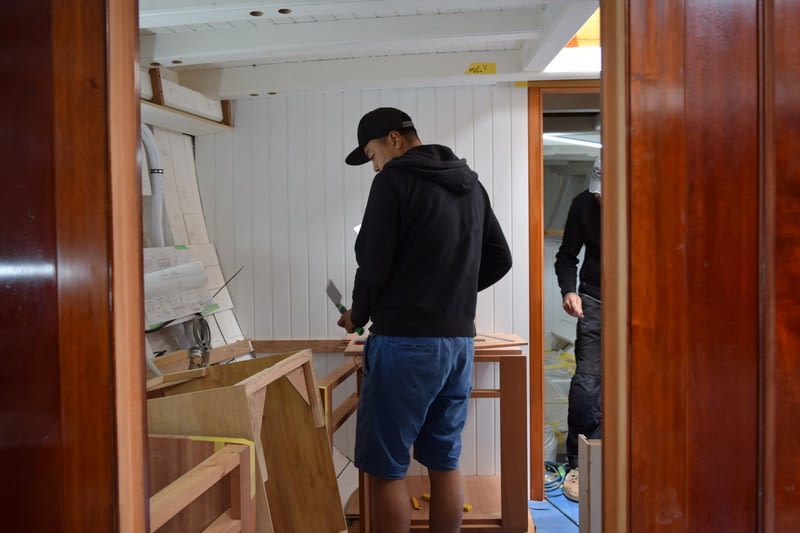 Because most of the recent interior work is being done on visible parts, it feels like the pace has quickened. The windows of the deckhouse are in place (top), and the galley and pantry (above) are starting to take shape. 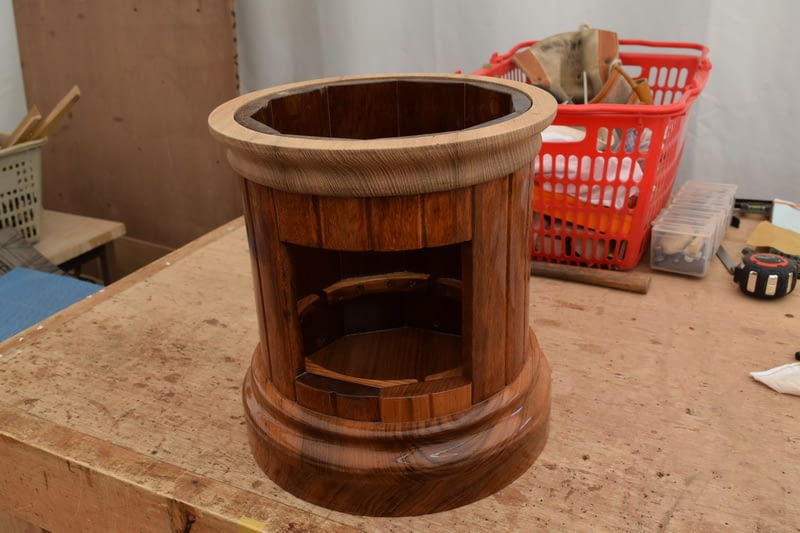 Kawashima has finished restoring the mount for the compass. (You can see it in an earlier state in the blog entry of March 17.) A wooden ring at the top has been added, allowing us to use a new compass binnacle. The original is very worn and the metal has worn through from years of polishing. It has also taken some knocks and lost some of its shape. We’re hoping to get the original restored and eventually installed on this pedestal; meanwhile, we’ll use a compass binnacle that—while not as old as the original—is not new. But it’s a close fit and should do until the original is restored. 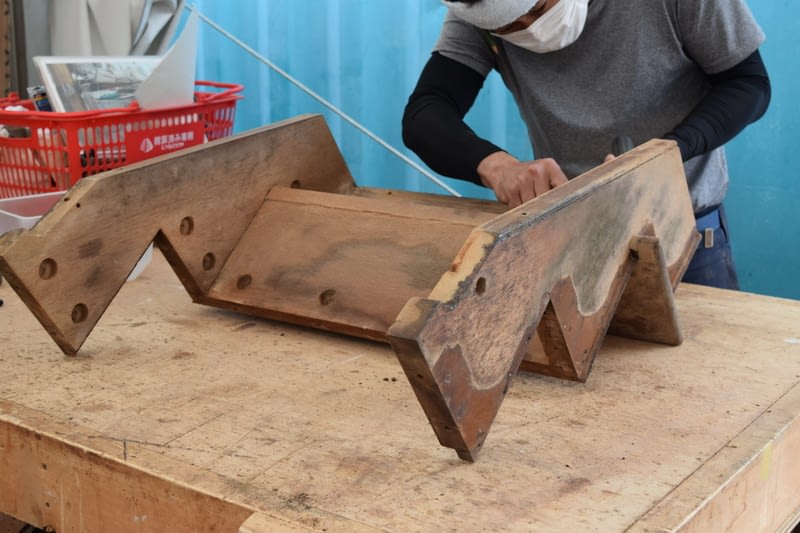 Now Kawashima has started restoring the main deckhouse stairs that lead from the deck to the deckhouse. 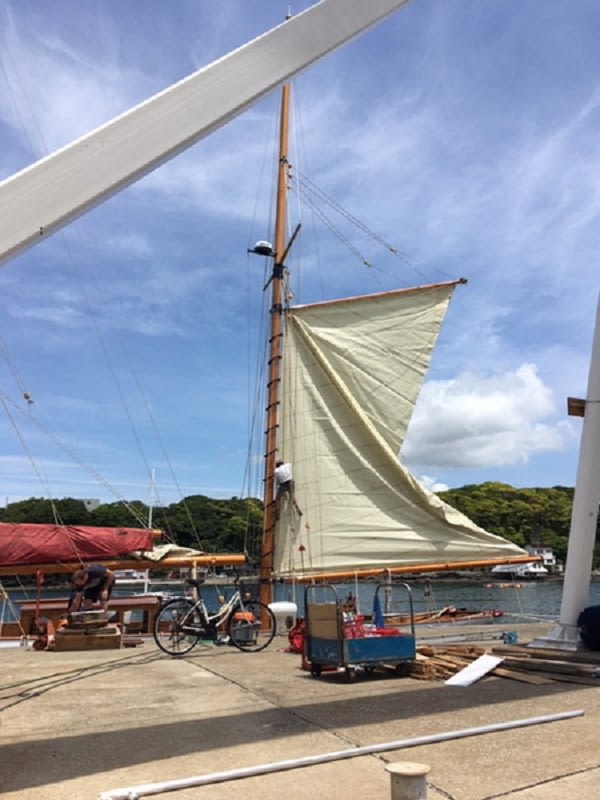 The mizzen sail was raised for the first time today. The color of the sails and the hand-sewn stitching was something impossible to replicate in Japan. The subdued beauty of the sails goes perfectly with the design of a classic yacht like Cynara.