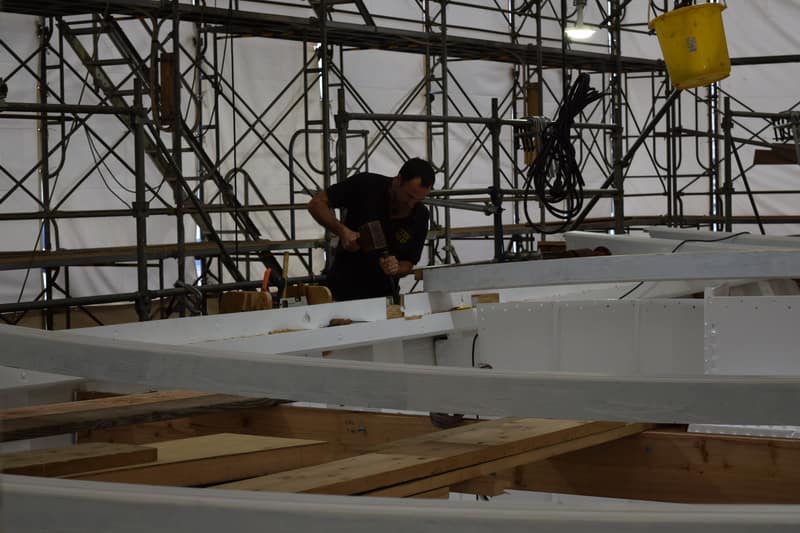 It’s only April, but inside the tent it is hot enough to feel like summer. 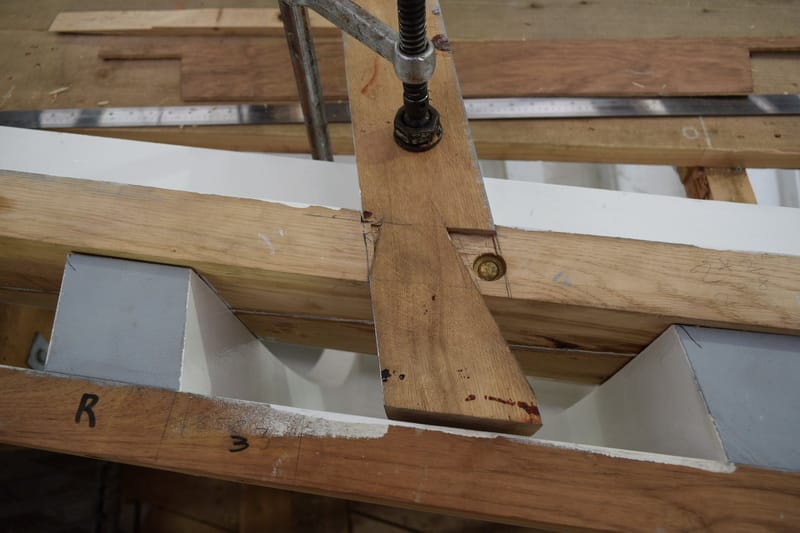 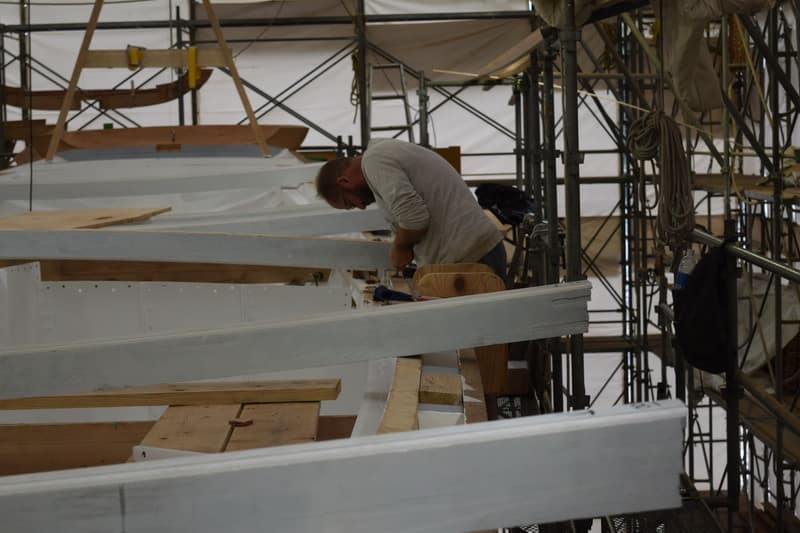 Lewis and Richard are continuing work on the deck beams. 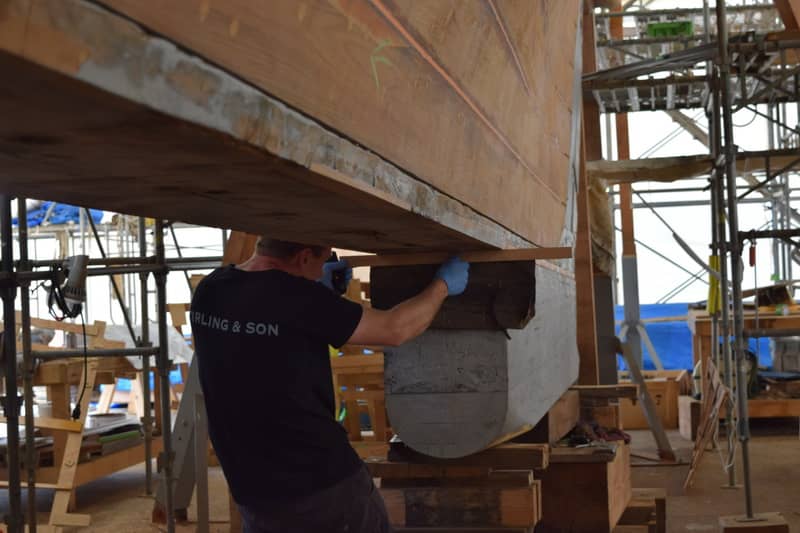 Checking out the keel before bringing the ballast in for installation. Ben had removed the end of the strongback when he fitted the false keel, a piece of wood that fits behind the lead and fills the gap between the lead ballast and the rudder. 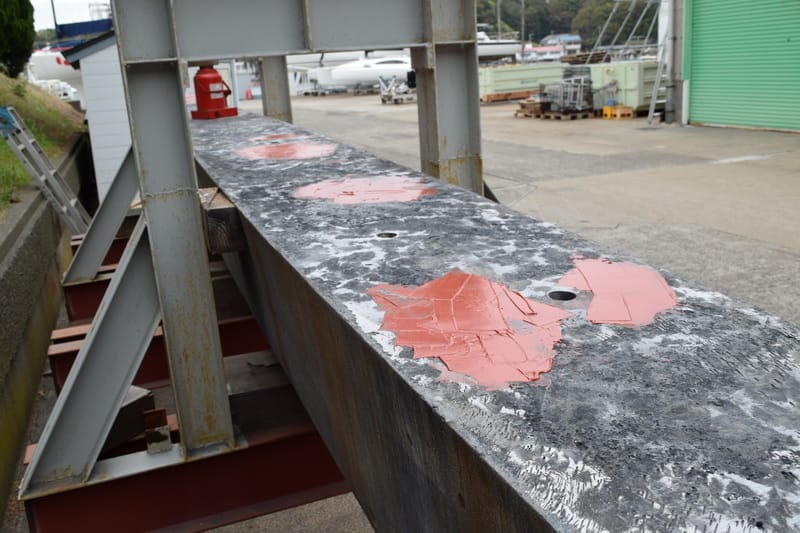 The top of the frame holding the ballast will be removed in preparation for being transported into the tent tomorrow. The ballast alone weighs some 25 tons, so moving it several hundred feet into place under the boat is not an easy thing to do. 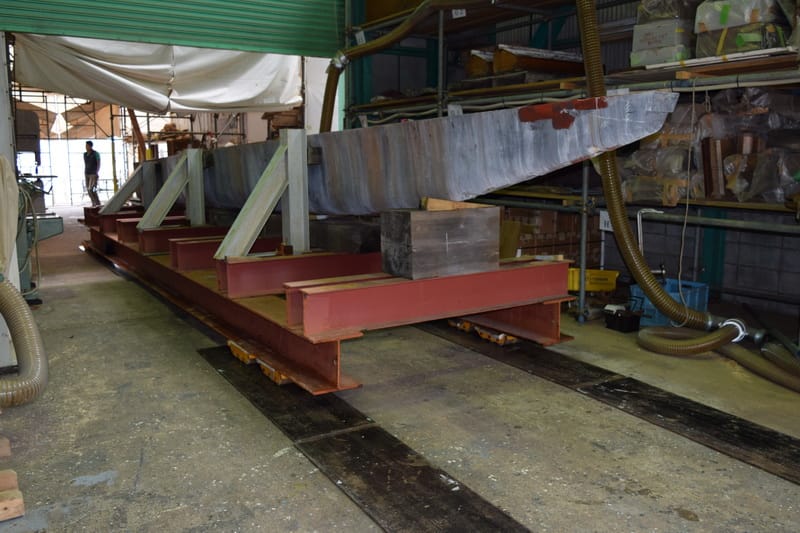 We had to lay down steel plates in the direction of travel and have placed 8 machine skates, two on each corner, under the frame. The skates are meant to carry 6 tons each, so they should be enough for the heavy ballast. The whole contraption was dragged inch by inch into the shed using cable winches. 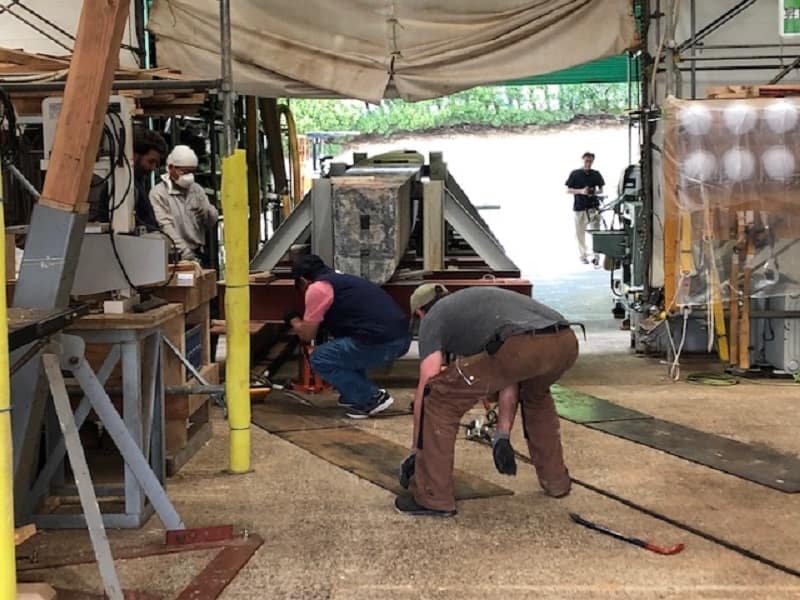 When set up correctly, the 26-ton ballast and frame rolls very easily, but changes of direction take time and effort (above). The steel plates have to be set in the correct position, and all 8 sets of skates have to be aligned each time. If they’re not aligned right, there is a lot of resistance. Tight turns are the most difficult. 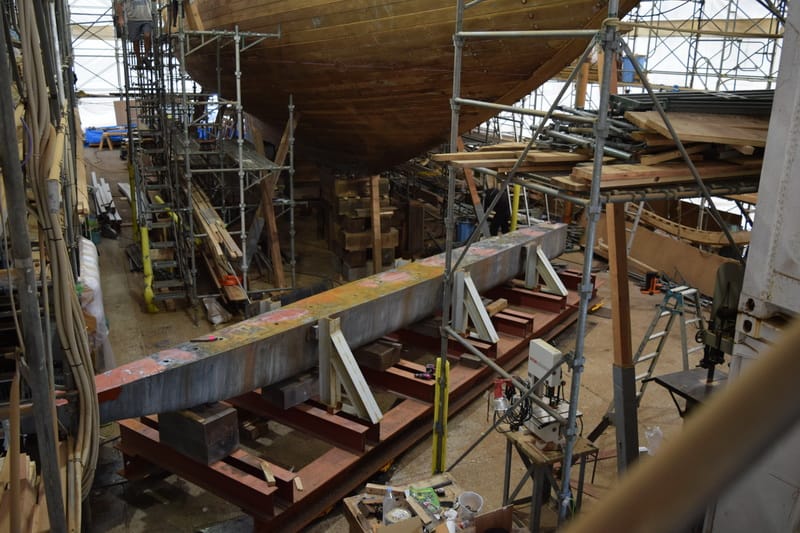 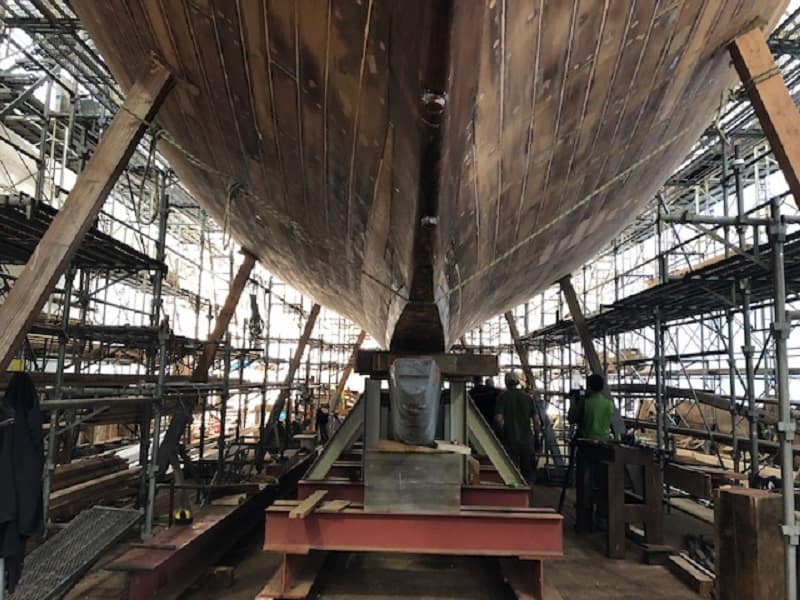 Today the ballast was wrestled into place under the keel. Staff who weren’t involved were given the day off. As the ballast is being fitted, the ship is only supported on the centerline at the fore and aft extremes, while the shores on each side are keeping the boat vertical. Without the centerline support, the boat is unstable and any work inside her might create unwanted vibrations or imbalance. Until the ballast is in place and the centerline is once again supported, it’s best to keep everyone not needed away from the site. 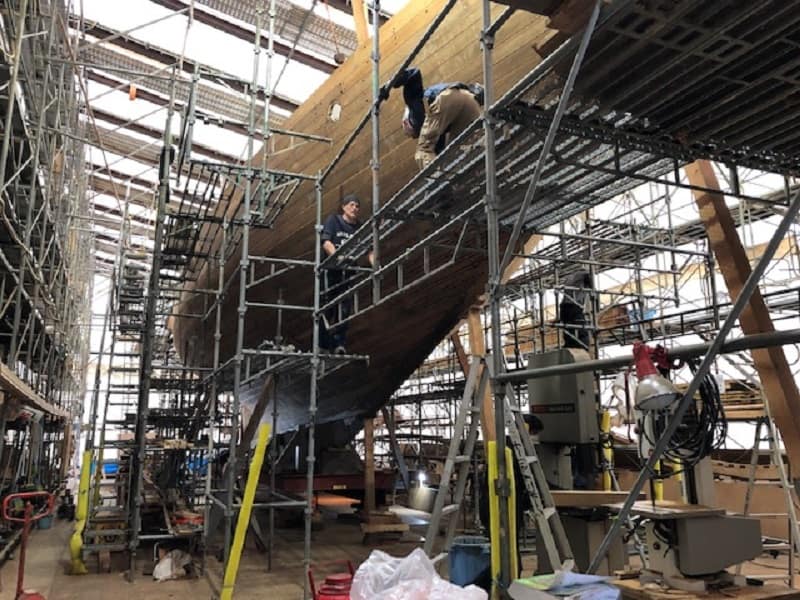 We started today with the restoration of the scaffold that was removed to move the ballast yesterday. 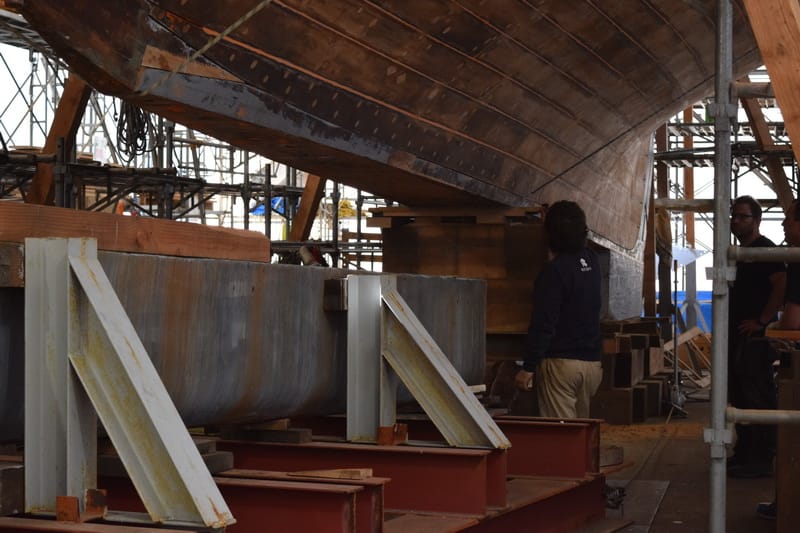 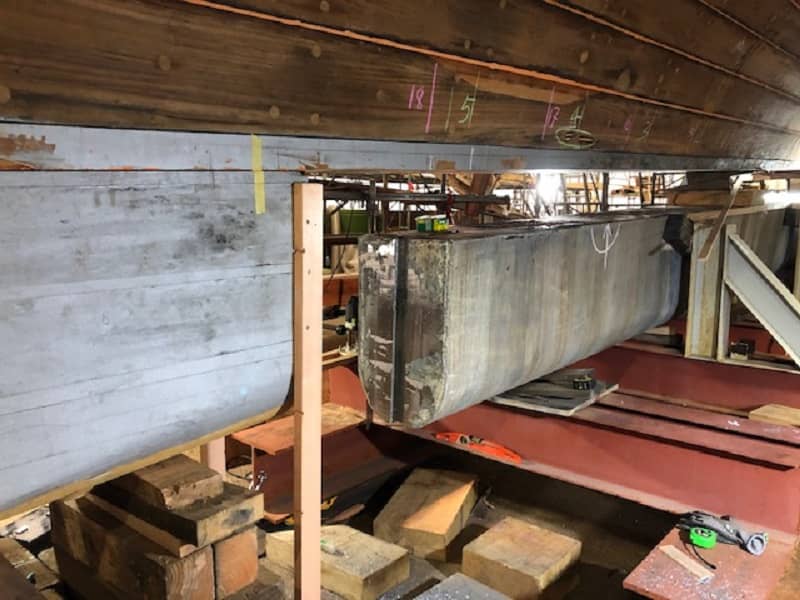 “Golden Week,” a stretch of 10 consecutive holidays, starts tomorrow, and there will be no deliveries during that time. We’ve arranged to get the bolts and washers for the keel installation all ready, so we can work throughout the holidays. 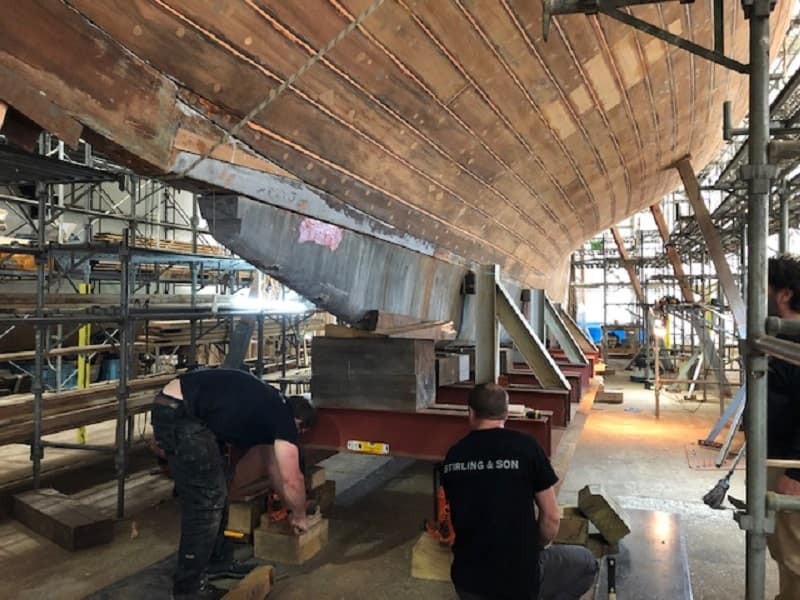 Today, the ballast fitting, beam installation, and deck structure repair are continuing. Paul, Ben, Daniel and Demitri have been carefully operating the four jacks at each corner of the frame to raise the ballast and get the bolt holes to line up perfectly. 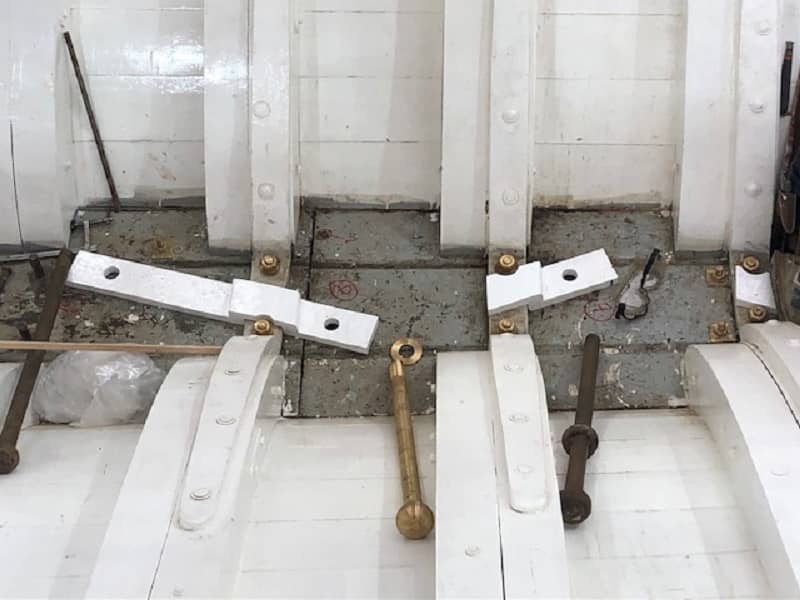 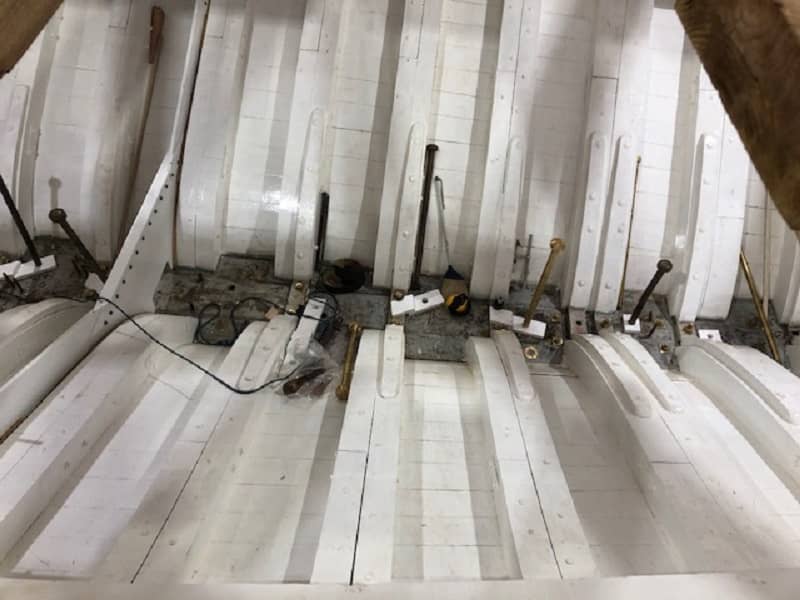 The hardware to secure the keel from the inside of the ship has been painted, and the keel bolts are starting to be installed. 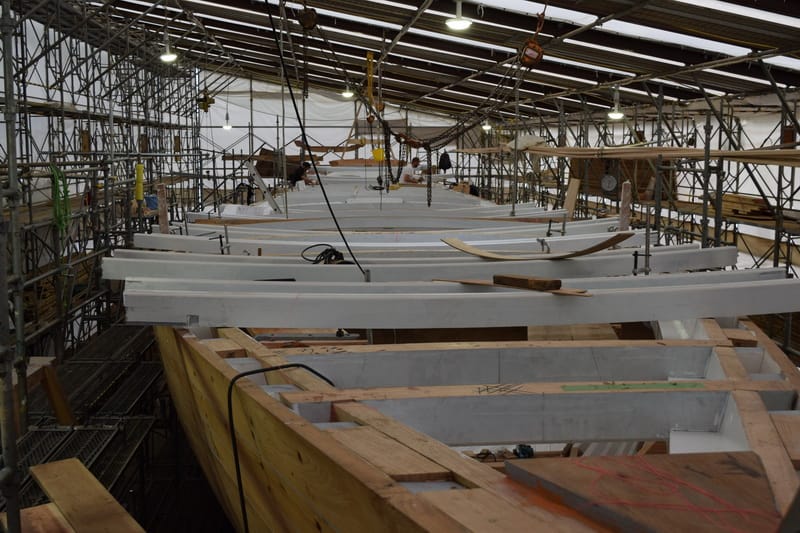 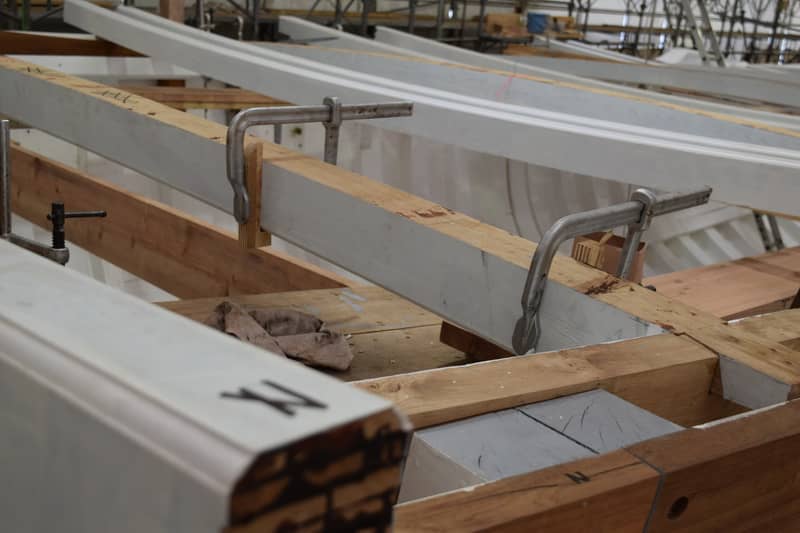 Lewis and Richard have continued installing the beams.

We had a meeting today regarding the interior walls, furniture, etc. materials. As much as possible we’ll repair, restore and reuse the old materials, but we need to select new material—the same kinds of lumber to match with the old material. 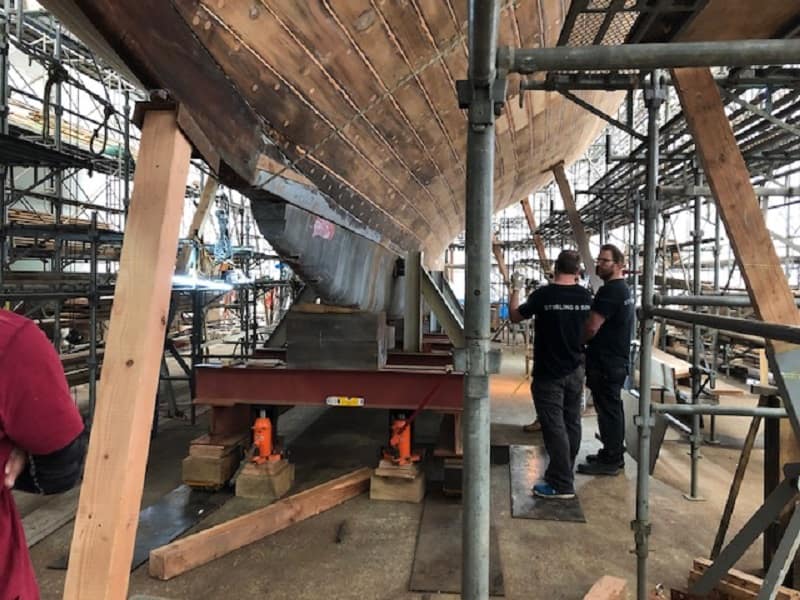 The installation of lead keels has reached the climax. Paul is directing. 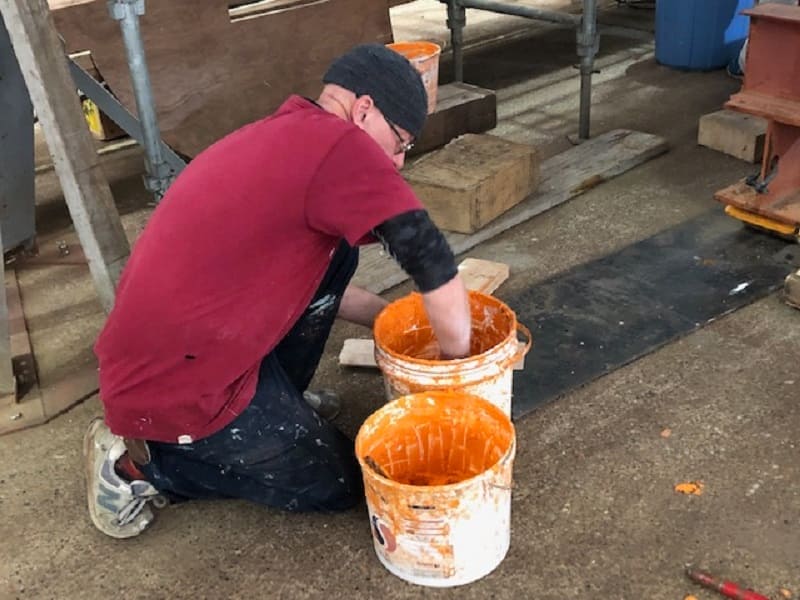 The exact position was determined in the afternoon, and red lead putty was put on the top surface of the ballast and the underside of the wood keel. This created a seal and helped fill any voids or hollows. That wraps up the job of transporting the ballast to its proper place under the keel.