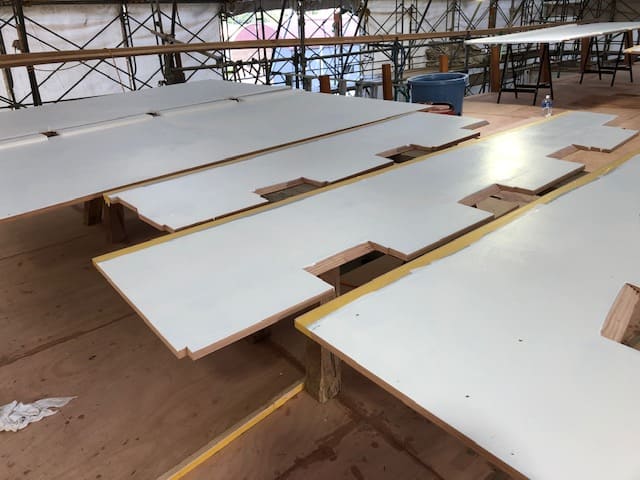 Preparing the interior floor, or sole, which will be laid in two phases. These 19mm plywood panels are cut, fitted and then painted before being installed. The painted side will face down toward the bilge so it can be kept clean and bright. 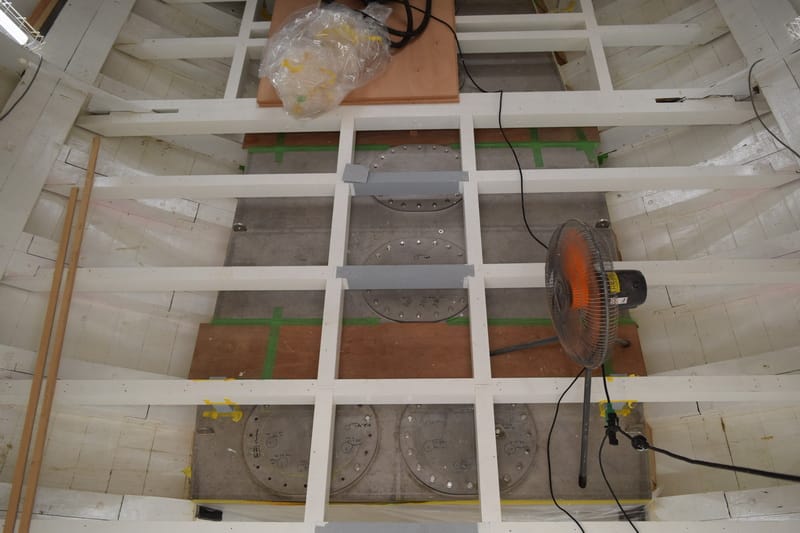 Sole bearers are the beams that support the flooring, and they are also painted. These are the bearers that span the tank area. 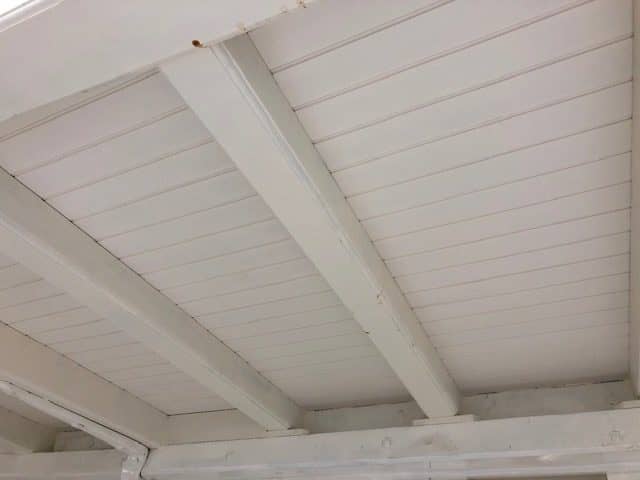 The subdeck (above) has been laid. The underside of the subdeck was lined with Canadian cedar to imitate a traditionally laid deck. The subdeck itself is 19mm plywood from Bruynzeel, Holland, which is one of the world’s best manufacturers of quality plywood. When the top layer of teak planking is laid, the deck will consist of three layers, resulting in a very strong structure. 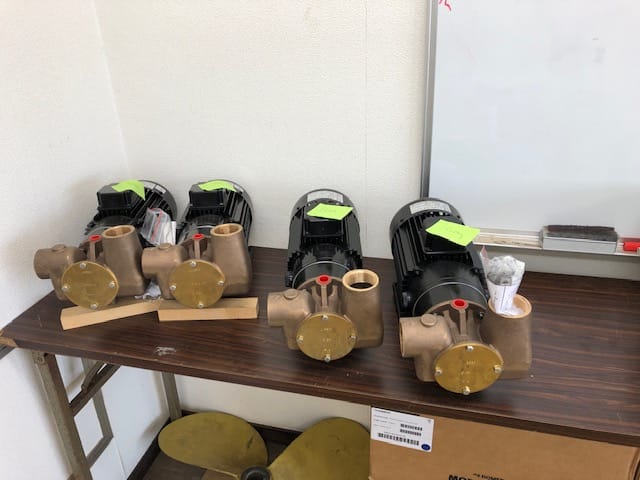 The engineering-related parts have been grouped and labeled, prior to installment. 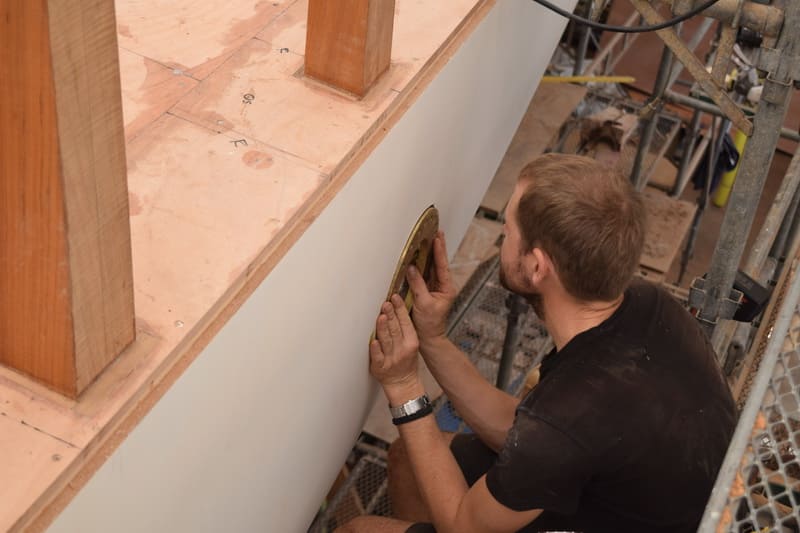 Mattis is installing the portholes. 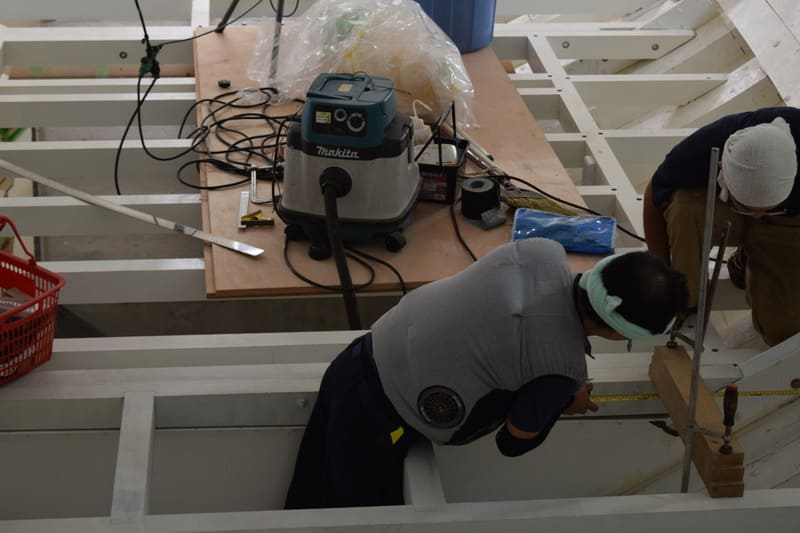 Work on the inboard flooring continues. We had a meeting with a steelmaker today to discuss how to strap the tanks down using steel bands attached to the ship’s wooden frames and bearers that cary the tanks. 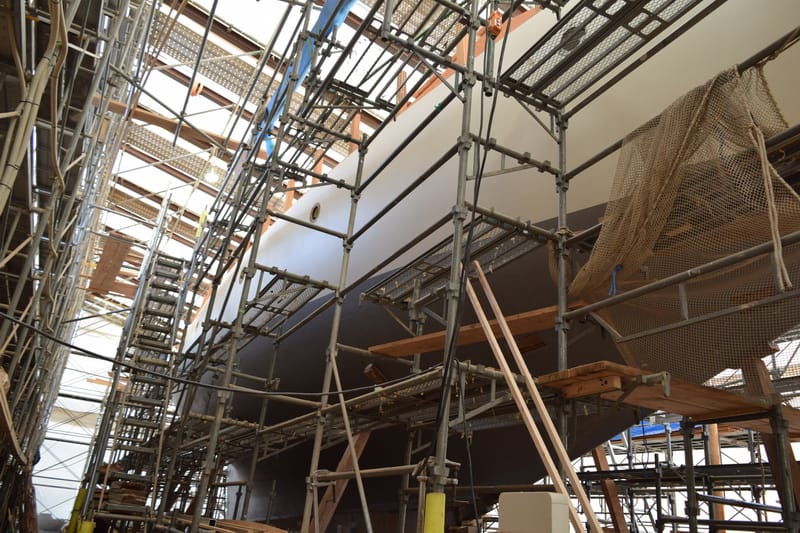 The priming of the bottom of the hull is done, and will eventually be painted red as before. 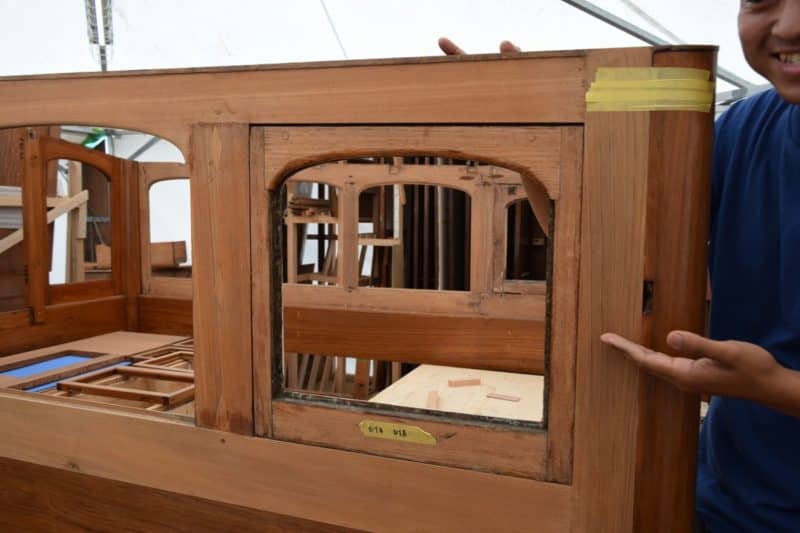 Hashimoto is repairing the window frames of the main deckhouse. Most of the original parts are of good quality and can be restored and used. The teak planking that forms the outer layer of the cabin top will be replaced, however—not because of rot or damage—but years of sanding has left the planking thin and uneven. 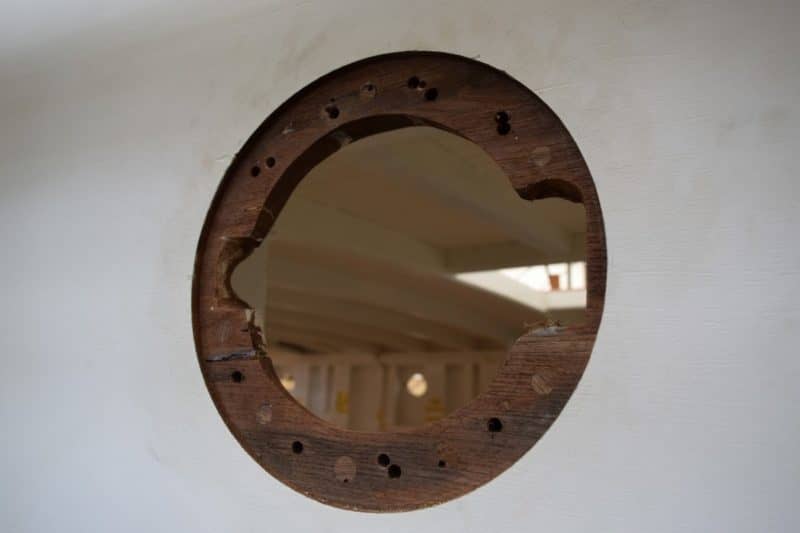 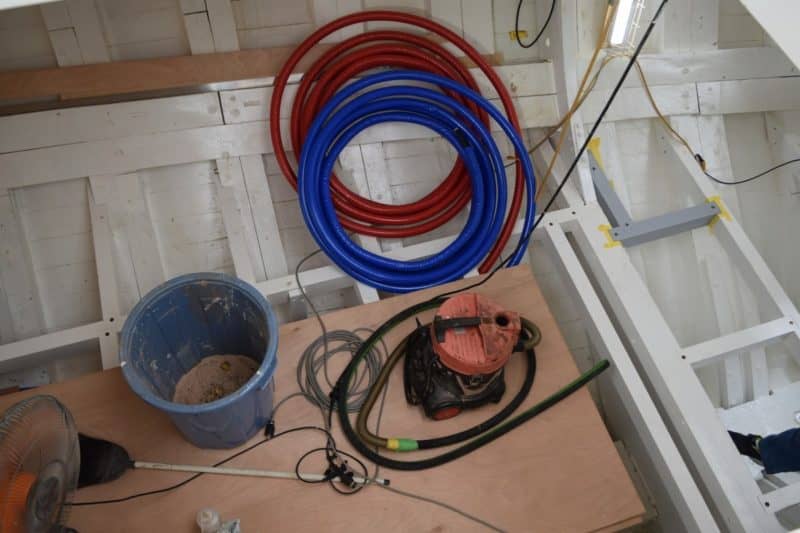 Work on the piping has begun, and Paul was using a laser beam to establish datums for level and vertical measurements. 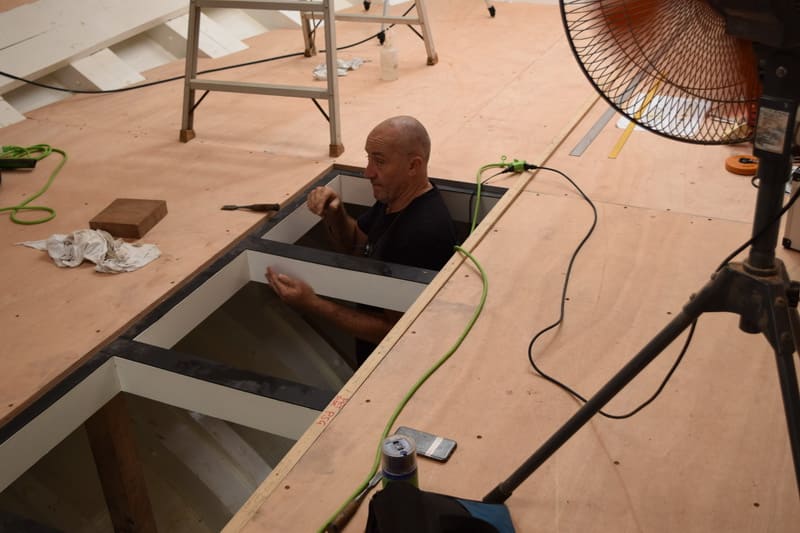 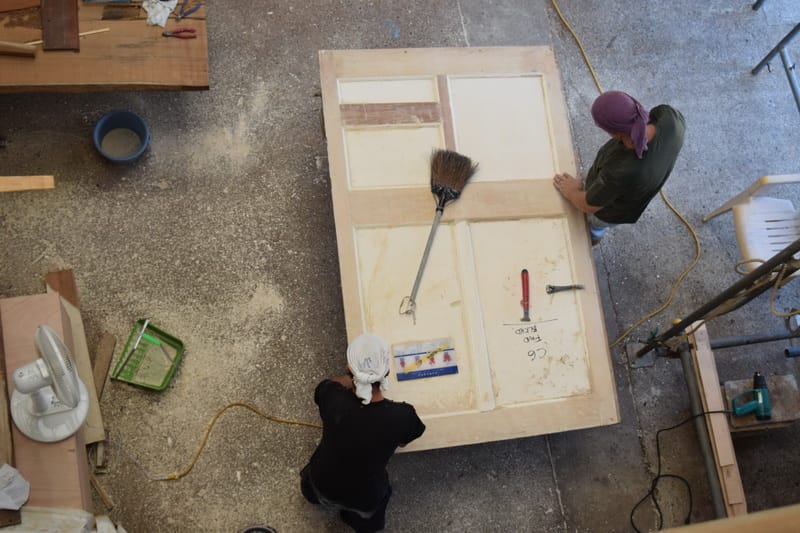 The Japanese team members are removing paint from old walls to get a clear look at the panels and see if any were salvageable. It was decided that it would be better to build all new panels, which will give us the added advantage of making the panels to size and making any changes with having to adapt the original ones. The original frames were made of poplar so we’ll make the new ones of poplar too. 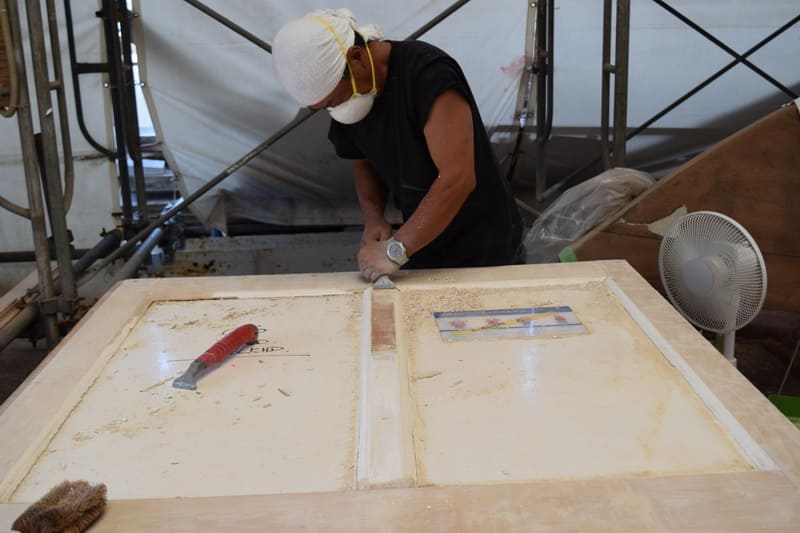 We discovered that the panels within the frames were made of Masonite, an early form of hardboard that was a precursor to modern MDF (medium density fiberboard) that was a brand new product when the boat was made in 1927. Amazingly, some of these panels are in good shape and could be used again, but we decided to replace them with panels made of Tricoya. Tricoya has the appearance of MDF, but it’s completely impervious to water as it’s flat and grainless. It’s also a brand new product, so we feel there’s a certain symmetry to the choice. 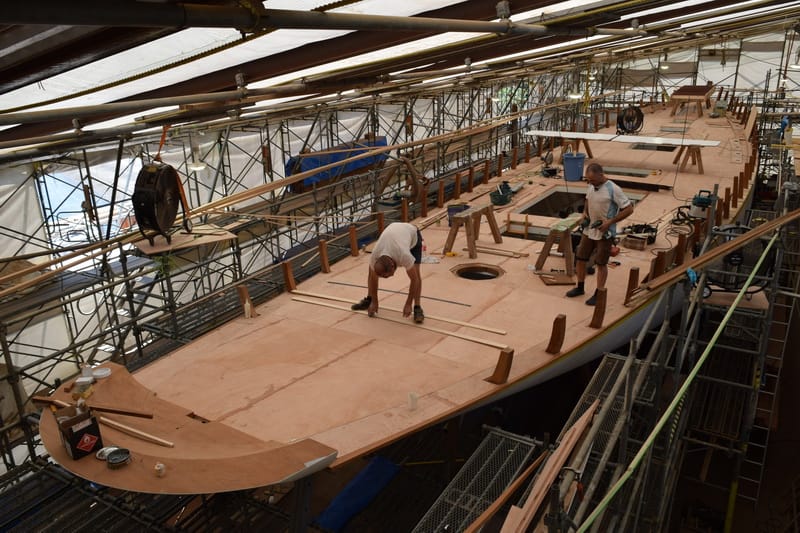 The completed subdeck can be seen in full (above). 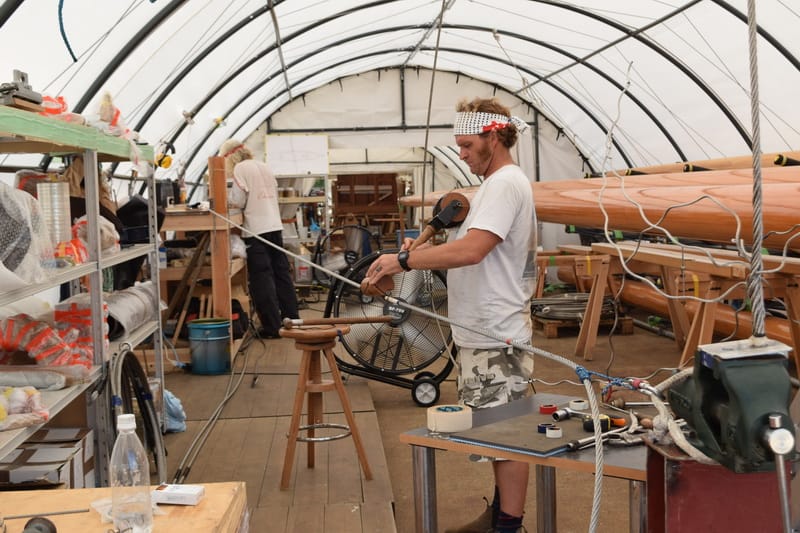 Nat (above) is working on the rigging wires in the mast tent.